This beautiful story is about Bokuden, one of the greatest Japanese swordsmen. Read on to discover it! 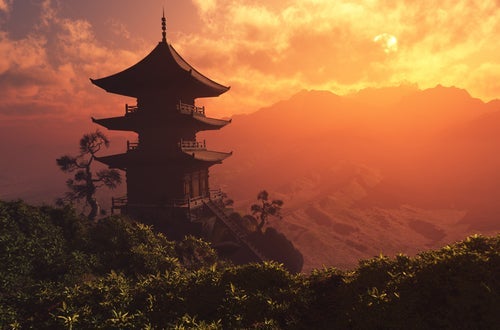 This beautiful story is about Tsukahara Bokuden, a legendary sword fighter from 16th century Japan. He practiced martial arts and was renowned for his talent. However, he was best known for his wisdom.

The story goes that Bokuden had three children. He wanted to test them to see how cautious they were. To do so, he put a heavy headrest on top of the door and left it partly open. Then, he called his oldest son, Hikoshiro.

“Only a fool tests the depth of water with both feet.”

Bokuden’s oldest son was well-loved by everyone. He was very sweet. The story goes that when his father called him, he walked up to the door and pushed it carefully. He noticed that it was heavier than normal and figured that something had changed.

Hikoshiro carefully felt along the upper edge of the door. There, he discovered the headrest and gently took it down. Bokuden was pleased with his son, but he didn’t show it. Later, his son left the room and left the headrest where he had found it.

Different Reactions from Bokuden’s Other Sons

A few days later, Bokuden wanted to test his second son in the same way. People recognized Hikogoro for his agility and dexterity. He wasn’t cautious or careful, like his older brother, but he was very sure of himself and his skills.

The father called his son into the room. Hikogoro quickly got up and headed to the door. Without thinking twice, he pushed it open. The headrest fell, but the boy was so agile that he caught it midair. Then, he put it back in its place. Bokuden watched, pensive.

The time had come to test his youngest song, Hikoroku. He was the most impulsive of the three, but also the happiest and most loving. Bokuden loved him a lot but worried that he wasn’t capable of passing the test. He was right. Bokuden called his son, just like he had done with the other two.

Hikoroku rushed to the door and pushed it open enthusiastically. The headrest fell and hit his chonmage (a traditional Japanese hairstyle). The story goes that when the boy felt the headrest hit his bun, he took out his sword and cut the object in two before it hit the ground. Then, he laughed and seemed to feel proud of his reaction.

According to the story, Bokuden worried about his youngest son’s reaction. He believed that such an impulsive person would only bring disgrace and ruin to his house. Tradition said that Bokuden should cut off his youngest son since his behavior showed a lack of awareness or wisdom.

However, Bokuden called all three sons and told them a story about something that had happened to him years before. He had a student who was quicker than everyone, both mentally and physically. He was used to always winning in combat.

One day, he was walking down one of the village streets and walked right by a very nervous horse. The animal was so unsettled that when it felt the presence of the disciple he kicked. The young man was so agile that he managed to avoid the impact with a catlike movement. Everyone who saw what happened applauded his skills.

That same day, the student saw Bokuden and proudly told him what had happened. Bokuden listened attentively, but when his trainee finished his story, Bokuden expelled him. He said he never wanted to see him again. Everyone was stunned. Why didn’t their master appreciate his student’s agility?

Bokuden’s three sons listened to his story in rapt attention. The oldest son stayed quiet and seemed to reflect on what he had heard. The middle son looked intrigued, but the youngest son seemed confused and unsettled. “Why did you get rid of such a skilled man? Did you worry that he would take your place?” he asked.

The story goes that Bokuden answered: “A man who isn’t able to predict danger, only react to it, doesn’t deserve to be my disciple. If he had been a wise man, he never would have walked so close to the horse”. The three sons stayed quiet. The second and youngest sons understood the message without their father having to explain it, and they left the room with their heads hung in shame.