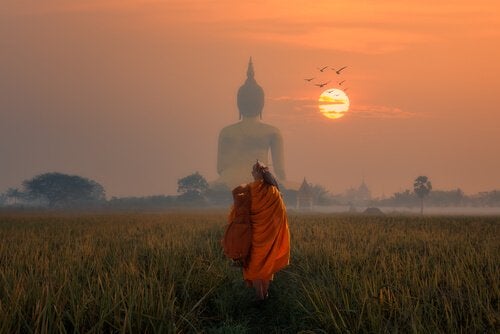 This beautiful oriental folktale is divided into two parts. Each one of them has its own lesson. The main character of the story is Tumushido, a very wise old man who lived thousands of years ago. This master is still remembered today for everything he taught.

The first part of the folktale says that there once lived a samurai in a remote village. He was one of the fiercest warriors. Everyone knew him because he was extremely irascible. He couldn’t tolerate people contradicting him and he had a huge ego.

The master reacted with such fierceness and agility that everyone feared him. If someone contradicted him, he would simply take out his saber to make the other person feel intimidated. This warrior went on a trip and passed through a small village. In the village, he saw that a lot of people were headed to the same place, and this made him curious.

The samurai decided to stop one of the men and ask him what was going on. The man said they were all going to master Tumushido’s house. The samurai felt confused.

“Who is Master Tumushido?” he asked. The man was shocked. He couldn’t believe he didn’t know who he was. “He’s the wisest of all masters. Every afternoon, at this time, he shares his wisdom. Every person in the village goes out to see him.”

The samurai felt very curious about this. He had never heard about master Tumushido, but he could tell how respected he was. His pride and arrogance went off the charts. He couldn’t bear to think someone could be superior to him.

The meeting with the master

The samurai couldn’t wait any longer, he had to listen to master Tumushido once and for all and see if he really deserved to be so famous. He then proceeded to go to the place where everyone was gathered. When he got there, the master was saying how words are the most powerful force on Earth.

The samurai yelled, “You’re such a fool! The greatest force on Earth is the saber, you ignorant man!” After that, master Tumushido got up from his seat and yelled, “How dare you to say that! You’re so stupid and ignorant!”

After hearing this, the samurai got very angry. He approached the master with his saber and threatened to decapitate him. Tumushido started to beg for his life. He said, “Don’t kill me, courageous samurai. I’m sorry I offended you. I’ve discovered that your saber is the most powerful thing on Earth.” This calmed the samurai down. He then said, “I forgive you. You’re a good man.”

When a second samurai heard that story, he felt really curious. He wanted to meet that wise man and show him that he couldn’t be dominated by words. He proceeded to go to the village, convinced that he could prove that Tumushido was a phony.

When he got to the village, master Tumushido was in the middle of the square. He was talking to a group of people who were carefully listening to him. The second samurai infiltrated himself in the crowd. When no one expected it, he yelled, “I challenge you, you old phony! If you’re so wise and powerful, show me you can fight me and defeat me!” The master stared at him for a moment and proceeded to give a sign that indicated he accepted the challenge.

The public made a circle around the samurai and master Tumushido. The master closed his eyes and sat down in a submissive way. The warrior thought he had intimidated him and decided to provoke him. He started yelling at him, screaming every single insult he knew. But Tumushido didn’t react. The warrior kept this going for hours. He finally decided to leave and, before doing so, he indicated that Tumushido was, in fact, just a phony.

After the second samurai left, the public felt puzzled. They all said, “How come you let him speak to you and insult you like that?” “If someone gives you a gift and you don’t accept it, who does the gift belong to?” he asked. A young man in the public said, “To the person who wanted to give it.” Then, the master proceeded to explain, “The same thing goes for anger, insults, and hatred. When you don’t accept them, they continue to belong to the person who originally said them.”

9 Buddhist Sayings to Reach Internal Peace
There's something about Buddhist sayings that goes beyond the religion. They've become accepted in parts of modern psychology, and can help you live a happier life. Read more »
Link copied!
Interesting Articles
Stories and Reflections
Nine Alan Watts Quotes Worth Reflecting On

Throughout history, and especially since the creation of the Internet, many processes and techniques have been developed to enhance creativity,…

Culture
Five Tips on How to Study without Getting Bored

Although some subjects probably don't interest you at all, you sometimes have to study them either because it's necessary for…