Blaming Others as a Strategy

Blaming others as a strategy and a means of shirking responsibilities and the consequences of your mistakes is never a good idea. In the end, it only leads to fake relationships with others, the kind that become an obstacle for your personal growth. 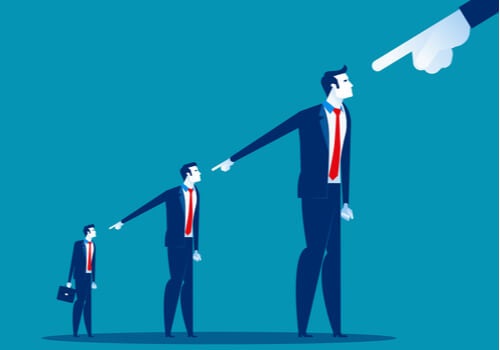 Usually, blaming others is something children do. This is because their cognitive and moral development keeps them from understanding the importance of taking responsibility for their actions. Thus, they’d rather opt for avoiding punishment when they know they did something they shouldn’t have. Unfortunately, many immature adults continue to behave this way in various situations.

Blaming others first becomes a habit and then a strategy. Mainly in people with a high degree of narcissism or in those who lack autonomy. This behavior supposes a stagnation in the evolution of emotions and values. Anyone who acts this way is obviously in pain and, thus, inflicts it upon others.

Most commonly, there’s fear, pent-up anger, and sadness behind the pattern of blaming others. And as long as they don’t use healthier strategies in their relationships with others, such feelings will remain and even become more intense. As you can see, it isn’t an effective strategy. On the contrary, it magnifies their difficulties.

The reasons to blame others

Generally speaking, there are two main reasons why some people choose to blame others as a strategy for coping with conflict. The first one is narcissism and the second is the lack of autonomy. You might think that these two characteristics are exclusive, but they aren’t. In fact, it’s very common to find them together.

In addition, it’s very common for a person to develop excessive narcissism. They do so to compensate for their feeling of inferiority. Thus, there’s a paradox. A person believes they should be loved or recognized but they don’t do what it takes to obtain that love or recognition. All the same, it bothers them not to have it. This is when they decide to blame others for everything they don’t achieve.

The second reason this strategy is used is lack of autonomy. As it happens with a child, there’s a lot of dependence on authority and fear of punishment. Then, they blame others in order to avoid a bad experience. However, doing so increases their dependency and keeps them from developing a sense of responsibility.

The behavior of blaming others is apparently fruitful. Firstly, the ego remains intact. This is because, by making a mistake and acknowledging it, you implicitly declare that you’re imperfect and, therefore, not always right. To a person who lacks humility, this is a wound that their egos can’t tolerate.

The difficulty in accepting mistakes isn’t the result of excessive self-love but of great insecurity. Some people think that making a mistake takes away their worth or calls their abilities or merits into question. If, instead, you’re confident and content with who you are, you’ll consider your mistakes normal and something you can learn from.

Then, there are those times when a person blames others because this is the only way in which they can avoid the consequences of their actions. Therefore, they don’t have to correct their mistakes. It’s a childish way of shirking both responsibility and guilt. Anyone who acts this way is hiding from themselves and loses the opportunity to learn from their mistakes. Not only that, but they can’t become stronger and continue to grow.

What’s there to lose by blaming others as a strategy?

Anyone who systematically blames others for their mistakes, pain, and shortcomings is harming themselves and others. The first thing they do is detract from the authenticity and openness of a relationship. In these conditions, it becomes very difficult to build healthy bonds, and they mainly promote toxic relationships.

One of the characteristics that give more value to life is precisely building genuine intimate ties with others. These provide security, strengthen identity, and nurture courage. The artificial ties dented by manipulation only generate a feeling of loneliness in the face of a threatening world.

Similarly, anyone who refuses to assume their responsibilities also renounces to their personal growth and doesn’t learn from their mistakes. This stagnation ends up influencing emotions and distorting the perception of reality. Finally, it only ends up feeding a harmful paranoid posture.

Humility is the antidote against the tendency of blaming others. Contrary to what many believe, learning to take responsibility for the consequences of your actions and mistakes only strengthens and promotes your evolution as an individual.

Stop Blaming Others For Your Problems and Take Control
Blaming others and circumstances is an easy way of not taking responsibility for yourself, a way to excusing oneself for what is happening. But it is also the most effective way of losing control over one's life. Read more »

Nobody wants to have to face adverse situations in their life. However, sooner than later, you'll deal with your own painful experiences. The experience is devastating for some people and…