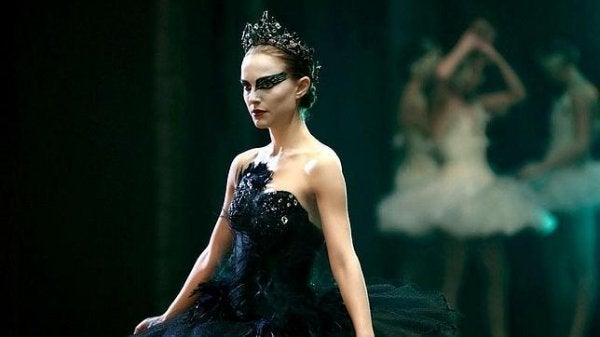 Black Swan was one of the most highly-acclaimed films of 2010. This film starred Natalia Portman, who won the Oscar for Best Actress. The film also caused a lot of controversy because of Portman’s body double. She argued that she didn’t deserve the Oscar because Portman wasn’t the one dancing most of the time. The director, Darren Aronofsky, applauded Portman’s work and said that the body double only replaced her during the most difficult scenes.

The movie Black Swan gives us ballet on the big screen. It’s a psychological thriller based on Swan Lake. Natalie Portman dazzles because her role is a lot more than just a simple dancer. She plays a complex character with mental disorders that become more and more apparent as the ballet’s opening day approaches.

Portman’s acting is astounding and she’s totally convincing. She captivates us from the first moments of the film. Let’s not forget that the actress graduated with a psychology degree from Harvard University. The knowledge she obtained most likely helped her to prepare for the role.

The plot revolves around Nina, a young dancer who lives with her mother and works for a ballet company. The company wants to open the season with a renewed version of Swan Lake. Nina wants to get the role. She’s a very disciplined, methodical, and demanding dancer, but the character requires a wilder and freer side. The film goes hand in hand with the ballet, and masterfully, it immerses us in the protagonist’s personality and her trials and tribulations.

Music, photography, and dance stand out from the beginning. They attract the spectator’s attention and envelop us in a unique atmosphere charged with tension that builds up until the movie’s brilliant finale.

We discover Nina’s personality as the plot unfolds. Her mother was also a danger, but she didn’t achieve the success that her daughter is having. Her mom left everything behind to take care of her daughter. We don’t learn anything about Nina’s father. All we know is that Nina’s mother raised her alone and is extremely protective of her.

Nina doesn’t really have any friends. She simply interacts with her ballet colleagues. The only thing that matters in her life is dancing. Her bedroom is very childish space because it’s painted in pale tones and decorated with countless stuffed animals. It could easily be mistaken for a little girl’s room, someone who hasn’t grown up yet. This room is a reflection of Nina’s world. She’s a very dependent young woman. Her mother has controlled her and she hasn’t yet reached maturity.

Her mother was the one who instilled the passion for ballet in her. She has also possibly projected her frustrations onto Nina. Thus, Nina also makes her mother see that she never accomplished anything nor got that far. This eventually creates a conflict between the two.

Nina has never disobeyed her mother. She has always lived an extremely controlled life and has never had the opportunity to decide anything for herself. This is why Nina has developed a complex personality. She takes her frustrations and impotence out on herself. She injures herself and makes herself throw up. Her mother knows that Nina has these problems. In fact, she tries to control the scratches on Nina’s back by cutting her nails so she can’t keep on scratching and she monitors the amount of time Nina spends in the bathroom.

Nina didn’t have a happy childhood and she hasn’t had a healthy development. Her mother has overprotected her and has taken her frustrations out on her daughter. All this has made Nina an emotionally unstable person. This instability reaches its highest peak when the company offers her a role that causes Nina’s personality to wobble and unfold. Nina is obsessed with perfection and will do everything possible to achieve it, even at her health’s expense.

Swan Lake tells the story of Odette, a princess who was turned into a white swan by a spell. In order to break the spell, she needs the love of a prince. This love eventually fails because a rival intervenes: the black swan. Nina’s company decides to reinvent the story a bit and the role of both swans falls on the same person.

Nina seems to fit perfectly in the role of the white swan, but not the black swan. She lacks spontaneity and is too disciplined to be the black swan. As in Tchaikovsky’s world, Nina has a rival, Lily. She’s another one of the company’s dancers, an undisciplined and carefree young woman who fits perfectly into the black swan role. From this moment on, Nina’s personality becomes destabilized and she begins to obsess over her rival. This brings to light her most unstable and dark side.

As we get into the ballet and meet the main characters, Nina’s personality begins to dissociate. She becomes unable to recognize herself or differentiate between the real world and a dream world.

Mirrors play an important role in the film. They present the distortions that Nina is experiencing. They show us how confused she is in the most critical moments of the film. In this movie, mirrors are powerfully symbolic. Both swans live inside Nina and they’re unable to achieve a balance, a harmony.

Nina lacks a father figure and her mother is absolutely controlling. It’s clear that there are many gaps in her fragile personality. The new rival and the search for that dark side that the black swan role requires will make Nina begin to show the first symptoms of psychosis. Nina will engage in an internal struggle with the two swans who live inside her while her relationships with her mother and her surroundings become increasingly difficult.

The other side of ballet

In addition to the role’s demands and her rivalry with Lily, Nina must face a less friendly facet of ballet and the world. She had never had such an important role and, as a consequence, she wasn’t aware of the darkness that surrounded her. In her night out with Lily, we see that Nina doesn’t know anything about nightlife and drugs. Having never been exposed to these situations and having always been under her mother’s projection, Nina is unable to control herself. She’s incapable of deciding for herself or knowing what’s best for her.

On the other hand, within the company itself, we see that her relationships there aren’t entirely healthy either. The dancers are replaced when they reach a certain age. There’s always rivalry between the dancers when it comes to a new role. In addition, the most powerful men, such as the company’s director, can abuse and pressure the dancers. This is something that reminds us of the Me Too movement that’s taking place in the world of cinema today.

Nina’s character is also quite similar to Norman Bates, the protagonist of Psychosis, especially due to her relationship with her mother. The overprotection and darkness of the entertainment world lead Nina to imbalance, instability, and self-destruction.

Black Swan is a reflection of psychosis right smack in the world of ballet. It’s a dangerous search for perfection, that perfection that we admire as spectators. We’re amazed as an audience when we see a work of art, but we’re completely unaware of the path the artists have taken to get to where they are. The result is perfection, but the road was most likely full of thorns.

Psychosis: What Is It, What Causes It, And How Do You Treat It?
We can define psychosis broadly as: "a mental disorder in which mental functioning is sufficiently impaired as to interfere grossly with the patients capacity to meet the ordinary demands of life." Read more »
Link copied!
Interesting Articles
Culture
17 Things Kids Said That Will Make You Smile

Sobekneferu, meaning "the beauty of Sobek", is the first female pharaoh. As you would expect, Sobekneferu's life was filled with…

Many people say that “there’s nothing like being young.” You soak in the sun without worrying about sunscreen, first kisses bring…