Biorhythm theory became notorious in the 20th century and is still applied in many areas. 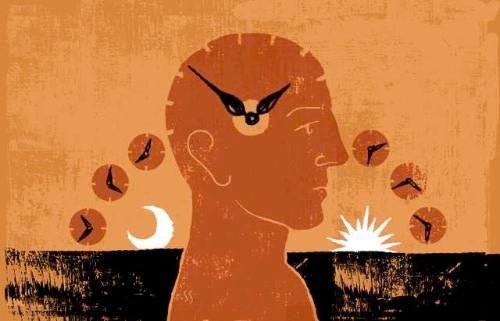 According to biorhythm theory, people have three types of biological cycles:

These cycles are present from the moment of birth. Biorhythm theory indicates that such cycles have an ascending and descending curve. At the top of the curve, the physical, emotional, and intellectual capacity are at their peaks.

Meanwhile, at the lowest points, each capacity decreases to a minimum. When two or more of those low points coincide on the same date, that day is considered “critical”.

This theory was created by Wilhelm Fliess, Alfred Teltscher, and Hermann Swoboda.

Wilhelm Fliess was a German doctor and Sigmund Freud’s patient and personal friend. Furthermore, he was the first to mention that he had observed regularities in certain intervals, speaking of them as an internal biological clock.

Fliess described the physical and emotional cycle. Also, he remained close to Freud and they created strange theories together. Among them, a rare association between the genitals and the nose.

Alfred Teltscher was an Austrian researcher and mechanical engineering professor at the University of Innsbruck. He was interested in Fliess’ theories and decided to prove them with his students. He ended up corroborating them and also added a new cycle: the intellectual cycle.

Hermann Swoboda was an Austrian psychologist and professor at the University of Vienna. He studied biorhythms for several years and, like Telscher, believed he identified defined intellectual cycles in his students. He shaped biorhythm theory as we know it.

In the 70s, a man named Bernard Gittelson published several books on the subject. At that time, the postulates of the New Age were quite popular. However, the public was very receptive to biorhythm theory.

In the USA, biorhythm computer programs were made. The business world also succumbed to the trend. In fact, United Airlines used biorhythms in order to avoid human errors during their flights. Similarly, thousands of companies joined the wave because Gittelson’s books gave guidelines to improve labor productivity based on biorhythms.

Although biorhythm theory wasn’t well-received in the science world, it wasn’t until 1998 when neurologist Terence Hines conducted a long-term study on the subject. He concluded that biorhythms didn’t exist.

Hines denounced that the observations and theorizations on which biorhythm theory were built on were completely arbitrary. The scientific method wasn’t used and conclusions were reached based on incomplete information.

Hines also proved that the physical, emotional, and intellectual cycles don’t exist. Yes, human beings have physiological and hormonal cycles. However, they have nothing to do with productivity, critical days, or anything of the sort.

Despite this, many people in the world still believe in biorhythms.

Enjoy Life More By Getting in Sync with Your Biological Clock
You've probably heard that each person has their own biological clock. While some work better during the day, others are more active and energetic at night. Read more »
Link copied!
Interesting Articles
Stories and Reflections
Viktor Frankl's Teachings on Resilience

Culture
The Importance of Training Ourselves to Persevere