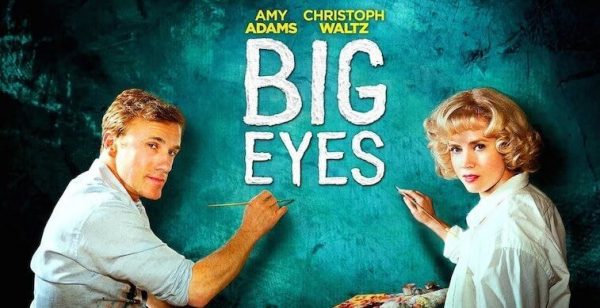 Big Eyes (2014) is probably the least “Burton-ish” Tim Burton movie. It’s actually hard to find his unique style in the movie. In fact, it’s nothing like what Burton normally produces because it’s based on real events. We’re talking about a film that’s totally lacking Burton’s signature style.

Margaret Keane’s story seems to fit well with Tim Burton, as he greatly admires painters’ works. The problem is that as the movie moves along we no longer see Burton. We start to see something else. At this point it’s worth asking if this is a problem. It was a problem for many Burton fans who were impatiently awaiting a movie with his signature style and peculiar aesthetics. The movie was also problematic for those who expected to find a new Ed Wood.

“The painting says ‘Keane’; I am Keane, you are Keane. From now on we’re one.”

However, we can still take certain parts from this film. Let’s stop thinking about Burton and focus on the film itself. For those who aren’t faithful Burton films, this article can be a great discovery.

We don’t see many women throughout history who have excelled in the artistic world. It doesn’t matter if we’re talking about literature, philosophy, cinema, painting, or sculpture. There are few female names that come to mind.

Women have been relegated to the background. Patriarchal society has hidden women and few have had an easy path in a world of men. It’s not that women write less, are less apt for painting or are not good in philosophy, it’s that they’ve remained in the shade.

“Nobody buys paintings painted by women.”

Many women have been forced to use masculine pseudonyms to publish a work. For example, the famous author who wrote the Harry Potter series used the initials J.K. Rowling instead of her name Joanne. She did this to hide the fact that she’s a woman and to allow herself some ambiguity.

The story that Burton presents in Big Eyes is the real story of Margaret Keane, an American painter who had to fight for the authorship of her work. Margaret signed her peculiar pictures as Keane, surname of her husband Walter. This is why the public thought that he created those paintings.

Walter Keane was in charge of selling the paintings. He managed his wife’s business, becoming the self-proclaimed author of these works. In this film we see Walter, played by Christoph Waltz, as a manipulator. He’s a kind of seducer with a very dark side.

Margaret, played by an outstanding Amy Adams, has already married once. As a result of that marriage she had her daughter Jane. In the 50’s and 60’s, it was quite important for women to have a husband and a stable family. Society would have looked down on her for being divorced.

Finding a husband with already having a daughter wasn’t an easy task. Therefore, Margaret is fooled by the “charming” Waste Keane. Margaret is a woman of her time, innocent and submissive with great artistic talent.

At first, Margaret succumbs to Walter’s charms. She’s happy to see that her work is desired and is financially lucrative. However, little by little she becomes disenchanted. She begins to see Walter for the manipulator that he really is. In the end, this leads to rocky terrain including the news media and going to court.

“I’ve never acted with freedom. I was a daughter, then a wife and then a mother. All my paintings are inspired by Jane because she’s the only thing I know.”

Big Eyes, the awakening of women

Margaret wakes up from her fairytale and begins her fight against Walter. This takes her into a period of constant tension in order to recover the ownership of her paintings. After years of struggle she manages to win the trial and show that she’s the true author of those “big eyes”.

The world lived in the shadows for many years. All of Keane’s buyers couldn’t believe that it was his wife who painted the paintings. Margaret’s inability to take ownership over her own paintings led her to be stuck in a cage of her own making.

“You had a Christian education. You know what they teach us: man is the head of the household. Maybe I should trust your judgement.”

Finally, exhausted by this situation, she divorces Walter and manages to take ownership of her own work. She had no idea of how difficult the process was going to be when she first married Walter, nor did she realize that her self-esteem was decreasing.

At this time the women’s revolution was only emerging. It was only the tip of the iceberg of everything that would come later. In a time when this mentality was subject to patriarchy, Margaret wasn’t able to restrain her manipulative husband. Therefore, the fight lasted for years.

Margaret Keane’s struggle is a struggle that all women who try to enter the art world experience. For her it was an awakening, a rebirth. Burton presents a film that brings us closer to a near reality. Margaret’s struggle was also a fight against machismo as the rest of society began to fight against it as well.

“I think you see things in your eyes. The eyes are the window to the soul.”

Margaret’s paintings were characterized by the expressive, large eyes she painted. The paintings became increasingly sad, like Margaret herself.

The paintings seemed to show children who emerged from a war. They were eyes that reflect the depths of the soul, of human feelings. They’re overwhelming paintings, but they’re not the type that would be exhibited in a museum. For many, they would consider the paintings to border on kitschy.

Margaret Keane has famous and peculiar followers such as Burton, Alaska, Joan Crawford (she had a portrait of herself painted by Margaret), and Marilyn Manson.

The truth is that many people collect Keane’s work. However she’s always been considered to be an outsider, a painter to kitsch to achieve ranks in high art culture.

Susan Sontag talked about this in Notes about the camp. The truth is she wasn’t wrong when she said that “the banal, with the passage of time, can become fantastic.” This is what Burton wanted to convey in this movie. To depict an artist who suffered, fought for her work, and deserved recognition.

“I just wanted the world to know that these were my paintings.”

10 Animal Movies to Help you Think about how we Treat them
Animal abuse has to go out if we want a more peaceful society. We usually treat them as tools or objects, but there are also animal movies out there that show us a different side of things. Read more »
Link copied!
Interesting Articles
Art and Psychology
Interior Design Psychology and How to Apply It

Art and Psychology
Giotto di Bondone, An Encounter Between Art and Faith

Giotto di Bondone was born between 1266 and 1276, in Vespignano, near Florence, Italy. He was a rather influential 13th-century…

Art and Psychology
The Psychology of Art: Concepts and Characteristics