Being Paralyzed by Fear: Why it Happens

Have you ever been paralyzed by fear? We tend to believe that, logically, we should react and move fast when faced with serious danger. However, the opposite happens and we realize, to our great frustration, that on many occasions we can't move a single muscle and are quite unable to defend ourselves. 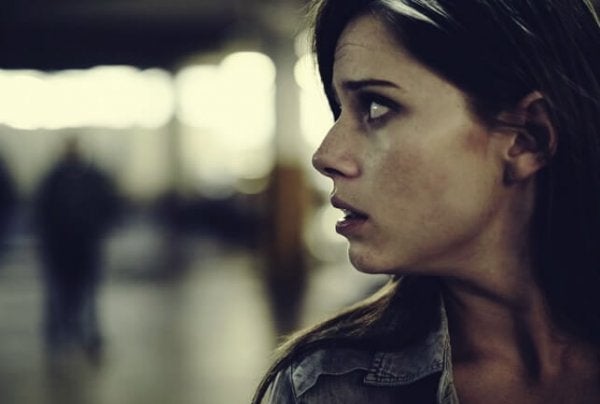 Today, we’ll talk about why we’re paralyzed by fear instead of actively reacting to certain stressful situations. Why do our muscles shut down, keeping us from moving, when the logical thing instead would be to either fight or flight?

We may notice how our pets react when they’re feeling threatened or when they’re caught doing something naughty. They stand still, paralyzed. This mainly happens when animals are small and it’s, in fact, a survival mechanism.

The good old “play dead” strategy is an evolutionary trait that we acquired in order to trick our aggressors. Most acts of aggression are rooted in the insecurity that leads to self-defense, and almost nobody feels threatened by dead beings.

Thus, if we’re dead, then we’re no longer a threat and the aggressor moves on (unless they’re hungry, in which case…). In spite of the fact that humans are very different from the rest of the animal kingdom and are “civilized,” this self-defense/survival dance also exists in our reptilian brain.

The amygdala is one of two almond-shaped clusters of nuclei located within the temporal lobes of the brain. It plays a very important role in our emotional system and is also in charge of notifying us when we’re in danger.

It doesn’t matter if the threat is internal (such as a heart attack) or external (someone has an aggressive attitude towards us). In both situations, the amygdala would activate immediately.

The amygdala sends nerve impulses to different areas of the brain in order to activate certain bodily functions. Thus, our heart rate will increase, more oxygen will reach our muscles, and we’ll be prepared to react and defend ourselves against the possible threat by either fleeing or fighting.

The amygdala triggers an immediate reaction, meaning it sends hormones to the bloodstream to prepare it for action. Our senses sharpen, we start breathing faster, and we’re more alert.

Adrenaline manifests in the middle of all of this. It actively participates in that response and the old dilemma to flee or to fight, contracting our blood vessels and dilating our airways. At the same time, it inhibits many areas, specifically those in charge of making decisions.

Why can’t we react fast in a dangerous situation? Well, this is all a consequence of the stress that triggers the alarms within our body and leads our nervous system to act in an instinctive way to save our lives. In this kind of situation, reasoning is an inconvenience because our brain’s priority is to react as quickly as possible.

Why are we paralyzed by fear?

Taking all of the above into account, what we perceive as an incapacity is, in fact, a defense mechanism.

We have to take into account the situation we’re confronting in order to understand why we freeze up. If a certain situation triggers a traumatic memory from the past or if it’s so severe that it leads us to a state of panic, then a complete disconnection occurs in our brain to protect ourselves.

This disconnection has a lot to do with what we know as depersonalization or detachment, one of the symptoms of anxiety. Suddenly, we feel like strangers in our own body. In addition, our senses and emotions numb down and we find ourselves completely disoriented and moving mechanically.

This is a survival mechanism that helps us reduce the emotional pain that a stressful situation may cause. In such situations, we don’t run away nor react. Instead, we do nothing.

Dissociation is a mechanism that our brain sets in motion to protect us from a situation we feel there’s no way out of. To do so, the brain simply “disconnects” our mind from our reality with the purpose of reducing the emotional impact that a stressing situation may have on us.

This type of reaction to a threat is common in abused children or in people who are victims of chronic aggression. In fact, dissociation can generate doubts about what happened and even make people believe that they imagined it.

In conclusion, this inability to defend ourselves against a threat is a completely normal reaction. Depending on the situation we’re facing, we’ll either react or stand still, paralyzed by fear.

The Body Language of Fear
The body language of fear manifests in facial microexpressions. Slightly raised eyebrows and a half-open mouth are signs that someone us scared. Read more »
Link copied!
Interesting Articles
Culture
Abusive Children: A Phenomenon on the Rise

Psychology Today
The Projects and Dreams the Pandemic Took Away: How to Face the Future