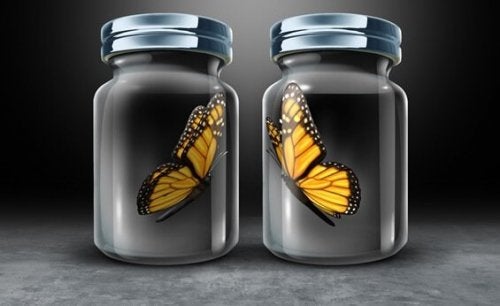 Balance is part of the basis of most of our relationships. On the other hand, we all know that complete balance is impossible. It’s never possible to achieve a perfect balance between what people give and receive. When it comes to us to decide, usually the person that receives the most is who deserves or needs it the most. However, when there’s a clear asymmetrical reciprocity in a relationship, this generally leads to the deterioration of that relationship.

We all know one or more people who give everything to others, who share everything they have. It can sometimes be difficult to respond in the same way. It’s also true that it’s impossible to establish a complete balance of what each person brings to the relationship.  A total balance isn’t even desirable. This would make the relationship based more on calculations than spontaneity.

On the other hand, the concept of “giving” is very broad. It means giving the other person a material or spiritual thing. These can include: affection, time, listening, etc. If this is asymmetrical reciprocity in a relationship or friendship, what usually ends up happening is that one party feels comfortable receiving and doesn’t make any effort to give back. This attitude can damage a relationship.

“Allowing injustice means opening the way for all those who follow.”

The causes of asymmetrical reciprocity

It’s worth asking ourselves why sometimes relationships allow asymmetrical reciprocity to occur. The most common cause of this phenomenon is the result of two types of situations. In both situations, there’s an idea that one person in the relationship has greater capacity than or a greater duty to the other person.

The first situation occurs when a person has some kind of special strength. For example, maybe they have better problem-solving skills or they’re more knowledgeable than the other person. Or perhaps they’re simply stronger emotionally than those around them. The other person in the friendship wants this person to solve problems or help them through situations, without any compensation for their contribution.

This type of situation sometimes extends to the government. Yes, we’re talking about welfare. This is based on the idea that a person who has some type of vulnerability doesn’t have to match what the other gives them. Although some situations justify this asymmetrical reciprocity, this only applies for very specific circumstances and usually only on a temporary basis.

When the most vulnerable person is forced to give

The second situation in which asymmetrical reciprocity occurs is opposite to the previous one. It happens when one of the parties is stripped of their dignity. There’s an idea that they’re required to give everything they have in exchange for very little because, in one way or another, their needs are less important than the needs of others.

This is what has happened throughout history with enslaved people. People have forged ideas that some people have no rights because of their skin color or because they belong to a certain culture. In these cases, the subject of persecution must give everything they can, without expecting anything in return.

This also happens in many relationships, particularly in family relationships or couples. There’s an idea that the most fragile or vulnerable party has more obligations than the other person or people. For example, the person who didn’t study a profession should serve the people who did or the most insecure person needs to submit to others in order to get their acceptance.

The effects of asymmetrical reciprocity

Although there’s always some asymmetrical reciprocity in human relationships, when this reciprocity is disproportionate it generates very harmful effects for those involved. What it does, in the end, is create unfair and unhealthy conditions. It’s unfair because one person ends up being the other’s instrument. It’s unhealthy because that lack of reciprocity is a form of violence, which also breeds violence.

In all cases, the person who’s forced to give without receiving is being exploited. The relationship can be relatively stable for some time, but sooner rather than later it will generate a growing dissatisfaction.  This often ends up breaking the false equilibrium.

For those who dominate, in any case, asymmetrical reciprocity doesn’t contribute much either. You have the power and can rely on other people, but this also degrades your work and can sometimes make you feel useless. It puts you in a state of need. It makes you reliant on the other person. What would happen to the master without his slave? What’s left of the dominant party when they no longer have their weaker partner?

Giving and Receiving: The Principle Of Reciprocity
When you give something without expecting anything in return, it’s known as altruism. But, up until what point is it giving without receiving really fair? Read more »
Link copied!
Interesting Articles
Wellness
The Path of Life

"Wanderer there is no path, for it is made by walking..." These words perfectly describe what life is; the path of life. There is no real path, no certain path, each one of us…