Artemisia Gentileschi was a great artist who painted during the Baroque period. Learn all about her here! 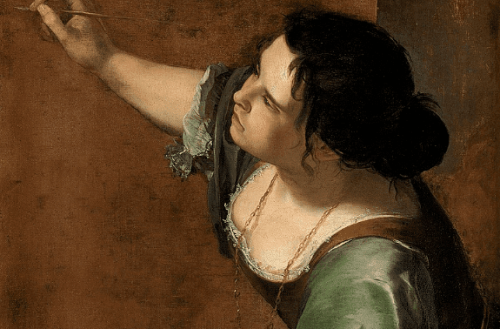 Artemisia Gentileschi was a Baroque painter from the 16th century. Like many female artists, her story and her work were hidden for many years.

Historians and collectors attributed Gentileschi’s work to male artists. Her life and work are a perfect illustration of 16th-century sexism.

Today, art historians recognize Gentileschi as one of the first Italian Baroque artists. Her paintings have the brushstrokes that were typical of the time, and the depth that she achieved in her portraits is unique. In this article, we’re going to learn more about this talented painter who deserves recognition.

Artemisia Gentileschi was born on July 8th, 1593, in an area of Rome, Italy known as the Papal States. She was a talented painter. Her mother, Prudentia Montone, died when she was 12. Her father was Orazio Gentileschi, a well-known painter.

Gentileschi showed an aptitude for painting early on and began to learn from her father. Her father was a friend of Caravaggio, and one of the first followers of the revolutionary Baroque painter. Caravaggio was a provocative and wild painter in the Rome art scene. Artemisia Gentileschi would later become an important defender of the second generation of his dramatic realism.

On one occasion, authorities accused Orazio and Caravaggio of painting defamatory graffiti about another painter on the streets of Rome. During the trial, Orazio told an anecdote about a time when Caravaggio visited his house to borrow some angel wings. Thanks to this information, we know that the great artist must have had a very close relationship with the Gentileschi family and that Artemisia, who was the oldest daughter, probably knew him.

Because Artemisia studied with her father and the landscape painter Agostino Tassi, it can be difficult to distinguish her work from theirs. At first, she painted in a rather romantic style, exactly like her father and Caravaggio.

Her first well-known work is called Susanna and the Elders (1610). For a long time, people believed it was one of her father’s paintings. She also painted two versions of a scene that Caravaggio had already painted called Judith Slaying Holofernes (c. 1612-13; c. 1620).

Abuse at the Hands of Another Artist

In 1611, Orazio was hired to paint the Palazzo Pallavicini-Rospigliosi in Rome, along with painter Agostino Tassi. In an effort to help 17-year old Artemisia perfect her technique, Orazio hired Tassi to assist her.

Since they were working together, Tassi and Gentileschi spent a fair amount of time alone. During one of the tutoring sessions, Tassi raped her. After the rape, Artemisia actually started a relationship with Tassi, believing that they would eventually get married. Tassi, however, refused to marry the young artist. Orazio then made a decision that was very unusual for the time: he decided to press charges against Tassi for raping his daughter. The trial lasted for seven months.

During the trial, many scandalous details about Tassi and his victim came to light. Artemisia had been a virgin before the rape, and there were even accusations that Tassi had murdered his wife.

As part of the legal procedures, Artemisia had to have a gynecological exam to show that she had lost her virginity when she was raped. She was also forced to testify while being tortured with thumbscrews, which was supposed to show whether or not she was telling the truth.

For an artist, this type of torture could have been completely debilitating. Fortunately, Artemisia avoided permanent damage to her fingers. Her passionate testimony, in which she said she could have killed Tassi after the rape, shows what a remarkable woman she was for her time.

Tassi was found guilty and exiled from Rome. However, the sentence was never carried out because the Pope offered Tassi protection due to his artistic abilities.

Many of Artemisia Gentileschi’s work after the rape show scenes of women being attacked by men or of powerful women seeking vengeance.

A month after the trial, Orazio made arrangements for Artemisia to marry artist Pierantonio Stiattesi. The couple then moved to Stiattesi’s native town of Florence.

In Florence, the Casa Buonarotti hired Artemisia for one of her first important commissions. The painter’s nephew had converted Michelangelo’s former home into a monument and museum.

In 1616, Artemisia became the first woman to join the Accademia delle arti del Disegno (Academy of the Arts of Drawing). That made it possible for her to buy her painting supplies without her husband’s permission and to sign her own contracts. The Grand Duke of Tuscany, Cosimo II of Medici, also offered her several lucrative commissions.

In Florence, Gentileschi started to develop her own distinct style. Unlike many other 17th century artists, she specialized in painting history instead of still lifes and portraits.

In 1618, Artemisia and her husband had a daughter and named her Prudentia after Artemisia’s deceased mother. Around that same time, Artemisia had a passionate romance with a Florentine noble named Francesco Maria di Niccolo Maringhi.

A series of letters that Francesco Solinas discovered in 2011 from Artemisia to Maringhi document the affair. Artemisia’s husband found out about the affair and used his wife’s love letters to get money from Maringhi.

As a result, Maringhi ended up being partly responsible for financially supporting them. The couple was constantly worried about money because Stiattesi was very bad at managing their finances.

“My illustrious lordship, I’ll show you what a woman can do.”

Back to Rome, Back to Caravaggio

Money problems, along with rumors about Artemisia’s affair, caused tension in the marriage. In 1621, Artemisia returned to Rome without her husband. Once there, she got involved in Caravaggio’s circle again and worked with several of his followers, including painter Simon Vouet.

She wasn’t as successful in Rome as she had hoped, so, she then spent some time in Venice, hoping for more commissions.

The colors that Gentileschi used in her paintings are brighter than her father’s, but she continued to use the tenebrism popularized by Caravaggio long after her father abandoned that style.

At the English Court: Later Works of Artemisia Gentileschi

Around 1630, Gentileschi moved to Naples. In 1638, she went to London, where she and her father worked for King Charles I. The duo collaborated on a painting for the ceiling of the Great Salon in his wife Queen Henrietta Maria’s house in Greenwich. After her father died in 1639, Gentileschi stayed in London for several more years.

While she was in London, she painted some of her most famous works, including Self-Portrait as the Allegory of a Painting (1638). According to her biographer Baldinucci (who annexed her life to her father’s biography), the artist painted many portraits and quickly surpassed her father’s fame.

Later, in 1640 or 1641, Gentileschi settled down in Naples. There, she painted several versions of the story of David and Bathsheba. Little else is known about the last years of her life. The last existing letter is from 1650 and implies that she was still actively working at the time.

The date of her death is uncertain. Some evidence suggests that she was still working in Naples as late as 1654. Some historians speculate that she could have died of the plague that devastated the city in 1656.

Gentileschi’s legacy has been controversial and complex. People respected her and recognized her while she was alive, but after she died historians completely left her out of their records.

That was partly because her style was very similar to her father’s and art historians wrongly attributed some of her paintings to Orazio. Roberto Longhi, a well-known Caravaggio scholar, rediscovered and defended her work at the beginning of the 20th century.

“As long as I live I will have control over my being.”

Unfortunately, academic and popular accounts of her life and her work have been exaggerated and sexualized. To some extent, this is because of a sensationalist novel about Artemisia that Longhi’s wife, Anna Banti, published in 1947.

In the 1970s and 1980s, feminist art historians such as Mary Garrard and Linda Nochlin finally vindicated Gentileschi. These historians focused on her important artistic achievements and her influence on the course of art history, rather than on her personal life.

Why the Word ‘Feminism’ Makes Young People Nervous
Even though there's been a great generational change, the word 'feminism' still makes young people nervous. Find out why in this article! Read more »
Link copied!
Interesting Articles
Stories and Reflections
The Hoyts, a Father and Son to Whom Everything Is Possible

Childbirth is probably the most dreaded phase of pregnancy, especially when it comes to first-time mothers. Fortunately, there are training…

Culture
Which Are the Most Resilient Countries?