Are You Just Keeping Up the Appearances in Your Relationship? 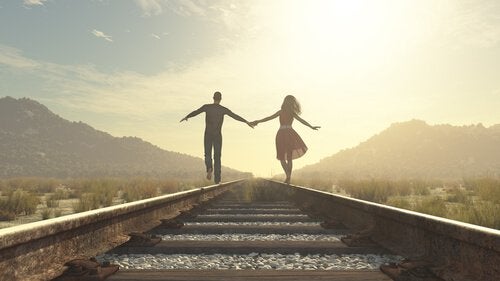 My concept of a relationship is not based around fitting in with social expectations. I know many people can’t stand the idea of not being able to tick the “married” box after having reached a certain age, but I refuse to let this question lower my expectations of what I want.

So often having a partner is seen as a triumph on the game board that has been created by the society we live in, with squares that you have to pass through in order to be seen as normal by everyone else. The pressure is sometimes so great that some prefer to reach the finishing line without having even thrown the dice. They want marital status to save them from the critics, that ultimate prize without having even sat down to play.

All options are respectable. Not being in a relationship sometimes means not knowing what to do when it gets to Saturday afternoon. On Friday night we are too tired to even think about it. Sometimes that is almost worse than the Sunday hangover after a pointless night of partying.

It is completely understandable that there are people who settle for having a partner without feeling any passion, mutual respect, or even affection. However, I prefer to join with those couples who are not just keeping up appearances, but rather those that really want to explore what it is to be together.

Keeping up the outward appearance, but inwardly wasting away

It is quite unlikely that one person will fall deeply in love several times in their life. There is no need to study chemistry, physics or statistics to understand this. We come to realise that a high percentage of the people we surround ourselves with don’t contribute too much to our lives; we choose more and more to spend time with our friends, and our intimacy is becoming an increasingly precious treasure.

This significantly reduces the chances that one person may be attracted to another. To be in good company is much more than saying we are with someone. At certain times of our lives we like to be able to say that we are not only in good company, but that the company actually counts for something.

To have or not to have a partner: luck and self-esteem

There are no rules or universal formulas for finding a partner who we really feel at home with. Studies in social and personality psychology usually generalize by saying that married people have a lower risk of suffering depression than single people, but they forget to point out that this happens when the couple is doing well. If you are in a relationship where you don’t feel good, your level of distress is much greater than if you are single.

On the other hand, it should be noted that men (not all of them, and fortunately fewer and fewer) feel happier married rather than single because even today the domestic task their mothers used to do are now being done by their partners. Many women have assimilated (not all of them, and fewer and fewer, fortunately) that, even if they work, they should still be carrying out the housework themselves.

What makes some people find what they really want is perhaps a combination of two ingredients: a little bit of luck together with good self-esteem. One usually goes hand in hand with the other. To continue having good self-esteem after several setbacks in relationships, and to get your head back above water again when luck hasn’t been on your side, is sometimes very complicated. It’s also important to share similar values for those relationships to work.

You start to attribute failures or defects to yourself that others may have projected on to you. To keep your self-esteem and not lower your expectations depends on finally finding the company you desire, that is if you really want to look for it.

No-one loses out giving love, the loser is the one who doesn’t know how to receive it. Nobody who gives love will lose out, because offering it with sincerity, passion and with sensitive affection dignifies us as people

We live in times where romantic love is being reviled and rejected. From some sectors of society, it is argued that people are emotionally independent and that the only thing we are really looking for is sex, and that this is our only real need. From this perspective anything else is just clutter. Personally, however, I’m starting to distance myself from these views and consider them with scepticism.

For many people being in love has transformed our lives. The fact it hasn’t finished in marriage or with children doesn’t classify it as a failure. It’s a learning , and above all, a living experience. We were with them because everything seemed to add up, even if we didn’t know how to accurately identify the figures.

Love is the art of implicit well-being, which quickens your steps and ignites your senses without you knowing even why.

Our mood became sweet, we felt a deep sense of calm, and at the same time an inspiring passion. The fact that there are people who can’t distinguish between romantic love and a dangerous love, or those that aren’t capable of loving, or those that simply generalize their bitterness and project it on to others, this doesn’t mean that their experiences can be generalized.

If nothing comes of it, then we live in hope. We also dream of romance. Let nothing take away from you. not even life’s worst blows, the desire to dream of what you always wanted. For me it wasn’t ticking the box of marital status just to fit in, anyone can do that.

For me it was always to have someone at my side to join together, so much so that making a commitment to the other person makes it a true exercise in freedom. It gives you wings to fly, horizons to strive towards and strength to get there. That’s what it means to join together.

Link copied!
Interesting Articles
Wellness
What Your Skin is Telling You

Wellness
The Small Touches in Life Make All the Difference

I consider myself a happy person with the life that I lead, especially since I have a wonderful group of people in my…

Affection is without a doubt one the best medicines. Haven't you ever felt worse after a doctor's visit than before you…

Wellness
Falling in Love Lasts an Instant, but Love is Forever

To love is to touch the infinite and, at the same time, to discover that our arms can never fully…

Wellness
How does the Brain React to the Absence of a Loved One?

The absence of a loved one is painful no matter who you are. Although love and loss is part of life,…