You Always End Up Attracting What You Want to Avoid 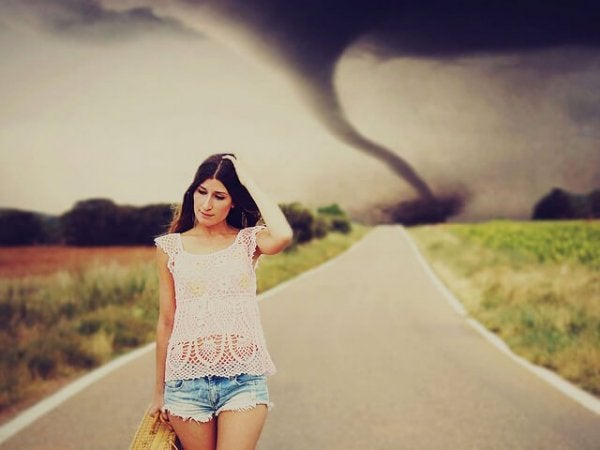 We spend a lot of time and energy trying to avoid certain things from happening that we don’t want to happen. Yet, why do we always end up doing the opposite? This is a very common problem. It’s possible that the solution to this problem can be found if we change our perspective and shift where we’re focusing our attention.

There are many situations in our lives that we try to control: work, studies, relationships, friendships, etc. We have an innate need for a certain illusion of control and to feel that everything is in order. To do this, we make an inventory of all of the possible dangers, believing that this way we’ll be able to intervene in order to protect ourselves from their possible consequences.

Reality is very different. These dangers we think of and which we even try to prepare for are a figment of our imagination that fills us with anxiety due to our anticipation of what might happen. We end up getting lost in all of the possibilities, which keeps us from valuing and taking advantage of what we’re living now.

“The prophecy of an event leads to the occurrence of said prophecy. The only condition is that one makes a prophecy of themselves and then considers it a self-existent fact. Independent from us or imminent. This way, that’s how you get exactly where you don’t want to go.”
–Paul Watzlawick-

Where should we focus our attention?

With our thoughts, in some way we are determining our behavior, habits and, ultimately, our destiny. That’s why it’s good to keep an eye on what we’re focusing our attention on. Unconsciously, we could easily latch onto suffering through the rumination of negative thoughts, especially those that turn into a cycle.

A good strategy to identify our “thought tendencies” consists in observing those thoughts so that we can in some way catch ourselves right in the middle of a self-destructive intellectual process. That way we’ll understand the issue that we can’t stop turning over and over in our heads. And we could ask ourselves what good does it do to continue thinking about it.

Doubting your own thoughts is essential when it comes to being able to modify them to our benefit. It is also important to not believe everything that goes through your head, allowing for the possibility of other perspectives that we’re simply not able to see at that point in time.

The focus of our attention has the power to focus all of our energy on a specific issue, losing the bigger picture. When we do this with something we dislike, our experience will revolve around it.

The brain doesn’t understand how to avoid

The brain is prepared to understand certain types of information through language and speech. Depending on what our brain understands, we’ll experience things one way or another. That’s why we could be communicating with ourselves in a very harmful way, without even realizing it.

Our brain associates thoughts with images, and “NO/NOT” isn’t integrated into these images. If you want to test this out for yourself, say to yourself “I will not think of a pink elephant”. Inevitably, you’re going to end up thinking about a pink elephant. This phenomenon that is produced in our mind is known in psychology as “Ironic process theory” (Wegner, 1994).

Wegner’s theory tells us that our attempts to control our internal experiences tend to fail, because we don’t really understand how they work. Therefore, we end up with the contrary or the opposite results of what we intended. That’s how we generate the opposite of what we were trying to control.

When we’re worried and upset over a certain issue, thinking that you don’t want to think about it over and over will only intensify your thoughts on the matter. The same thing happens when we send those messages to other people.

A strategy we can employ to avoid this common mistake is to change your perspective. Change your reference point and consciously orient your thoughts. You make the choice of where they can roam free. When you have recurring thoughts about an unpleasant issue, we can use the following techniques:

Trying to control what you want to avoid in life will only make you think about it more. In a sort of self-fulfilling prophecy, we will end up attracting it. Keep in mind that trying to suppress that thought is not only not a solution, it also helps it reappear over and over again. The smartest thing to do is to pay attention to what we want and focus on, instead of focusing on what we’re trying to avoid.

Adolescence tends to be quite a critical period, and it's common for there to be a dissociation between a person's…