A Buddhist Fable About Anxiety and Desire

This Buddhist fable about anxiety has a lot to tell us about the nature of desire. Discover it here! 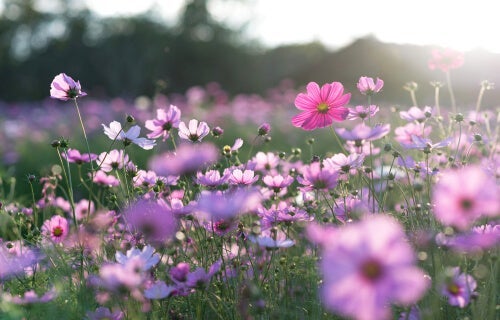 This Buddhist fable about anxiety and desire takes us to a distant land, where a very rich man lived. This man was devoted to searching for true beauty. His house was exquisitely decorated, built according to his own detailed instructions. Everything around him was incredibly valuable. Nevertheless, he couldn’t ignore an unmistakable feeling of emptiness, a hole in his life he could never seem to fill.

He thought long and hard about this. One day, upon looking out of his bedroom window, he realized that his lands stretched much farther than his eyes could see. Thus, he concluded that what he really needed was a garden. Flowers would fill his home with a heady aroma, and every color imaginable. Yes, this was what he’d been missing.

He ordered his servants to hire the best gardener in the land, no matter what they charged for their services. After a long and careful search, one man showed greater skill and knowledge than all the rest. The gardener was a wise and humble person, and the rich man didn’t hesitate to hire him. He was determined to have the most beautiful garden in the world.

The beautiful garden and the curious incident

The gardener began creating a beautiful garden. According to the Buddhist fable, it wasn’t long before he began to reap the benefits of his efforts. Within a few months, the rich man’s lands were filled with beautiful flowers, including roses, chrysanthemums, carnations, and tulips.

However, something strange began to happen soon after. In the mornings, they found that some parts of the garden had been crushed and trampled, as if someone had walked all over them. Some of the flowers had even been nibbled and gnawed, as had the fruits on the cherry trees.

The rich man was alarmed. He sent for the gardener at once and tasked him with finding the culprit and taking care of the matter once and for all.

The gardener carefully examined the plants that had been damaged. Whatever was happening only seemed to happen at night, so he decided to hide in a corner of the garden at night and wait. He waited for hours on end, but nothing happened. Finally, not long after midnight, he saw a deer approaching cautiously. It crushed the flowers beneath its hooves as it wove through the garden and made its way toward the cherry trees. It even nibbled on some of the flowers as it passed.

When he saw this, the gardener jumped out and tried to capture the deer. But the animal was quick and agile and, within seconds, it was already out of reach. Several days passed without any further damage to the garden. However, this reprieve proved to be short-lived. The gardener knew it’d be very difficult to catch the deer. It was cautious, shy, and incredibly agile. The only way to defeat it would be to force it to betray its own nature.

According to this Buddhist fable, the gardener began to hatch a plan. The only way to get the deer to betray its nature would be to unleash its desire and then its greed.

The moral of the Buddhist fable about anxiety and desire

The deer loved honey. When the gardener discovered this, they began to leave small crumbs of honey cake all around the garden. Soon, the deer began to go wild for the cakes. It entered the garden as soon as the sun went down, eager to eat all the foods the garden had to offer. Soon, it started coming in broad daylight, unable to resist the sweet honey treats.

Once he saw this, the gardener knew he’d won. One morning, he used the crumbs of honey cake to lay a path through the garden. As always, the deer soon appeared and began to follow the path. When it reached the end of the trail, a door slammed shut behind it. Without even realizing it, the deer had wandered into a cage and was instantly trapped.

The gardener told the rich man his story. He was amazed at his incredible wisdom. He noted that even the most reserved nature can be transformed when it acts purely on desire, especially if you feed that desire.

3 Beautiful Chinese Fables
Almost all Chinese fables, especially the oldest ones, are short stories with great lessons and an uncomparable charm. Read on! Read more »
Link copied!
Interesting Articles
Stories and Reflections
The Myth of Asclepius, God of Medicine