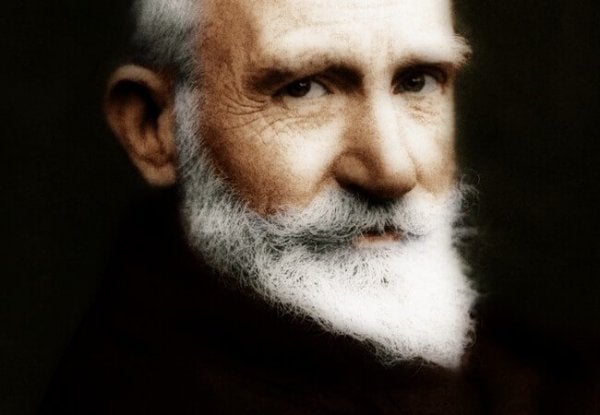 These George Bernard Shaw quotes are literary footprints of the great Irish writer and playwright who lived between the nineteenth and twentieth centuries. He understood the spirit of modernity as few did.

George Bernard Shaw was also a critic, commissioned by important newspapers in the United Kingdom to critique art. He stood out as one of the keenest observers of culture of that time.

“One man that has a mind and knows it can always beat ten men who haven’t and don’t.”

This important figure became famous mainly due to his plays. Like Oscar Wilde, he stood out for his interesting irony and his elegant sense of humor. George Bernard Shaw’s quotes are true works of wisdom. Here are seven of the best ones.

One of the recurring themes in George Bernard Shaw’s quotes is life. The next quote, for example, synthesizes his ideas about destiny, responsibility, and the meaning of life.

He made a solemn observation in another one of his quotes:

“Most people go their grave with their music inside them.”

It’s a reminder that we’re only in this world temporarily and that we shouldn’t take anything to our grave.

If you don’t want to do it, let others do it

This is one of the most interesting quotes by George Bernard Shaw:

“People who say it cannot be done, should not interrupt those who are doing it.”

This quote warns us to stay away from the ‘dream killers’, who often haunt those who dare to aspire and try to make their dreams come true. In other words, it means that if you aren’t doing something to achieve what you want, in the very least you should respect those who are.

How we get older

Aging is one of those unavoidable facts. Whether we like it or not, it’s a process everyone has to go through. However, we’re not always ready to face that reality.

Regarding this, one of George Bernard Shaw’s quotes reminds us what really represents old age:

So, by continuing to play, you’ll be eternally young.

Act and not react

All George Bernard Shaw’s quotes are witty and profound. However, there are some that are truly overwhelming. This is one of them:

“The possibilities are numerous once we decide to act and not react.”

With grace and charm, it simply tells us that we’re the subjects and not objects of life. The subject makes decisions and creates his reality. Objects only act by reacting to the events that others create.

The obstacle of fear

Fear is one of those monsters that grabs us, and, if we don’t fight back, never lets us go. Yes, there are many reasons to be afraid, but there are also reasons to face those fears and fight back.

This is what one of George Bernard Shaw’s quotes reminds us:

“In this world there is always danger for those who are afraid of it.”

It means that if we don’t fight against fear, it will feed itself and make us see the world as a dangerous place.

The two tragedies of life

Sometimes we think that the great tragedy of life is not getting what we want. However, there are many situations where we discover that this isn’t always the case. Our desires are not always reasonable, nor will reaching them always make us happier.

That’s what one of George Bernard Shaw’s quotes tells us:

“There are two tragedies in life. One is to lose your heart’s desire. The other is to gain it.”

When we achieve what we want, we often face that great void that nothing can fill.

George Bernard Shaw was, without a doubt, one of the most interesting writers in modern history. All his quotes help us reflect on life and the world. His sharp mind represents the best of universal thought.

Boldness Means Losing Balance (For a Moment)
Boldness always has a bit of optimism. To be bold is to become a part of a group of extraordinary individuals, who are able to create and progress. Read more »
Link copied!
Interesting Articles
Culture
7 Signs to Detect a Toxic Marriage

In July of 2015, UN member states reached a final agreement about the Sustainable Development Goals (SDGs). They committed to…

Culture
Doxing and the Threat of Revealing Personal Information

Doxing comes from the word documents. It's the combination of the abbreviation for documents (dox) and the suffix "ing". In this Internet era, very…