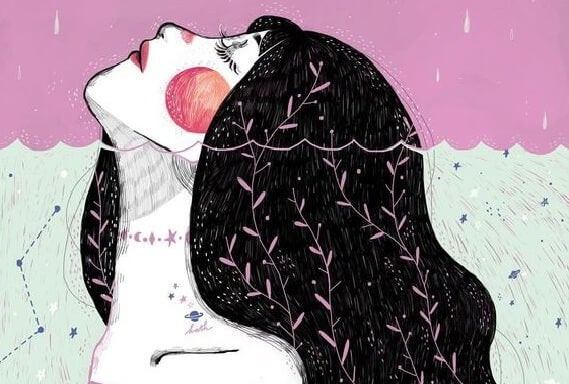 It’s not that there is a group of wise women and another group of dumb women. Every woman, and every human being really, holds within her the seed of wisdom. What happens is that some people listen to the noise of those lessons, while others prefer to turn a deaf ear to that noise.

Let’s place the adjective of “wise” to those women who have managed to overcome the prejudice and false beliefs that revolve around feminism. Keep in mind that many societies brag about having given women a greater role. However, we all know that it’s a process that still isn’t complete. One which still has a long way to go. Unfortunately, the truth is that women all over the world keep confronting realities of indolence and discrimination.

“At all times in my life, there has been a woman that took me by the hand in the shadows of a reality that women know better than men, shadows through which they are better oriented.”
-Gabriel García Márquez-

There are many virtues that define wise women. However, here we give due relevance to 5 of them. It’s all about complex traits, that are solely achieved when the mind and heart have undergone a process of healthy evolution. They are as follows.

Gender solidarity, a virtue of women that value themselves

Envy is a malignant flower that blooms easily in female terrain. Wise women are aware of this, because they have invested part of their lives to reflecting upon this reality. They also know that these disqualifications and the scathing criticism between women are solely a lag of a sense of inferiority.

Wise women understand that questioning other women doesn’t make them better. The complete opposite actually. That’s why they rejoice in the triumphs of their friends and avoid at all costs those insensitive conversations plagued with criticism.

Affectionate independence: acting out of conviction

Independence doesn’t consist of having money to spend. Nor is it about living self-sufficiently, as if you didn’t need anyone. It also doesn’t have anything to do with living by yourself or with doing away with relationships just because none seem important enough.

Independence is reflected above all in your ability to maintain your own convictions and be consistent with them. Above all, not caring about what others say or think about your actions. Wise women can connect with themselves and follow their desires. They understand that they’re different than the rest, but just as legitimate.

A distinctive trait of wisdom is a good sense of humor. Anyone who has lived enough knows that laughter is an excellent response to the vicissitudes and ironies of existence. Finally, most of the situations we experience simply have no remedy. That’s when laughter helps you accept the inevitable.

A sense of humor brings color to any particular moment. Women with wisdom understand that laughing is an act of freedom. That’s why they know how to do it. They aren’t seeking someone to entertain them. Instead, they have learned to find for themselves that playful state in any situation.

Realism, when you say goodbye to fairy tales

Almost all women have been educated to turn into eternal romantics. Oftentimes, even the most witty and educated ladies still hold within that sort of nostalgia for the existence of perfect loves and happy endings. Some renounce these romantic dreams with a certain type of bitterness.

But the women who have managed to become wise think and feel in a different way. Surely there was a moment in which they learned to say goodbye to these fantasies that only bring about frustrations. They understood that the dimension of being someone’s partner is simply another one life has to offer. It is not a magical revelation that changes everything forever. These women love their partners, just as they are. Wise women don’t make their significant others responsible for their own happiness. Paradoxically, they are happier like this.

Self-care, winning yourself over

There is a big difference between self-care and vanity. Self-care has to do with the protection of one’s own integrity. Of one’s personal well-being, of your health. Also, of course, it involves your appearance. It has to do with feeling good in your own way. That is to say, other people aren’t the ones that say how you should look, you’re the one who decides that.

Vanity, instead, seeks to please the eyes of everyone else. It is a trait of women that want to be judged with approving gestures by others. They need others to see them as beautiful. In order to achieve this, they are capable of anything, even going through great difficulties or putting their own lives at risk. Their concept of beauty is dictated by magazines, ads, stores, etc.

The traits that define wise women all have one element in common: self-love. It’s easy to say, but in order to build authentic self-esteem one must overcome many fantasies and prejudice. The effort is worth your while though, because the final prize is a much more free and fulfilled life.

Link copied!
Interesting Articles
Wellness
The Effects of Distrust in Our Relationships

Wellness
Five Habits of People who Hide Their Depression

Hidden depression is a condition when the sufferer doesn't manifest typical symptoms of depression, but instead other patterns and traits…

Wellness
You Wear me out: how to Protect yourself from Emotional Takers

Emotional takers are like black holes. They drain you with their demands and wear you out with their behavior. They can…

An estimated 0.5%-0.8% of the world's population has some form of rheumatoid arthritis, although many people also remain undiagnosed. In Spain,…