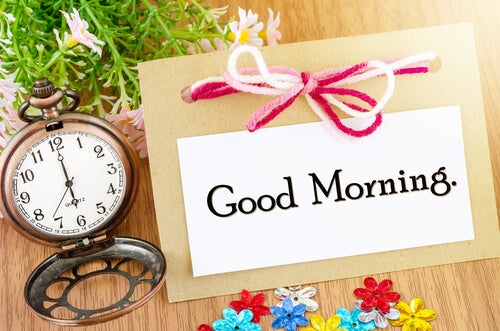 Throughout life, surely in both mine and yours, one hears a million times over the saying “the early bird gets the worm.” Encouraging us to wake up early, this phrase may be used in the attempt to educate, or to improve one’s professional life once they commit to their career.

“Don’t sleep to rest, sleep to dream, because dreams are dreamt to be fulfilled.”

Eghosa Aihie, a professional blogger, had the same idea, prompting him to prove the saying and the habit itself by carrying out an actual study on it.

The process of Aihie’s study consisted of waking up every day at 6 in the morning for two years.

The result? This habit changed his life.

The author outlines five things that sustained his motivation to get up earlier. I invite you to try it, see what happens, and let us know how it goes.

What are the five reasons to get up at 6 in the morning?

1. You will have more time to think about what you want

One day I realized that I was enabling myself to fall short of my own goals because I was never able to focus well enough. Having time to start the day in an organize, calm way, and knowing exactly what you need to invest your energy in throughout the day allows you to advance and to not block yourself by losing time or letting your mind wander.

Scientific studies have proved that the brain functions best in the first few hours of the morning. Take advantage of these hours in which you are much better at controlling your mind. Take advantage and build up some emotional strength for the later, more difficult part of your day.

2. You will have more time to organize your day

If you wake up early in the morning, you will have much more time to organize your work day in advance, before beginning anything and without any distraction. This will help you to be more effective and competent in what you set out to do each day.

Furthermore, if you plan out your day with a tired mind, you run the risk of overwhelming it and not being able to plan it in as efficiently as possible. The best thing to do is to rest well at night and then, the next day, with batteries charged, begin your planning calmly and with a fresh mind.

3. It’s the perfect time for exercise

Once you start waking up at 6 A.M. you no longer have the excuses to avoid the gym. Getting up that early will give you a couple extra hours to do whatever you want before beginning the work day.

In addition to this, when you exercise in the morning, the endorphins you create will be your greatest energy source throughout the day, allowing you to enjoy a day filled with positivity and happiness in anything you do.

4. Still don’t know what it means to have breakfast? Now you can find out

You have undoubtedly heard about the importance of the first meal of the day – breakfast – in your ability to enjoy a day filled with energy. With time to enjoy a healthful breakfast, you will be able to confront the loss of energy the body goes through over the course of a day.

One study done by the Johns Hopkins Bloomberg School of Public Health scientifically demonstrated and confirmed that if you take the time to have a slow and healthy breakfast, you will be supplying your body with a habit and routine that is highly beneficial to your health.

Remember that your body needs fuel to function optimally in the morning, and throughout the whole day.

5. It’s the secret of successful people

“He who wants to prosper must start to wake up early.”

Many people who have a lot of success both in their personal and professional lives get up before 6 in the morning.

Jack Dorsey, the founder of Twitter, confirmed in an interview with New York Magazine that he begins his days at 5:30 A.M. He also shared that he uses his mornings to do things like practice meditation and run a few miles.

The founder of Virgin Group, Richard Branson, said in an interview for Business Insider that he wakes up early, at 5:45 A.M. to take time to exercise and enjoy a healthy breakfast.

Getting up at 6 in the morning definitely allows you to be three steps ahead of everything else around you and to feel more calm and relaxed.

Giving yourself this extra time and carrying out your day in a calm but efficient way will benefit and bring out your greatest creative potential, and allow the greatest development of self-confidence.

All of this leads to the conclusion that an early wakeup time is the perfect ingredient for taking on the world. So, I will definitely begin to adopt this habit in my day to day life. Will you?

Culture
Myths and Facts about Ayahuasca

Culture
Have you heard of the mysterious "Mandela Effect"?

You feel like you've heard of something before... but could it be the Mandela Effect? This interesting phenomenon is a…