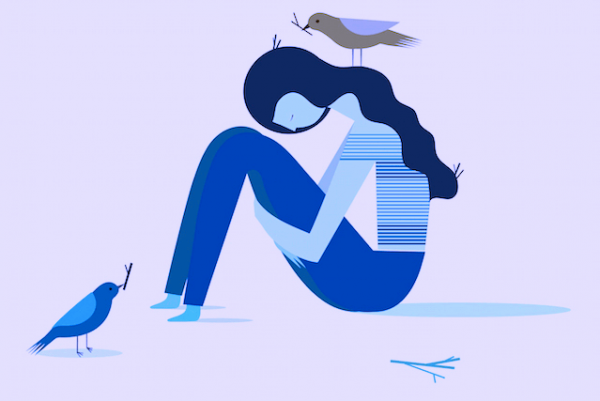 Depression is a multi-factorial condition. This means that its appearance and the impact it has on the life of the individual who suffers from it are influenced by many factors. That’s why, in order to fight depression, the best thing to do is to attack it from different sides…

Recently a lot of importance has been given to the chemical changes that take place within the brain and which are associated with depression. A lot has been said about hormones: of happiness, of stress, everything. Neurotransmitters and their effect on our mood have also been discussed. Now, although this approach is scientific and valid, it is also important to clear some things up about it.

“Depression is a prison in which you are the prisoner as well as the cruel warden.”
-Dorthy Rowe-

The chemistry of depression

Depression produces chemical changes within the brain and vice versa. However, the brain’s chemistry is ever-changing. The quality of our thoughts and the substances we consume are two of the agents capable of modifying the chemistry of our brain. In the case of depression, they increase or decrease the amount of serotonin available.

The production of serotonin starts in the intestine. From there, the precursor of this hormone is produced, which is called “Tryptophan”. That’s why some call the intestine our “second brain”. That’s why the type of food we eat is so important, as well as the type of lifestyle we maintain. Thus, in order to produce more serotonin, which will aid in fighting depression, there are some completely natural methods. These are just 5 of them.

Let’s start off by saying that there are some foods which inhibit the production of serotonin. Thus, these foods increase the risk of depression. These foods are basically carbohydrates and foods high in sugar. This type of food is like an energetic discharge within our body. They are metabolized quickly and generate avidity. In other words, they generate a form of withdrawal syndrome.

On the other hand, other foods such as whole grains, fruits, and vegetables contribute to putting more tryptophan into the bloodstream. This translates into a bigger production of serotonin. Therefore, these foods act as protecting agents against depression. Recent medical studies have attributed turmeric with a special tendency of producing this effect.

The most appropriate type of exercise

Any type of exercise raises the levels of serotonin within the brain. However, the effect is much more significant when the exercise is combined with specific situations. The ideal thing is for it to develop in a scenario which eases the mind. An environment which lowers one’s levels of anguish.

Physical exercise is much more productive if it is performed outdoors. The trees and the green of nature boost the positive effect of the exercise itself. A simple walk, at a brisk pace and through the woods, can have extraordinary effects. The sea is another scenario with healing properties.

Our thoughts have an enormous power over our mood. It has been proven, for example, that the placebo effect is very high in people suffering from depression. In some experiments, people are told that they will be given a novel drug which is very effective on depression. Most people take it and feel better. That’s the effect of positive thinking.

Relaxation and medication techniques are also very advisable for people who feel depressed. Sometimes it’s enough to simply take a second to breathe, trying to empty your mind. It has also been proven that for religious people, repeating prayers increases their sensation of happiness

Literature allows us to come into contact with other people’s experiences, reflected in characters or in the narrator himself. This purifies our own emotions. The inspiring histories found in literature produce a sensation of well-being and contribute to the modification of our brain chemistry in a positive way. They equate positive thoughts.

Writing, on the other hand, has a special effect of catharsis. Joel Robertson, expert on the topic, recommends that everyone write for 20 minutes per day for 4 consecutive days. The writing topic should be painful experiences, and it is best to do it without thinking, almost automatically. This researcher assures that this experience provides a deep state of peace.

It has been proven that some melodies have the ability of increasing the production of serotonin. Harmonizing the brain and bringing about the sensation of well-being and enthusiasm. Bach’s music is one of the most recommended. This artist orchestrated compositions in a mathematical order which seems to coincide with some of the frequencies within our brain.

Either way, other composers are also recommended: Brahms, Chopin, Händel, Haydn and some operas like Madame Butterfly. Classical music inspires and induces a type of opening of one’s feelings. It helps you connect with your own pain, and this has a very healthy effect.

For a depressed individual, it’s not easy to perform actions in favor of their own well-being because their bodies are asking them to give up. Maybe it needs some extra motivation. Maybe it needs support in order to begin. However, the most difficult part is precisely that, the beginning. These methods to overcoming depression in a natural manner tend to be efficient in short-term. Whether you have depression or not, do you dare try them out in order to improve your mood and well-being?

Sándor Ferenczi is known in history as the "enfant terrible" of psychoanalysis. This man of science was born on July…