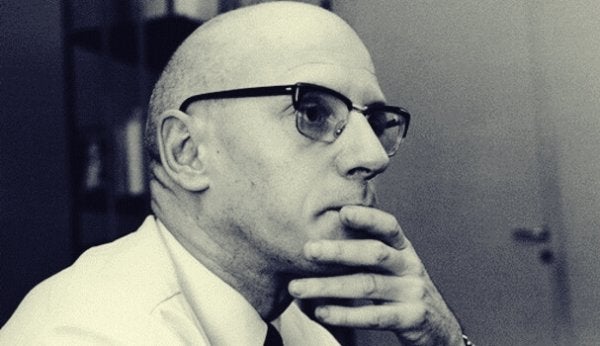 Almost all of Michel Foucault’s quotes are profound and disconcerting. This is to be expected if you take into account that he was a great French philosopher of the contemporary era. His thoughts marked a before and after in history.

Michel Foucault was born in Poitiers (France), in 1926. He became a philosopher in Paris and lived there until his death in 1984. He found the main inspiration for his reflections in Martin Heidegger and Friedrich Nietzsche. Also, he based his thoughts quite vividly on Sigmund Freud’s theories.

“I’m no prophet. My job is making windows where there were once walls.”
-Michel Foucault-

Foucault made himself known to the world with his work “Words and things.” However, later works, such as “Discipline and Punish”, “Madness and Civilization” and “History of Sexuality” were also very impressive. From these, we’ve extracted five interesting phrases that we want to share with you.

1. One of Michel Foucault’s quotes about knowledge and power

The relationship between knowledge and power is a topic that comes up a lot in Michel Foucault‘s quotes. This is one of his most emblematic quotes:

“The history of the struggle for power, and consequently the real conditions of its exercise and maintenance, is still almost totally hidden. Knowledge is not a part of this: that should not be known.”

What Foucault meant by this is that knowledge serves power. The main service it provides is to hide the form of how power is exercised, obtained, and sustained. As he says, “that should not be known”. This is why we talk about the great figures of power and their works, but little is mentioned about the actions, manipulations and, often, abuse that take place behind this.

2. The educational system, according to Foucault

The topic of the educational system appears in several quotes by Michel Foucault. For this French philosopher, this is a field that is closely related to power. He states:

“All systems of education are a political way of maintaining or modifying the adequacy of the speeches, with the knowledge and the powers they imply.”

Note that he does not speak of education in general, but of the educational system. There is a big difference between these two things. The educational system aims to subordinate the domain of speech, knowledge, and power to the systems in control. Its role, according to Foucault, is, in one way or another, to “domesticate” the individual so that it serves that system.

3. Morality, a form of power

Foucault denounces morality as another discourse of power that seeks to perpetuate the relationships of domination. In fact, it could be considered a form of power that is even more ferocious and implacable than the others. From morality, judgment is passed and sanctions are made. Rejection or exclusion are decided and applied, everything that is consistent with what fits its own parameters.

Hence, one of Michel Foucault’s quotes says, “You have to be a hero to face the morality of the times.” The morality of an era can end an individual. The examples abound in history. They prove that Foucault is right. In fact, many times throughout history, intolerance against what a society considers “immoral” has been taken to the extreme.

4. Prison and his analogies

For Foucault, there is an obvious analogy between two areas that seem very dissimilar to each other. In this regard, this impressive philosopher asks an interesting question.

“What is so astonishing about the fact that our prisons resemble our factories, schools, military bases, and hospitals- all of which in turn resemble prisons?”

Not only in this question, but in much of his work, Foucault proposes that there are three areas in which power is shown to be more naked than ever: prisons, hospitals, and barracks. In these three spaces, the human being is completely at the mercy of the authority exerted over them. However, the same is also true in other areas such as factories and classrooms. The only difference is that in these last two the manifestation is more subtle.

5. Power and its exercise

As you can see, many of these quotes by Michel Foucault seek to denounce the coordinates of contemporary power. These reflections show that domination is now exercised mainly from an ideological level, which includes morality, education, and some values or anti-values. This does not exclude the fact that power is also exerted over the body, not so much as physical punishment, but as ideological orders.

One quote by Michel Foucault which synthesizes his view of power is, “Power, in short, is exercised rather than possessed.” By this, he means that power is not defined by a position or simply a condition. What makes it powerful is its effective execution.

Michel Foucault is a great thinker who revolutionized the way the rest of the world sees reality. His contribution to mankind was incomparable. He managed to grasp very subtle logic that is present in everyday situations. Foucault’s philosophy is a discourse of freedom.

5 of the Best Quotes from Anna Freud
Anna Freud, daughter of famous psychologist Sigmund Freud, also had a lot to offer the world. Here are 5 of her most representative quotes. Read more »
Link copied!
Interesting Articles
Culture
Lenore Walker's Cycle of Abuse

Lenore Walker's theory, the cycle of abuse, states that there are four phases in all abusive relationships. This researcher and…

Culture
The Hero's Journey and the Archetypes of Migration

The creator of analytical psychology, Swiss psychiatrist Carl Jung, proposed that we can understand mythical narrations of journeys about new…