Many consider Socrates to be the father of philosophy. Discover some of his philosophies in this article. 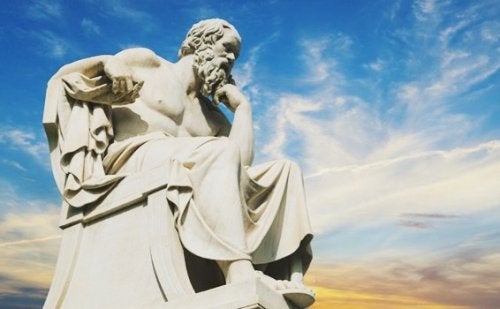 Many consider Socrates to be the father of philosophy. He was born in Athens in 469 B.C. His father, Sophroniscus, was a stonemason. His mother, Phaenarete, was a midwife. Despite his humble origins, Socrates’ life is full of lessons that are still valid today.

Fundamentally, this great philosopher lived as any other Athenian. He followed in his father’s footsteps for some time and had to serve as a soldier for the Greeks. In fact, people knew him to be a great worker and a very patient man.

When he became famous as a thinker and naturalist, he also began to make some enemies. This is due to the fact that he promoted an inflexible set of morals. Within this ethical system, there was no place for dishonesty, dishonor, or double standards. He was persecuted and ridiculed for these ideas. In the end, he was even condemned to commit suicide. This last episode of his life turned out to become a great life lesson.

1. Humility: One of the great lessons from Socrates’ life

Socrates wasn’t very good-looking. He was very short and had a prominent belly. Furthermore, he had rough facial features and was characterized by his large bulging eyes and extremely snubbed nose. The other philosophers mocked him due to his physical appearance.

Nevertheless, none of this affected the “father of philosophy”. On the contrary, he paid little to no attention to these criticisms. In fact, he would always wear the same cloak and lived a completely austere life. He barely ate and drank. One philosopher said that no slave would want to be treated as Socrates treated himself. Plato, on the other hand, would wash his feet and put his sandals on them.

2. Respect for other people’s individuality

One of the most interesting aspects of this philosopher’s life is that he never wrote anything down. Despite the fact that everyone thought he had an incredible mind, he taught orally.

He believed that everyone had to develop their own ideas. If he were to write his own ideas down, that would condition other people’s intellectual formation. Socrates had a more original teaching method. He would talk with people at length, displaying his knack for irony and his extraordinary capacity of seeing things from a different perspective.

Socrates would impart his teachings with subtlety and intelligence. Some people still use this teaching method, although perhaps not as much as we’d like. The Socratic method inspired some of history’s great pedagogues, such as Jean Piaget.

The philosopher would start a conversation by interrogating his interlocutor. He would ask them questions that would point to the conclusion that what they were saying was either consistent or poorly substantiated. Thus, everyone would arrive at the truth by themselves. Socrates would just listen and ask questions.

4- Opening up completely to the truth

Socrates said, “I know that I know nothing”. This wasn’t just a slogan or some way of bringing attention to himself. This philosopher was truly open-minded in a unique way. He simply considered that he didn’t know what the truth was. He asked questions before seeking answers and broadened the world’s perspective before trying to close in on something.

Socrates also said, “Know thyself”. Thus, he didn’t attempt to describe human beings. Instead, he invited all of us to explore ourselves – one of the most fascinating journeys a person can undertake.

Socrates also had an amazing sense of humor. This was reflected in his anecdotes about Xanthippe, his wife. She was 30 years younger than him and famous for her difficult personality. Someone once asked Socrates why he’d married her and he responded, “I like the fact that I get to learn from a person with such a bad temper. There’s no better school for learning to deal with other people than that”.

When he was condemned to death, his wife went to visit him and broke out in tears. Socrates then told her, “Don’t cry – we’re all condemned to death by nature”. His wife answered, “But you’ve been condemned unfairly”. Socrates rebutted, “Would you think this situation was less regrettable if they had condemned me fairly?”

Philosophy and Psychology
The Nuances of Atheism