In these quotes from Isaac Asimov, we discover a writer who combines the best of scientific thought with principles of humanism. 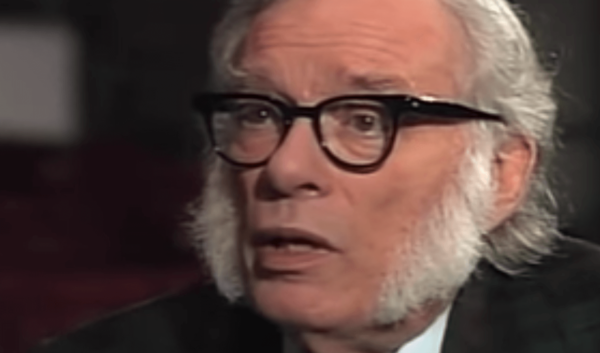 Many quotes from Isaac Asimov have to do with extolling the value of science and denouncing the effects of ignorance. This impressive writer was born in Russia but emigrated to the United States and became an American citizen. He was possibly one of the most important scientific educators of the 20th century. That’s why he was so emphatic about the value of reason.

Asimov was also one of the greatest science fiction writers. He had some impressive achievements as an author and proved that scientific thought doesn’t exclude the imagination. On the contrary, science is inspired by imagination. As a result, some of Asimov’s best quotes are about creativity.

Asimov declared himself an agnostic first and later became an atheist. Some of his writing directly questions religious beliefs. Some people find that kind of questioning difficult to digest, but his intention wasn’t to disrespect religion. Instead, he was trying to draw attention to its lack of consistency.

Without further ado, let’s take a look at some of the most interesting quotes from Isaac Asimov.

“Above all, never think you’re not good enough. Never think that. In life people will take you at your own reckoning.”

“Never let your sense of morals get in the way of doing what’s right.”

This quote could be surprising or questionable for some people. Here, Asimov contrasts a sense of morality with what’s actually right. Some people would say this is contradictory, especially if you look at it from a moralist perspective.

What Asimov is doing here, however, is proposing a deeply pragmatic idea. A sense of morality, after all, is a metaphysical reality. It belongs to the world of ideas. What’s right, on the other hand, lives in the world of common sense and what’s best for everyone, even if it contradicts a moral precept.

This is a beautiful quote that masterfully describes a reality we’re living today. Advances in science and technology move forward at lightning speed, but individual and social changes are either slow or completely stagnant.

A clear example of this idea is war. Many people still believe that war is the answer to resolve some kind of contradiction. Today, war is highly technological, that’s true. But promoting war as an answer to anything at all is a mindset that doesn’t differ much from that of our ancestors.

“Violence is the last refuge of the incompetent.”

This is one of Asimov’s most famous quotes and the one that people reference most often, and for good reason. Here, Isaac Asimov condenses a great truth in a few words. He’s speaking out against the true face of violent behavior.

He says that violence is the refuge of incompetent people because it corresponds to the most basic and instinctive answer to conflict. It only appears when other human abilities, such as communication skills, empathy, or creativity, fail to emerge.

“In life, unlike chess, the game continues after checkmate.”

In the human realm, the concept of something “ending” or being “final” is relative. However, it doesn’t actually exist as such. Even our lives don’t end when we die, because we continue to be present in the work that we leave behind, and in the hearts and minds of those who knew us.

Any ending, then, doesn’t equal an absolute termination. Instead, it’s an important change along a continuous line. This is human life. It’s a never-ending succession of beginnings and endings. No one, nothing, ever reaches absolute zero.

5. Science is a light

So far, science is the only human discourse that has two characteristics: it’s universal and accumulative. Universal because it has value independent of the culture in which it exists. And accumulative because scientists are constantly creating new knowledge on the foundations of previous results.

Neither religion nor philosophy have these characteristics. Consequently, Asimov believes that, when science illuminates one place, it shines everywhere. Scientific truth is the closest thing we have to absolute truth.

These quotes from Isaac Asimov are ingenious and inspiring. You’d expect no less from such a multi-faceted and curious thinker. You could say that Asimov made science into a fascinating story so that readers could comprehend why it’s the most important achievement of humanity.

7 Great Quotes from Hermann Hesse
Hermann Hesse's quotes are an invitation to reflect on life and the search for identity. They are a gift to all those who wish to know themselves better and discover who they really are. His great legacy, which is deeply spiritual and psychological legacy, is well worth reading. Read more »

Link copied!
Interesting Articles
Literature and Psychology
Reading as a Source of Emotional Processing in Children

Literature and Psychology
The Six Blind Sages and the Elephant: Learning to Value Other People's Opinions

It's not always easy to value other people's opinions. This is because, when they're completely different from our own, we…