One of the most common everyday mistakes our brain makes is to think that all the information that matches what we previously thought is more likely to be true. This bias, and others like it, prevent us from being objective in our judgments about reality. 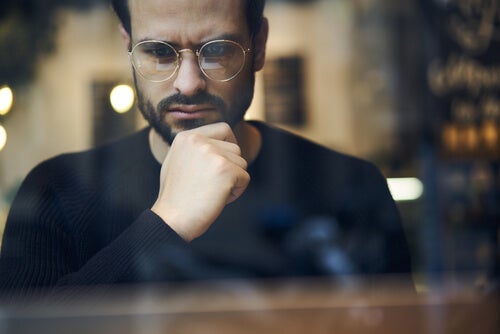 Our brain makes several everyday mistakes, which go unnoticed by most of us. They’re called cognitive biases and are caused by inaccurate processing of information regarding reality.

The reason for these everyday mistakes is that humans need to respond quickly to the stimuli they receive. For that reason, the brain does what it can to interpret the information it receives. However, that path doesn’t always lead to a valid conclusion.

What we do is put a kind of filter between the information and its interpretation. We make it easy for ourselves, albeit inaccurate from the point of view of reason. It’s not voluntary, it’s automatic.

Below, we’ll share the five everyday mistakes our brain makes.

“Perhaps it is the very simplicity of the thing which puts you at fault.”

1. Validating ideas that are similar to ours

This is one of the most common everyday mistakes the brain makes. The technical name is confirmation bias and it’s related to the fact that, without realizing it, we tend to filter the information in a way that confirms what we previously thought or felt.

In other words, we think that anything that confirms what we previously thought or felt is true, and our attention is selective about it. If any data or information appears to contradict it, then we automatically tend to reject it. We usually label it as “false” without a thorough evaluation.

According to logic, everything that has no solution or that’s irremediable should be removed from our list of things to worry about when we accept it. Why spend time and energy worrying about it if it’s impossible to solve or change? However, human beings aren’t usually guided by such simple logic.

Often, our mind is concerned with, and worried about, impossible things. We tend to attach a lot of importance to them because that’s part of our evolutionary make-up. Things that are hopeless, or that we can’t achieve, grab our attention more because we assume that they’re things we have to protect ourselves from.

Of course, it’s always a mistake to make unnecessary compulsive purchases. However, from the point of view of the mistakes the brain makes, what’s important isn’t the purchase itself but the whole mental process that we carry out after making it. It’s a kind of emotional hangover that leads us to build up a cognitive bias.

Many people feel guilty after spending money on something they don’t need. To avoid this unpleasant feeling, they spend a significant amount of time developing a whole list of reasons that support the idea that the unnecessary purchase is, in fact, necessary. The goal here is to convince ourselves of this need and, thus, eliminate remorse.

4. Comparing the incomparable, one of the brain’s daily mistakes

This is one of those everyday mistakes our brain makes that advertisers know all about and use well. Suppose you see a label comparing two prices. Something like “Was $100, now $79”.

It immediately catches your attention and you process it as a very favorable opportunity that’s being presented to you. Given this mental slip in logic, you’re more likely to end up buying it. After all, who likes to pass up a great opportunity?

The point is that we rarely take the trouble to corroborate the information. Did it really cost $100 before today’s reduction? In these cases, our brains simply get carried away by the assessment they make of a favorable comparison. Such a comparison leads to decisions that are rewarding, even if they’re based on something that isn’t really true.

5. Believing totally the opposite to reassure ourselves

According to several studies conducted by the late Eduard Punset, who was Professor of Science, Technology, and Society at the Ramon Llull University, the brain tends to change our perception of reality when that reality torments us in a significant way. What’s striking here is that it often leads us to believe totally the opposite, in order to avert the anxiety that a certain situation can awaken in us.

The most classic example of this is the denial of death. Many people are unable to tolerate the idea of disappearing forever. That’s why, regardless of a person’s religious beliefs, they’re convinced that life extends beyond death. Although there’s no evidence to support this, they refuse to think otherwise.

These are just a few examples of the everyday mistakes our brains make, as there are many more. Although our mind has an infinite capacity, it also tends to take shortcuts to simplify things and to nimbly build a response to reality. It wouldn’t be a bad idea if, from time to time, we evaluated just how objective our perceptions are.

Your Brain Has an Autopilot Mode: The Default Mode Network
It's disconcerting to think that your brain has a life independent of your conscious mind? Unsettling or not, it's true. This is the default mode network. Read more »
Link copied!
Interesting Articles
Brain
What Happens to Your Brain Before You Die

Brain
Out-of-Body Experiences - What Are They?

Out-of-body experiences encompass several phenomena that are as fantastic as they're complex. Imagine yourself floating out of your body; this…