Arthur Miller was a sharp critic of the consumerist and success-centered lifestyle that prevailed in the United States in his time. However, he went further than this. He also reflected on the meaning of life and creation. 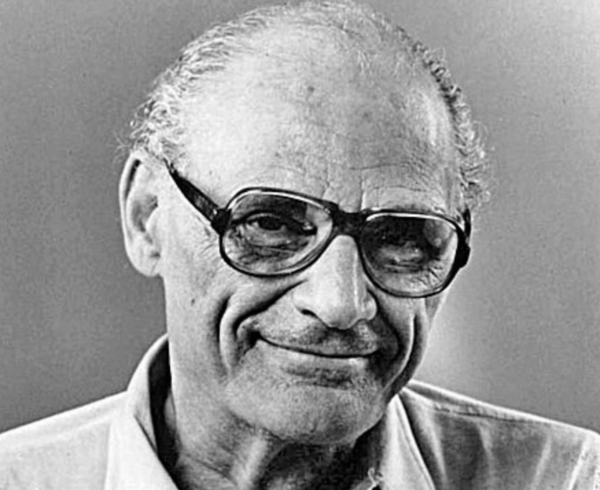 Arthur Miller left us many quotes that have gone down in history. They come from his works, the interviews he gave, and random notes he left scattered around where he worked. This wonderful American playwright wrote about universal themes, such as the meaning of life, love, and power.

Arthur Miller was, above all, a great critic of his society. His most famous play, The Death of a Salesman, is a sharp indictment of the falsity of the “American Dream”. In The Crucible, he showed the extent to which society is capable of committing injustice, based on prejudice and supported by the majority.

Arthur Miller was also a politically persecuted man. His ideas put him in the spotlight of the more conservative sectors. Rather than proposing a new political system, he advocated for the humanization of the existing one. His thoughts and ideological stance were reflected in many of his quotes. We’ll share a few of them below.

“The apple can’t be stuck back on the Tree of Knowledge; once we begin to see, we’re doomed and challenged to seek the strength to see more, not less.”

1. A quote about character

“A character is defined by the kinds of challenges he can’t walk away from. And by those he’s walked away from that cause him remorse.”

This is one of Arthur Miller’s most interesting quotes. When he talks about character, he refers to the particular way a given person thinks and feels. He points out that the problems and challenges define the person in this regard.

“Life is like a nut; it can’t crack between feather cushions.”

This statement refers to the search for the essence and true meaning of life. This, like many other Arthur Miller quotes, uses a strong metaphor. It basically points out that the blows that life deals us are revealing.

When he speaks of “feather cushions”, he’s referring to favorable circumstances. These may be more comfortable for us but they don’t serve any purpose in revealing the true essence of things. The greatest learning takes place in the midst of hard situations. Life’s hard times have the virtue of showing us the substance of true existence.

“The very idea of miracles happening, however, lingers in many people’s heads. When that dies, it makes people more miserable.”

Belief in miracles gives life a certain air of hope. Chance events that could change everything are something that many people dream of. We all dream of unexpected things happening that will free us from misfortune, poverty, or any other undesirable situation.

However, many of those who believe in these supernatural possibilities often suffer from a sense of disenchantment when they see that they don’t usually occur. In the end, believing in miracles is a path that can easily lead to irremediable unhappiness, especially when faith is somewhat misplaced and relies more on “luck” than action.

“The closer a man approaches tragedy, the more intense is his concentration of emotion upon the fixed point of his commitment, which is to say the closer he approaches what in life we call fanaticism.”

The Greeks defined tragedy as those situations in life where there seems to be no possible way out. Reality happens in such a way that any option seems to lead to misfortune. We all, face these situations at some point.

This is a quote from Arthur Miller that alludes to tragedy, which was a central part of many of his plays. It shows us how human beings experience a kind of extreme concentration when they approach a tragic situation. An example of this is when we know someone we love is going to die and we cling to denial.

“I think now that the great thing isn’t so much the formulation of an answer for myself, for the theater, or the play — but rather the most accurate possible statement of the problem.”

This is one of Arthur Miller’s most interesting sayings. He emphasizes the fundamental importance of questions, rather than answers. In particular, he’s referring here to the description of the problem. In other words, the formulation of the question that one has to work on, both in life and in creative activities.

His approach is very lucid and coincides with how mathematicians approach a problem. Knowing how to enunciate the problem, question, or issue to be solved is an attitude that brings us closer to its resolution in a decisive way. We often don’t find the answer, simply because we haven’t formulated the question correctly.

In Arthur Miller’s works and sayings, we discover a writer who reflected deeply on the human condition. He devoted himself to drama writing because he believed it was an area human beings can see themselves in. His works are very revealing for anyone who wants to go beyond the seemingly apparent. Why not take a look at some of them?

The 7 Best Quotes from Anaïs Nin
The most characteristic thing about these quotes from Anaïs Nin is their originality and honesty. She was a bold writer and wasn't afraid to speak her mind. Read more »
Link copied!
Interesting Articles
Sayings
10 Great Samurai Sayings