5 Affirmations that Can Neutralize a Narcissist 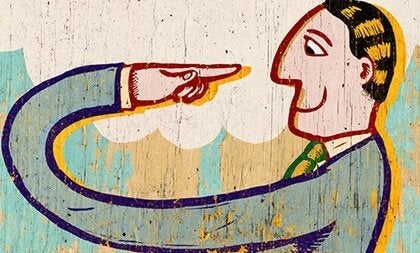 It’s not easy to neutralize a narcissist because they tend to be really charming and have significant social support. Most of them have one or several lovely facets within their personality. They don’t think of themselves as narcissists, but as magical people.

At first, narcissists often make people admire them. This is, evidently, their greatest achievement. It can boost their ego tremendously. In this sense, if ego is the reference point for most human beings, for narcissists it’s even more so.

Narcissists try to be relevant. It’s common for them to be surrounded by people who adore them, which makes confronting them a lot harder. However, there are ways to neutralize a narcissist. You just need to be decisive and stand your ground to do so. Let’s take a look at 5 affirmations that can limit them.

1. “No” – The magic word that can neutralize a narcissist

Narcissistic people want others to say “yes” to every single one of their demands. Additionally, they want those around them to think the same way they do. Having others accept what they say or do is a way to control them. This way, they have a lot of influence or power over others.

The word “no” is a great tool to use to neutralize a narcissist. Not agreeing with them or distancing ourselves from the ideas they propose inevitably harms the image they have of us. Narcissists truly believe that others are ignorant and unable to see reality.

Narcissistic people lie in different ways. They sometimes exaggerate or diminish certain situations or people. On other occasions, they simply make things up to make themselves look good, to bring others down, or even to create fantasies involving them.

If you’re talking with a narcissist and you realize they’re lying, don’t hesitate to question what they’re saying. Demand proof or evidence of what they’re claiming. Express the arguments that make you doubt their story’s veracity. By doing this, they’ll understand that you’re not willing to believe every single one of their stories.

3. You’re neither more nor less than anyone else

Whether implicitly or explicitly, narcissists are really motivated to show that they’re above others. It’s common for them to try to make people realize that they know more, do things better, think more intelligently or, in any case, have an overall better performance than those around them.

It’s good to remind them that although they may be more skilled than others in certain areas, they’re not superior. Tell them that anyone can excel in any area with enough training. It’s okay for human beings to be great at some things and not so great at others.

The best way to neutralize a narcissist is not being afraid of them. These people want others to be insecure just like them. They pay a lot of attention to other people’s weaknesses in order to use them against them at some point. They love talking about other people’s flaws to make them feel inferior.

Not accepting their attacks and taking their words lightly is a great way to show them how unafraid you are of them. Let them be angry, it’s not your problem. Not allowing their attacks to affect you neutralizes them. A narcissist doesn’t know how to act towards those they can’t intimidate.

Narcissists always want to get away with everything. If they’re discussing a topic and realize they’re wrong, they’ll try to change the subject so that they avoid letting the other person know they’re right. If they make an obvious mistake, they’ll do whatever it takes to draw attention to something else. They’re usually very skilled at these manipulations.

If you happen to be close to one, it’s important that you train yourself to realize when they’re beating around the bush and trying to confuse you. Redirect the conversation to what’s actually important. Make them understand that you’re paying attention and that they won’t be able to manipulate you.

Nobody said it was easy to neutralize a narcissist. It requires audacity and courage. However, by the time you learn how to do this, it’ll be impossible for them to manipulate you. The biggest problem of narcissistic people is that, although they won’t admit it, they don’t love themselves. They enjoy using others. Don’t give them the pleasure of falling into their trap!

The Three Masks of Pathological Narcissism
The masks of pathological narcissism are manipulation mechanisms that narcissists use to hide their intentions as well as their true condition. Read on! Read more »