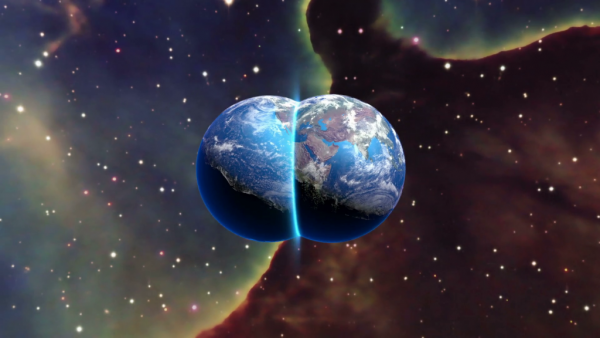 Almost everyone has heard about the impressive parallel universes hypothesis. Although the idea belongs to the field of physics, its ideas and implications are so broad that it overlaps almost all others fields of study.

In fact, discussing the hypothesis of parallel universes can even bring up questions about the meaning of life. This is because this hypothesis questions our basic assumptions about life and death.

“All the evidence shows that God was actually quite a gambler, and the universe is a great casino, where dice are thrown, and roulette wheels spin on every occasion.”

The parallel universe hypothesis is a unique combination of the theory of relativity and quantum physics. Basically, the idea proposes that there’s not just one universe, but multiple universes existing simultaneously, in the same space and time. There are quite a few interesting ideas on the subject. Let’s take a look at three of them.

1. Everyone has an infinite number of lives

According to the parallel universes hypothesis, each person’s existence can develop in an infinite number of ways. Like a “Choose Your Own Adventure” story, if someone is at a crossroads and turns right, they will encounter a certain set of experiences. But turning left would cause an entirely different set of experiences and each choice creates a new universe.

According to this hypothesis, everyone is living an infinite amount of simultaneous lives. The same person might be wealthy in one universe and a beggar in another. Or they might even die in some universes while staying alive in others.

Oddly enough, from the point of view of the parallel universes hypothesis, death doesn’t exist. If someone dies on one universe, they’re still alive in many others. If there’s an infinite number of universes, life is also infinite. This is perhaps one of the most disturbing implications of this hypothesis.

Some physicists think we’re unable to perceive parallel universes, simply because of our limited senses. Humans only have five senses and are unable to use any of them to detect alternative realities.

It’s also been theorized that alternate universes could have completely different physical laws. For example, gravity or electromagnetism could work differently. Therefore, our understanding of the world could be useless or irrelevant under those conditions. Hence, detecting alternate or parallel universes is basically impossible.

Just as the name suggests, parallel universes exist in parallel. Just like parallel lines, they never touch, even though they’re permanently coexisting. It’s been suggested that a collision of parallel universes could cause something like the Big Bang, which means an immeasurably powerful explosion that creates even more universes.

According to M-theory, the universe is like that movie theater, with an enormous group of projections. Various movies are projected at the same time, but they are completely independent of each other. Along the same lines, a multiverse is a group of coexisting but independent universes.

Of course, this is a very elemental and basic explanation of the parallel universes hypothesis. It’s a very complex hypothesis, which many people consider closer to science fiction than reality. That being said, many important contemporary physicists have dedicated years to studying it. Among them was Steven Hawking, who was working on the hypothesis when he suddenly died. At least, in this universe.

The Quantum Mind: How We Can Transform Our Reality
We all have the power to transform our reality and choose the hopes we nurture. But, it's necessary for us to understand what the quantum mind is first. Read more »
Link copied!
Interesting Articles
Culture
New Macho Men: 5 Characteristics to Help You Identify Them

Orgasms are perfectly natural, yet curiously, they are a taboo topic in society. We all know that an orgasm is the intense pleasure sensation that is experienced during sex. Physiologically…

Culture
Coping Resources: What are They?

People tend to use different strategies to deal with problems. These confrontational strategies are known as coping resources. They can…