When You're Embarrassed by Your Family 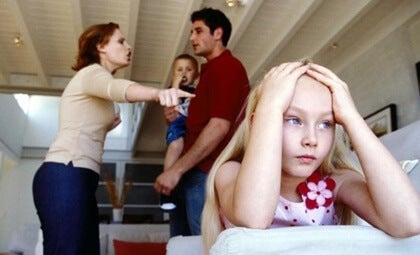 If you’re embarrassed by your family, then you might need to work on yourself. That being said, the majority of family conflicts happen during adolescence, as that’s the time when most people criticize their parents.

However, sometimes those conflicts don’t resolve themselves as you mature and can persist as adults. Shame is a feeling that stems from judging others. You might feel it when some aspect you don’t like about yourself is exposed.

Embarrassment as a feeling

Without going to those extremes, we can say that, usually, feelings of embarrassment stem from a rigid consciousness. Your own consciousness points the finger at you. Sometimes, that finger points at someone else.

There’s a difference between embarrassment and guilt. With guilt, you might feel reproachful and that you’ve lost some dignity. On the other hand, embarrassment affects your personal intimacy, as something you wanted to keep secret came to light. It means that you’ve seen yourself as a failure. Embarrassment kicks in when you feel exposed and suppose that others see you as a failure as well.

When you’re embarrassed by your family

If you’re embarrassed by your family specifically, you probably consider other parts of your immediate environment as reprehensible. You want to keep certain things hidden from others. Sometimes, those aspects are simply objective. However, other times, it’s just a reflection of the way you see things.

You may be embarrassed by your family because, for example, one of them does illegal things. In that case, the embarrassment is more than justified since it’s a risk to your own good name. However, many people are embarrassed due to poverty or physical defects. It might even be that your family doesn’t conform to some predetermined ideal in your own mind.

In both situations, there’s a problem that needs to be solved, as there are aspects you haven’t accepted. Embarrassment is being conscious of having two faces, and the healthy thing is to integrate them into one consistent whole. To do this, you must make consistent decisions with who you are and what you believe in.