What's the Relationship Between Buddhism and the Ego?

What's the relationship between Buddhism and the ego? Buddhism is one of the few psychological and philosophical currents that deny the inherent existence of the ego. Buddhism can change the relationship we have with ourselves and with others. 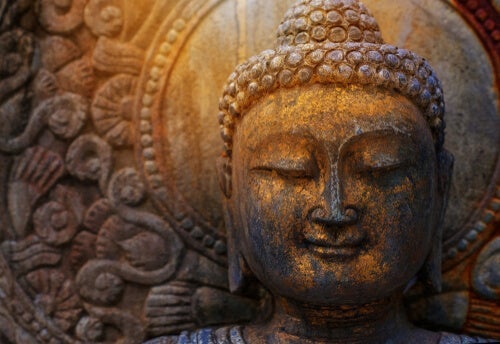 Buddhism and the ego are two inseparable terms. Whoever wants to get into Buddhism, one of the first topics they need to address is the ego. Whoever wants to find out about the ego, then one of the deepest philosophical and psychological doctrines they’ll find will be Buddhism.

So, what’s the difference between Buddhism and the best-known religions with respect to the ego? Quite simply, its lack of inherent existence. That is, according to Buddhism, we don’t exist as we think we exist.

It could be said that a large part of Buddhist knowledge is focused on dethroning the ego. There’s a belief that the ego must be destroyed. However, this isn’t entirely true.

The ego right now occupies a central position that controls and dominates our lives. Buddhism tells us to give it a position of minister or advisor. It’s unquestionable that we all have a name, beliefs, and customs, but if the ego dominates us, then what we’ll be doing is giving it a fixed identity.

However, if we put it in its rightful place, we’ll have more freedom from conditioning, and, therefore, be happier people.

From the moment we’re born, our ego begins to develop. Everything we are and everything we identify with forms our ego. Our nationality, name, membership of different groups, beliefs, and so on… all these form our identity. We accumulate all this information through our memory and turn this into our “self”. However, Buddhism tells us that this isn’t quite so.

According to Buddhism, the ego is the erroneous conception of the “self” as an entity that exists by itself. It’s the idea of the inherent nature of the ego. This is the view of “self” held by a mind that hasn’t understood the concept of emptiness. What’s emptiness? It’s the lack of the inherent existence of all things.

As Zen Buddhist Master Linji told his disciples, “My friends, make no mistake. All phenomena, whether worldly or supramundane, have no nature of their own. They are all unborn, and, therefore, are mere designations, empty names. The expression ‘mere designation’ is, in itself, empty. Why do you see truth in the name? If you do, you are mistaken”.

It’s possible that you may be reading about the concept of emptiness for the first time, and you may find it a little complex to understand. Exploring the relationship between ego and Buddhism is an adventure that invites us to discover new terms and to change or clarify a little the meaning of some terms we already know. Thus, let’s look at the idea of the ego to better understand these two concepts.

Searching for the ego: Where is it? Who am I?

So, is it in your body? Where in your body would your ego be? Is your body you? If, one day, you had an accident and lost your legs, would you still be yourself? Of course; not having your legs won’t change who you are. Your ego can’t change just because it hasn’t got legs. Thus, neither is your ego in your body.

So where’s my ego? Who am I really?

As Indian sage Shantideva stated in the book Bodhisatvacharyavatara: “When ordinary beings perceive phenomena, they consider them as real and not as illusory”. This is what meditators and ordinary people disagree on. So, little by little, we’re approaching the more exact concept of emptiness and ego.

If we look at a table, we’ll think, “This is a table”. But here, two levels of analysis come into play: the relative level and the absolute level. On a relative level, we can say that, yes, indeed, we do have a table in front of us.

However, as an absolute level, the discourse changes. If we look at the table carefully, we can start to break it down: it’s basically four legs holding a board. If we take the table apart, where’s the table? There is no table. If we put the pieces back together, in theory, we have the table again.

Holding on to our ego

When we perceive ourselves in a static and invariable way, we hold on to our ego. In other words, we become attached to it. Ego and attachment go hand in hand. When people say “This is what I’m like”, it’s nothing more than a statement about what little they understand about the possibility of change that they have.

When we become attached to our ego, our identity is strengthened, and with little possibility of change. However, everything can change. When we free the mind from a static identity, then we’re open to change and to external circumstances. This way, the intensity of our suffering decreases.

“If you are free of attachment you have no feeling that anything really belongs to you.”

Another important aspect is that selfishness and egocentrism are born from the ego. As we perceive the world from our static ego, we want everything that happens to fit our expectations and our ideas of what should happen.

“This is the way I am and things should be as I believe they should be”. From the ego arises egocentrism. That is, everything must be as I believe it should be. If something is different from my expectations, then I suffer and get angry. Selfishness also emerges. In our mind, we’ve become the Sun, believing that all the things around us are just elements that should revolve around us.

As psychotherapist, sociologist, and theologian Enrique Martínez Lozano said: “The vine and the branches, the tree and the branch, are they one or two? A branch can rightly say: “I am a branch”, and also: “I am a tree”: However, they aren’t “one” or “two”, they are “not-two”.

He also postulates that “Given the mind’s inability to understand the “not-two”, if one wants to access non-duality then they need to silence the mind, passing from “thought” to “attention”. It can then be seen that “separation is only a mental creation”, and that, apart from nothing, nothing really exists”.

Me and the rest

What’s Martínez Lozano trying to tell us? He’s saying that the ego perceives everything separately: “Me… and the rest”. However, in reality, there’s no observer, no action of observing, and no observed object. All that exists is consciousness, but our thoughts contaminate our perception of reality.

In this way, due to all our thoughts and conditioning, we perceive the world from an ego that we’ve been creating little by little. However, Buddhism says that this is an artificial ego. They say that it’s an ego that doesn’t exist as such, but, rather, that’s made up of many different aspects, and, moreover, all of them are changeable.

Buddhism and the ego: a final reflection

Martínez Lozano gives us a clue to this: “Try to let go of the constrictions that have led you to lock yourself up in (and reduce yourself down to) your mind. What are you when, instead of thinking about yourself, you simply attend to yourself? Your ‘self’ is born from the mind. Silence the mind and you’ll notice how the ‘self” dissolves; it was only a form”.

Ego and Buddhism are, without a doubt, two concepts that go hand in hand. If you decide to delve deeper, you’ll realize there’s a new horizon in your life. A new way of relating to yourself and to others. You’ll be setting out on a path to know what life is in a different, new, and enriching way.

The Three Marks of Existence according to Buddhism
The three marks of existence refer to the three characteristics that are intrinsic to human life. Originally, they were called Tri-Lasana. Read more »
Link copied!
Interesting Articles
Philosophy and Psychology
Eight Unforgettable Yoritomo Tashi Quotes