What Exactly Is a Transpersonal Experience?

Transpersonal experiences are comparable to those in spiritual practices, fasting, shamanic trances, or rituals of different cultures. Today's article will approach the movement that defines this type of experience as an important element of the human psyche. 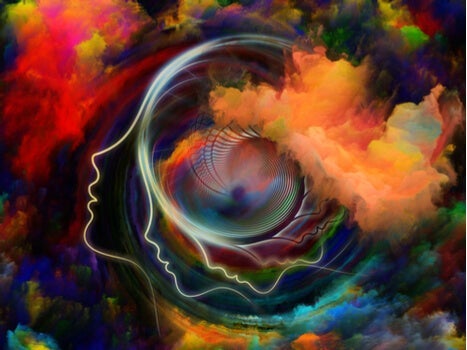 The term transpersonal refers to the transcendence of normal or ordinary limits in a person’s experience. These types of episodes are either mystical, spiritual, occult, magical, or paranormal experiences. In other words, it refers to experiences that go beyond everyday reality.

Western culture has a hard time accepting that these types of experiences are real. Moreover, they’re completely subjective experiences, as the individual is bound by their own skin. Thus, it isn’t possible to study them under the architecture of the current scientific method.

It’s important to clarify that this subject is outside the scientific field. Thus, this article is simply an inquisitive approach to the so-called fourth force that emerges from the most extreme position of humanistic psychology.

Any approach to this school of thought begins with a discussion about the definition of “normal”. A criterion for defining it would be that which encompasses what’s common or admissible in a majority from a social perspective. In other words, anything outside this epicenter is “abnormal”.

The argument of transpersonal psychologists in regard to this fact is to identify that many of the “anomalies” actually represent the first steps and efforts of some people to overcome mediocrity.

In this regard, “normal” is a mere social construct and not a reality. The discussion also goes through the negative or positive connotations one might give to any divergence from what society considers normal.

Regardless of whether there’s normalcy or not, many people have had a transpersonal experience. The therapeutic approach to the problems that may derive from this type of process varies considerably between scientific and non-scientific psychology. Those arising from any major change in people’s lives do too.

A transpersonal experience may occur in people actively involved in finding a transcendental meaning to their lives. However, they can also occur in people who aren’t interested in such matters. These states of consciousness differ from the ordinary and can develop with different levels of intensity.

A transpersonal experience describes a gradual development of a person’s spiritual potential without disrupting their psychological, social, and occupational functioning. The experience intensifies in many cases and is no longer in a given individual’s control.

Transpersonal psychology refers to this as “spiritual emergence“. Psychiatrists Stan and Christina Grof conducted much of their study while caring for people undergoing this experience.

Transpersonal experience – beyond the five senses

One could describe numerous experiences as transpersonal. The list is huge but the most common ones are near-death experiences, energetic phenomena, universal archetypal experiences, overwhelming synchronicities, intuitive comprehension of universal symbols, etc.

Memories of past lives, identification with the consciousness of other human beings or animals, and the development of planetary consciousness are also transpersonal experiences.

For Eastern traditions, these types of experiences aren’t a sign of mental illness. On the contrary, they’re mystical experiences outside of ordinary consciousness and a stepping stone to other types of consciousness. Thus, what’s a problem for Western society is a sign of evolution for a great part of the world. No doubt the question of the concept of normality mentioned at the beginning is quite pertinent here.

Unifying criteria about the transpersonal experience

Transpersonal psychology aims to combine the methodology of conventional psychology with the approaches and disciplines of consciousness from other types of Eastern traditions. This school of thought also offers another way of understanding psychopathology.

The concept of healing for transpersonal psychologists includes the modification of consciousness and spiritual awakening. For them, human beings are much more than their ordinary experiences. They think that transpersonal experiences can generate important psychological improvements when properly attended. The debate goes on.

Transpersonal Consciousness
Transpersonal psychology is the only school of psychology that studies the processes that transcend individual identity and the states of consciousness.  Read more »
Link copied!
Interesting Articles
Curiosities
Are You Neurotic? Here's How You Can Tell