The Story of Two Slaves

The Story of Two Slaves is a reflection on freedom and power. Who's more powerful? The person who exercises dominion over others? Or the one in complete control over themselves? 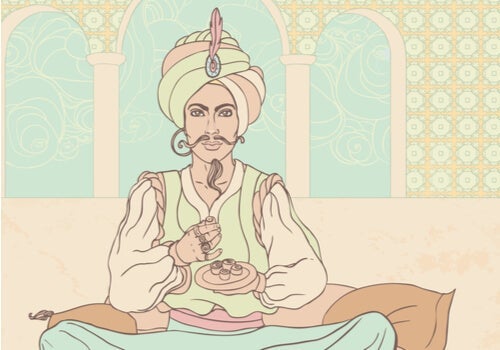 The “Story of Two Slaves” takes place in a distant kingdom ruled by a sultan, recognized everywhere for his kindness and generosity. The ruler didn’t impose disproportionate taxes on his people. On the contrary, he did everything in his power to improve the situation of the most underprivileged. He was also very wise and this trait was quite evident in every decision he made.

The kingdom enjoyed peace and harmony. Poverty, which had once painted the everyday landscape, had disappeared and citizens enjoyed helping one another. They loved and respected the sultan, who had already ruled for 40 years. The “Story of Two Slaves” says that nobody even imagined that their lives were about to change.

The sultan had a son whom he had carefully raised to succeed him, as he wanted for his legacy to continue. It was for this reason that he hired a teacher who patiently instructed the young man in the art of governing. His father didn’t want to lose the harmony they had attained with so much effort and lose the kingdom. Knowing that he was already old, he understood that his son would succeed him soon.

“A man only has the right to look down at another when he helps him to lift himself up.”

The sultan’s son becomes the heir

The sultan was wise enough to intuit that his death was near. Thus, he called his son and announced that he was going to abdicate the throne. He took the opportunity to remind him that the art of governing is an exercise in intelligence in which he had to merge firmness with the sensitivity necessary to listen to the people he served. Then, he advised him to consult his heart when in doubt or while confronted with a dilemma.

Likewise, the sultan explained that sovereignty also implies humbleness. Only by knowing and understanding their own interests and needs, rulers could come to govern them too. Also, he insisted that power could obscure judgment and cloud reason. The only way to avoid this was to keep his spirit free and his heart clean.

According to the “Story of Two Slaves”, the sultan’s son listened carefully and promised his father that he’d live up to the kingdom he was about to inherit. The following day, he was crowned in a lavish ceremony. Just three weeks later, the old sultan died in his bed.

The government of the sultan’s son

The “Story of Two Slaves” says that the sultan’s son began ruling just as his father had. However, he thought it was time for his kingdom to expand before long. For this reason, he began to invade the neighboring nations. Thus, his country’s territories expanded considerably in a short amount of time. The military also brought him new subjects and he enslaved them. He thought that his own people would be better off if they had slaves.

The new sultan felt increasingly powerful. Thus, he decided to continue expanding his domain as far as possible. As a consequence, the continuing war put an end to the peace that used to exist in the kingdom and the inhabitants became irritable and suspicious. Ambition began to take hold of everyone, mainly of the sultan who was no longer kind.

According to the “Story of Two Slaves”, some inhabitants tried to rebel against the new sultan because they longed for the good old times. However, the ruler discovered them and had no mercy on them.

Teaching the “Story of Two Slaves”

Several years passed and there came a time when everyone feared the new sultan. No one dared to contradict him, and this acted like a drug that intoxicated him more and more. He thought himself the most powerful man on the planet and that everyone in his nation had to follow his orders. Thus, to measure his power, he decided to go out on the streets of the capital dressed in his best suit, on the back of his most imposing horse.

The sultan rode his horse through the main streets. Everyone bowed their heads when they saw him. Thus, the silence was almost absolute. When he passed through a humble farmhouse, a man in rags left his house. He stared at the sultan and didn’t bow. The new sultan looked down on him and ordered him to do so.

The man asked if he remembered him. He was his teacher when the sultan was just a boy. The sovereign ignored him and insisted that he kneel down. But the man replied, “Why should I bow down to you if I own two slaves who are your masters?” The sultan turned pale with anger and pulled out his saber to attack the man. But before he took the first step, he heard something he’d never forget, “You’re a slave to anger and greed, two masters that I do dominate.”

The sultan realized the man was right. So consequently, he opened his heart and used his riches to improve the lives of his subjects.

There's a popular saying you probably hear a lot: "It's all in your mind." Even if that's true, it seems like…

Culture
Happiness Rarely Returns to the Scene of the Crime

The brain and spinal cord are surrounded by three membranous layers: the meninges. The three meninges are the dura mater,…