The Role of the Brain in Weight Control

Your brain plays an important role in weight control. In fact, many diets fail because they don't consider how the hypothalamus regulates feelings of hunger. 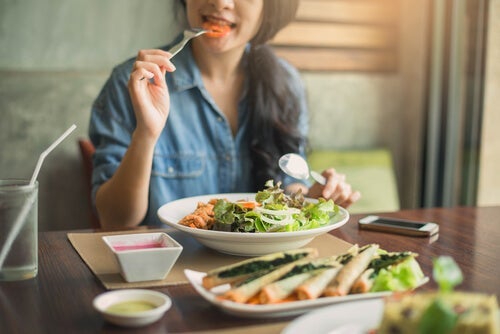 Multiple neuroscientists have concluded that the role of the brain in weight control is significant. It isn’t the only factor that plays a role, of course, but it’s one of the essential ones. In fact, you could lose your appetite due to exclusively physical and physiological factors.

The issue of body weight is one of the most concerning health issues of our time. Doctors worry because obesity and being underweight are both important risk factors for hundreds of diseases. Regular people are concerned because the “acceptable” beauty standards are becoming increasingly narrow.

“To eat is a necessity, but to eat intelligently is an art.”

People all over the world diet constantly in hopes of losing a few pounds. Unfortunately, diets often fail. Or they work for some people and not for others. That’s due in large part because they don’t consider the role of the brain in weight control. But why is it so important? Let’s take a look.

Hunger is a complex phenomenon

Until very recently, the popular understanding was that hunger was a simple stomach contraction that occurred when a person hadn’t ingested food. People believed that the body was a simple machine and needed fuel to function. When the fuel ran out, it had to be replaced.

Today, we know that this is much more complex and that the brain influences weight control. Hunger is one thing and eating habits are another. Some studies have found that people continue to experience hunger even when they’ve had their stomach removed for medical reasons.

We now understand that the hypothalamus is the part of the brain responsible for regulating hunger and thirst. This area picks up on certain signals from the endocrine and digestive system, then tells the body that it’s time to eat something. The hypothalamus also tells your body when you’ve had enough.

The hypothalamus and fullness

A substance released in your intestines signals that you’ve had enough to eat. Scientists call that substance glp-1. It travels through the bloodstream to the hypothalamus. When your hypothalamus receives enough of this substance, your desire to eat goes away.

The issue here is that there’s a 10-minute lag time between when you’re full and when your brain receives the signal. Therefore, if you eat fast, you probably won’t feel full until you’ve already eaten too much. If you eat slowly, on the other hand, you’re more likely to eat the right amount.

The role of the brain in weight control

That should give you a good idea of why the brain is important for weight control, but there’s more to it than that. Neuroscientist Sandra Aamodt has studied the subject in detail and she has one piece of advice for maintaining a healthy weight: eat when you’re hungry. Although it seems simple, it isn’t.

Aamodt says that the brain has a set point. It knows what your ideal weight is and it regulates your appetite based on that. The problem is that many people ignore these sensations. They don’t eat when they’re hungry or they eat too much, even when they’re already full. If you maintain these abnormal patterns for more than two years, the hypothalamus will establish a new set point.

That means that the hypothalamus will set a new “ideal” weight for your body. Therefore, if you don’t eat much, you won’t gain weight and you won’t feel hungry, even if your body needs more nutrients. If you eat too much, on the other hand, you’ll be hungry even though you’ve already eaten everything your body needs. That’s how the brain works in weight control.

As a result, losing weight is often difficult. Your brain fights tooth and nail against you eating less, less than what it’s defined as the “correct” amount. The best advice on how to manage this is to try to prevent it. Eat when you’re hungry, then stop. That simple action can help you avoid more serious problems.

Effective Treatment for Obesity
Around the world, people struggle to find an effective treatment for obesity, and many fail. Why is it so difficult to maintain a healthy weight? Read on! Read more »
Link copied!
Interesting Articles
Hormones
Vasopressin: The Anti-Diuretic Hormone