The Relationship Between Vitamin D and Mood

Did you think that people exaggerate when they say that cloudy days affect their mood? Has someone doubted you after saying that winter brings you down? You're not alone! Continue reading to find out the relationship between vitamin D and your mood. 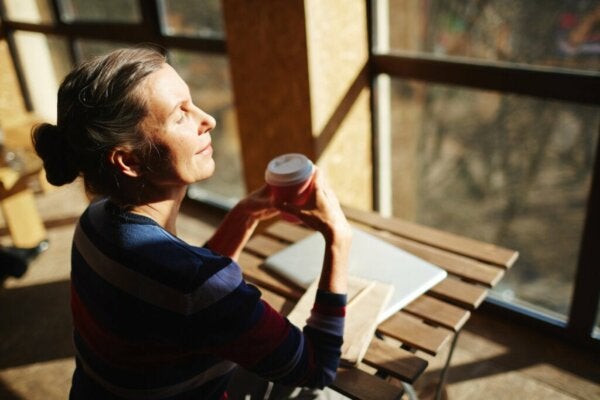 Do you ever feel depressed during winter and fall? Do cloudy, rainy days bring you down? This pervasive feeling that impacts your mood could be due to a vitamin D deficiency due to the reduction of sunlight exposure. Are you spending fewer hours outdoors?

So can a lack of sunshine really cause such an alteration in your mood? Indeed, vitamin D has an important role as a regulator of neurotransmitters related to mood.

In today’s article, you’ll learn more about this vitamin, the impact of its deficiency in your body, and what you can do to have optimal blood levels.

“Ô, Sunlight! The most precious gold to be found on Earth.”

What do we know about vitamin D?

Vitamins are substances that allow the body to function properly. In the specific case of vitamin D, its main function is to regulate calcium and phosphate levels. It’s essential for the formation of the skeleton.

Low levels can lead to rickets in children and osteomalacia in adults. Another of its functions is to modulate the immune system, promoting the transformation of monocytes into macrophages.

You can get this vitamin in three ways:

What’s the role of vitamin D in the mood?

There’s evidence that vitamin D regulates an enzyme that converts tryptophan into serotonin. The latter is important due to its role in regulating moods (improving mood and reducing aggressiveness and impulsiveness, etc.), and in the development of a baby’s brain during pregnancy.

In addition, there’s a clear correlation between vitamin D deficiency and seasonal affective disorder observed in 10% of the population, according to research. This would explain the beneficial effects of phototherapy in patients with this condition.

It seems that the deficiency may be associated with a higher frequency of depressive and anxiety symptoms, without having been able to establish a causal relationship.

It’s really very difficult to know if vitamin D deficiency is the cause of depression or if depression is the cause of vitamin D deficiency. Mainly due to the reduction in exposure to ultraviolet rays and the lack of concern for proper nutrition. So for now, only the coexistence of both circumstances has been verified. Therefore, no studies support the effectiveness of vitamin supplements in reducing depressive symptoms.

In addition to emotional symptoms, the deficiency of this vitamin can be related to the appearance of other mental health problems, such as:

We know the origin of such a cruel disease is still unknown and a multi-causal origin is advocated. However, research revealed the risk of Alzheimer’s is higher in people with vitamin D deficiency.

This is another disorder of multicausal origin, as it has no single known cause. However, due to the role of vitamin D and serotonin in brain development, a deficiency could influence the development of autism spectrum disorder (ASD).

Evidence found that the risk of developing ASD could be reduced if pregnant women supplemented with vitamin D.

A study conducted in the United Kingdom showed that participants who had a first psychotic break had significantly lower vitamin D levels than healthy participants.

Other studies conducted in Finland found that young men who’d taken this vitamin as a supplement to their diet had three times a lower risk of developing psychosis than those who hadn’t.

Sun, please shine down on me

It’s now clear that one can’t determine whether vitamin D deficiency is the cause of mental disorders. However, the health benefits of exposure to sunlight and its impact on the mood are well-known.

Therefore, you can and should increase your production of vitamin D as much as you can by spending time outdoors, even during winter (although clothing would partly limit your exposure to the sun’s rays).

This is particularly important for older people who often spend more time indoors. Vitamin D is important for the preservation of bone mass, in addition to everything mentioned above. Thus, you must promote the exposure of any elderly person0 in your household to ultraviolet rays. Do exercise caution and moderation.

Finally, keep in mind that it’s important to mind your diet, especially in the months when sun exposure is limited. Thus, eat the types of food that are rich in vitamin D. Consult your doctor in case of deficiency, as they can advise you on the best supplements for you.

Your Brain and Vitamin D: Why You Need Sun
Your brain and vitamin D: did you know your brain needs sunlight? Vitamin D doesn't just protect your bones but also protects your neurons and helps you synthesize minerals. Read more »

Link copied!
Interesting Articles
Curiosities
Working with Your Hands Is Good for Your Brain