The Lion and His Reflection 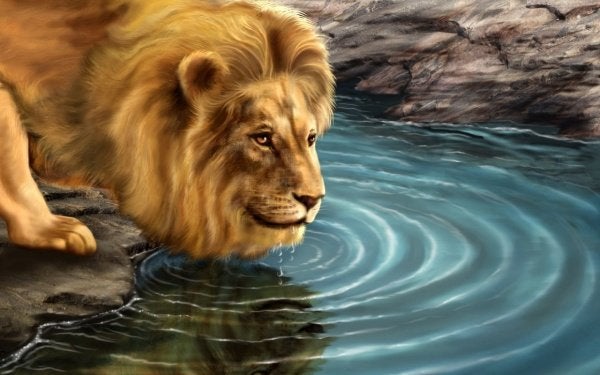 If you aren’t familiar with it, this is a good story with a moral that gets us to stop and think about how we confront our problems and take that much-feared first step that’s necessary for working through them.

Many of us have experienced a situation where a problem consumes us in such a way, it’s as if it were in the air we breathe, the food we eat, the clothes we wear, etc. It seems like everything revolves around this inconvenience as it takes over our thoughts and feelings every hour of every day.

Let’s take a look at the lion’s story:

Once upon a time, there was a lion who lived in the desert. In this desert, the wind would blow so fiercely that the water from the ponds that the animals drank from were wild like the sea. The powerful gusts of wind made the pond waters so choppy, nothing could be reflected in them.

One day, a lion went deep into the forest where he was used to hunting and playing in his free time. He walked through the forest until he began to feel tired and thirsty. He went in search for water until he came across a pond that had the freshest, coolest, calmest water that anyone could ever imagine.

The lion lowered his head, stretched out his neck and went to take a big gulp when, all of a sudden, he became frightened by his own reflection, thinking there was another lion right in front of him.

“This water must belong to another lion. I’d better be careful and leave from here,” he thought. He began to step back, but his thirst quickly returned and urged him to move toward the pond once more. As he got closer to the surface of the water, he saw the head of the ferocious lion with a large mane once again.

The lion crouched down, waiting for the best moment to scare off the “other lion.” As he was used to doing when marking his territory or demonstrating his power, he opened his jaws and let out a mighty roar. But no sooner had he opened his mouth, he saw the mouth of the “other lion” open up, too. As far as the lion was concerned, this was a very horrible and dangerous sight!

Again and again, the lion would back away. But each time he backed away, he would once again find his courage, return to the pond, and have the same frightful experience. After a while, however, the lion became so thirsty and desperate, he decided, “Whether there is another lion or not, I’m going to drink from this pond!” And as soon as the lion plunged his face into the water, the “other lion” disappeared!

What can we learn from the lion?

Distress, anxiety and depression don’t waste time in making an appearance when there are problems. It can even seem as if there is nothing we can do to fix the situation and find a solution. We feel paralyzed and don’t know how to act or what to do. Unfortunately, we will all feel this way at one time or another.

Distancing yourself from the problem just a little can help sometimes. But putting distance between yourself and your problem and asking others for help can also be a tough decision to make.

One of the keys for finding a solution to any problem is working on taking that “first step.” After that, you can later decide how to continue with the rest. If you don’t take that initial step, you will never make it to the top of the mountain. Even though it’s normal to experience fear and worry when being faced with a problem that needs a lot of work, taking that first step helps to alleviate so many more fears and insecurities that are waiting right around the corner.

To do this, you need to begin by creating opportunities instead of waiting for the answer to your problem to fall out of the sky. Eliminating any psychological obstacles or barriers is also very important and will allow you to continue moving forward.

Think of all the times when your real problem was simply not knowing what to do to solve your problem. It’s normal to feel afraid, to want to avoid the situation, to hope with all your might that things will just somehow turn around for the better, etc. But that initial fear is a powerful barrier whose only purpose is to keep you trapped.

Sure, it’s easy to read or write about these things, but they need to be put into practice. Take a moment to be more like the lion and understand the difference between trying to do something and deciding to just do it. When you are only trying, it’s easier to give up when you start to doubt yourself. In turn, actually doing something and seeing the changes that follow gives you the feeling of confidence that you need to continue moving forward.

You are the one who decides which side you will take. Are you ready to be the “king of the jungle”?

Link copied!
Interesting Articles
Literature and Psychology
How to Write Like Stephen King

The word 'feminism' makes young people nervous. Conditions of gender inequality are still very common. And, even though there's been a…

Communicating better is one way to make your life easier and more rewarding. Much of our difficulties with others, and…