The Impact of a Wound that Doesn't Scar

When you feel there's a wound that doesn't scar in your life, it means you have some pain that hasn't reached its conclusion. To end it, you'll have to let that person, situation, or beloved object that'll never come back go. This way, you'll be able to build a new life, get along with others, and keep moving forward. 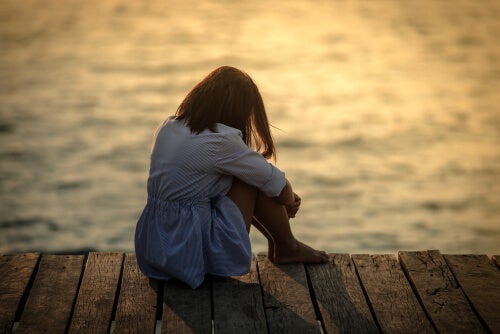 Being torn away from someone you love, whether through abandonment, a breakup, or death, causes suffering. It’s an experience that can happen at any age and under diverse circumstances. Sometimes, that loss leaves behind a wound that doesn’t scar. In those situations, pain can become a way of life.

No period of grief just goes away or is overcome on its own. Of course, time does help, but if you don’t develop a new personal story regarding what happened, it’s very possible that you’ll find yourself attached to a wound that doesn’t scar. You might even come to stop being able to feel the pain, at least consciously. Nevertheless, that same pain will gravitate around your life in different ways.

Mourning involves restructuring your psychological world. It should be able to give way to acceptance of the events that occurred. It should also bring about a transformation in your way of living and being. Only if you can reach this level will you experience that metamorphosis. Only then will you achieve the reduction of the pain that afflicts you and the ability to close the door on that wound that doesn’t scar.

“The private wound is deepest.”

The word “mourning” has two accepted meanings. The first refers to the pain and suffering that you feel when you lose something you loved. The second is a conflict between two opposing experiences. Both processes are present in mourning.

On one hand, there’s sadness and yearning for things that aren’t there and will never return. On the other hand, there’s the fact that you need to confront yourself in the context of this situation. During mourning, there’s, necessarily, a certain tension between the past and the future. This tension concentrates itself in the extreme within the present.

Mourning doesn’t solely refer to what happens when you lose a person. You can also experience it when you lose situations or even objects. You suffer when you feel you’ve lost your youth or certain ideals. One might also lament the loss of money or certain opportunities that you never took advantage of.

That pain and suffering can awaken in different ways within each individual. This depends significantly on the psychological structure of the person. The concrete circumstances in which the loss came about also play a role. Usually, people try to deny and complain about this loss. As time goes on, some come to accept it. However, others refuse to do so.

Mourning as a wound that doesn’t scar

Unresolved mourning is a wound that hasn’t scarred. It’s pain that the person is holding in and it doesn’t go away as time goes on. You can cover it or suppress it, but it’s always there, like the curtain of the background of your life. No mourning process is easy. In many cases, it doesn’t go away quickly either. This pain may be compounded by the fact that we live in a culture that demands instant gratification.

For a time, how long it lasts will depend on the loss and the level of emotional pain. That is to say, first, there’s going to be sadness, then apathy. It’s also likely that your performance at work or school are going to be affected. You might even find it difficult to enjoy the company of others. At various points, that suffering will be the only thing you’ll have for sure.

Loss is the beginning of a period of mourning. It’s something that none of us wants. On the contrary, it wouldn’t be the case of suffering. As mourning evolves, it becomes a process of losing that which you loved again, but this time, you’ll be the one to cause the loss. That’s because you’ll be the one who will restructure your own ideas and feelings. However, sometimes people refuse to carry this process out.

Signs of a wound that doesn’t scar

There’s also pain that arises from pain. In general terms, it tends to last between six months to two years. One of the most painful experiences is losing a child. It’s so strong that there’s no word in our language that designates that type of loss. There are orphans and widows, but there’s no term for a mother or a father who loses a child.

A wound that doesn’t heal is really just a mourning process that hasn’t reached its conclusion. First, there’s a refusal to accept what’s happened. Sometimes that denial takes the shape of cynicism or aversion. In those cases, people become extremely sensitive to minor situations. They might also find it impossible to genuinely connect with themselves. They come to feel as though they’re living a mechanical life.

At other times, repressing mourning can lead to sickness. You might develop a more serious mental disorder or even physical illnesses. You may even turn bitter. In extreme cases, you could turn to self-destructive or irresponsible behaviors. Every loss that doesn’t lead to a positive transformation is suspicious and you should consider it as such.

It's hard to accept that nothing will be the same. But things do go back to normal, as hard as…