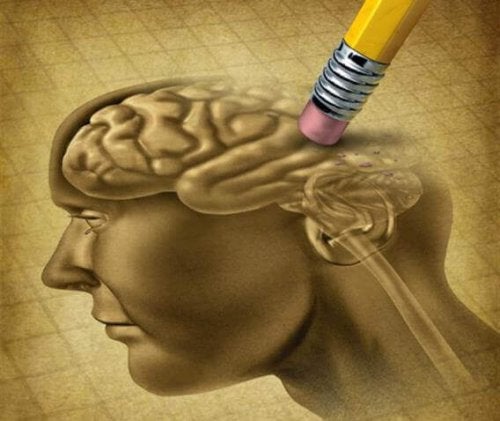 Ebbinghaus (1885) was the first to study the systematic way that we forget things over time. We are all aware of this phenomenon on an intuitive level, which is why we review information that we want to remember so it doesn’t disappear . We all travel along the forgetting curve, though we might not explain it like that.

The most interesting thing is that Ebbinghaus was his own subject for his research. He wanted to study this phenomenon that we all experience to different degrees. By experimenting on himself, he was able to define what we know today as the forgetting curve.

As we said before, Ebbinghaus was the first psychologist to scientifically study the memory. Or, at least, he was the first to try. He attended the University of Bonn, where he got his doctorate in 1873. As he developed his skills as a researcher, Ebbinghaus always believed that quantitative analysis methods were applicable to higher-order mental processes.

In other words, Ebbinghaus believed that there were ways to measure things in psychology and measure them well. He didn’t think twice about using a variable that we all use to measure every day – time. In this case, the time of forgetting.

He carried out a series of reliable experiments using the monitoring tools that were available at the time. His intent was to describe our memory function based on a set of laws.

For example, he did a test called the recall test. He used it to explore memory. It was based on the repetition of phrases in which some words had been purposely omitted. He hoped to discover something about the nature of learning and forgetting. He also hoped that his research would have practical value for the field of education.

“Ebbinghaus was the first psychologist to scientifically study the memory”

Many critics of Ebbinghaus’s work say that he shouldn’t have focused so much on verbal repetition. They believe he should have studied how memory worked in everyday situations. They hold it against him that his results were great for controlled lab conditions, but not for real life. In real life, our memory works under conditions that are hard to replicate in a lab. You have to take motivation, unintentional review, and emotional influence into account.

Some of his most important works are The Intelligence of School Children (1897), Memory (1913), and Textbook of Experimental Psychology vol. 1 (1902) and 2 (1908). Before we talk about the forgetting curve, you must understand some basic things about memory and learning. That will help you better comprehend the importance of this curve.

It isn’t easy to formally define learning. There are many different opinions about how to define it. Each one emphasizes a different facet of this complex process. One definition of learning refers simply to observable behavior.

For example, the fact that someone knows how to drive a car well means that this person learned how to drive. Another definition of learning alludes to a state of inner awareness. That can be demonstrated by giving examples of how a theory might take effect.

“Learning is an inferred change in the mental state of an organism. This change is the consequence of experience and it influences the potential of the organism to adapt to change in a relatively permanent way.

Many dictionaries define this type of learning as “awareness acquired through study”. In everyday language we say this is learning the Greek alphabet, memorizing the names of inner ear bones or the stars in the Cassiopeia constellation. Both perspectives (observable behavior and internal states) are important points of view. They are both compatible with the contemporary theory of learning.

So, we can define learning as, “learning is an inferred change in the mental state of an organism. This change is the consequence of experience and it influences the potential of the organism to adapt to change in a relatively permanent way.”

The laws of association directly influenced the study of learning. There is no better example of this than the work of H. Ebbinghaus (1850-1909). According to Ebbinghaus, we could better study the association between two mental events using stimuli devoid of prior association.

So, in order to work with stimuli that had no meaning, Ebbinghaus used “nonsense syllables.” Syllables like BIJ or LQX that, according to Ebbinghaus, had no inherent meaning. Ebbinghaus invested a lot of time associating one stimulus with another.

Working like this with meaningless syllables, he tested many of the principles of association. These principles were developed more than 100 years before Ebbinghaus did this. For example, he compared the strength of association between two stimuli written next to each other compared to two that weren’t close.

Ebbinhaus’s research confirmed many of the ideas first proposed by British empiricists. For example, they theorized that proactive associations were stronger than retroactive ones. That is, suppose syllable A precedes syllable B. Ebbinghaus found that A evokes the memory of B better than B the memory of A. Interesting, right?

To study learning is to study memory and, therefore, the forgetting curve. Keep in mind that learning wouldn’t be possible without the memory. Each execution of a learned reaction requires the total or partial memory of the past execution.

Everything that we remember and learn goes through three phases: codification, storage, and recall. In the first phase of all learning, the first thing you do is codify the information. You translate it to the language of the nervous system and make space for it in your memory in that language.

Then, in the storage or retention phase, the information or knowledge lasts through time. In some cases, this phase is relatively brief. For example, information in short-term memory lasts approximately 15-20 seconds.

“The three phases of memory are: codification, storage, and recall.”

In other cases, storage can last an entire lifetime. This type of storage is called “long-term memory.” Lastly, the recall or execution phase is the phase in which you remember the information. You remember and then respond, offering proof of previous learning.

If execution is adequate with respect to the level you had during acquisition, then forgetting is minimal. However, if execution declines significantly, then you have forgotten. Sometimes it is simple to quantify how much time you’ve taken to lose a concrete part of something you previously codified.

Why do we forget?

An important challenge for psychologists is to understand why memories last after we codify them. They also want to understand why we forget things after learning. There are several ideas that try to answer these questions.

Some storage theories focus on what happens to the information during the storage phase. For example, the decline theory posits that we forget because the memories weaken. Their strength declines during the period of retention. You can compare it to what happens to footprints in the sand at the beach.

There is evidence to back up this theory. However, few contemporary theorists describe forgetting in terms of memory decline.

On the other hand, the interference theory says that we forget because we acquire elements of memory that compete with others during storage. For example, acquiring new information makes you forget old information (retroactive interference.) That happens when a problem is too wordy and complex. If it isn’t simple, we lose it.

At the same time, the presence of prior information can interfere with the expression of recently formed memories. That is called proactive interference. For example, we remember someone’s telephone number better if it is similar to our own.

Recall theories say that we forget due to a failure to recall information during the execution phase. That is, the memory “survives” storage, but the subject simply can’t access it.

The passage of time appears to have a negative effect on storage ability. As we mentioned before, Ebbinghaus (1885) was the first to systematically study memory loss over time. He described what we now know as “Ebbinghaus’s Forgetting Curve.” The concept of a “curve” refers to the graph that he drew as a result of his research.

We’ve mentioned that he was his own research subject. We also know that the research consisted of learning lists of 13 syllables. He then repeated these lists until he could do it twice consecutively without any mistakes. Then, he evaluated his ability to retain the information in intervals of time, from twenty minutes to a month. He based his famous forgetting curve on the results of these types of experiments.

“One of Ebbinghaus’s conclusions was the the simple passage of time has a negative effect on retention ability.”

What kind of results did Ebbinghaus get?

These results try to explain how much time we can keep information if we don’t review it enough. The results of this study showed that we forget things even in the shortest intervals. He also found that if the material is meaningless and devoid of associations, forgetting increased over time. We forget a lot at first, and then more slowly later on. So, if we graph this information we see that the curve is logarithmic.

The forgetting curve illustrates memory loss over time. Another related concept is the intensity of a memory. That indicates how much time content is retained in the brain. The more intense the memory, the longer we retain it.

A typical forgetting curve shows how we forget the majority of what we’ve learned within a few days or weeks. This happens if we don’t work to review the information. He also found that every review allowed the second to be further down the line if we want to maintain the same amount of information. So, if you want to remember something, maybe the first review should be an hour later. That way, we can wait longer for the next review.

The memory curve has a pronounced slope when we memorize nonsense material, which is what Ebbinghaus did. Nevertheless, for traumatic experiences, the slope is almost flat. On the other hand, a weak slope is probably due to implicit review rather than the nature of the information. That is, when we relive experiences or use the alphabet, we remember them better.

Here is a practical example of how quickly we forget information, and thus why the forgetting curve exists. If you don’t review the information, a day after studying it you will forget 50% of what you learned. 2 days later, you won’t remember even 30%. 1 week later, you will be lucky to remember more than 3%.

Psychology
You Create Your Own Reality

Do you know what is real, what is truth, and what is a lie in this world of experiences? As set forth by Immanuel Kant, “We can cognize things a priori…

Psychology
Philophobia: The Fear Of Love

Psychology
Love is the Best Medicine for Wounded Hearts

Love is the deepest, most intense feeling we can experience in our daily lives. It moves millions of people around…