The Characteristics and Functions of Testosterone

We don't only find testosterone in the male body, but also in a woman's ovaries and adrenal glands. Because of this, it's one of the androgens (male sex hormones) that exist in women. 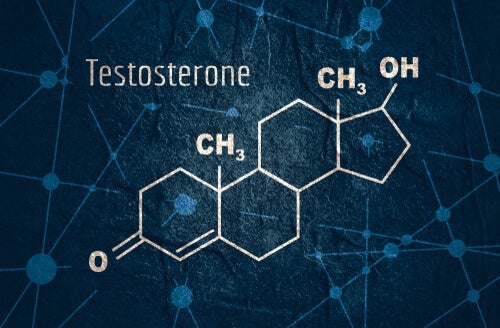 The main functions of testosterone are testicular and brain differentiation, as well as the development of primary and secondary sexual characteristics. So, as we can see, testosterone isn’t only what many people commonly know as the male hormone. This hormone is present in both sexes at birth and plays its role in everyone’s life.

Testosterone is a steroid hormone synthesized from cholesterol in the Leydig cells of the testes. It’s also synthesized in the theca cells of the ovary and in the zona reticularis of the adrenal glands (1).

Moreover, the socially-held conception of testosterone as a hormone linked to aggressiveness is largely a myth. Testosterone plays other important roles in health.

The functions of testosterone in men

Testosterone is the main sex hormone in men and has many functions:

When male teens have low testosterone, then they may experience a somewhat different masculinization from most of their peers. For example, the genitals may not enlarge, facial and body hair may be sparse, and their voices may not deepen.

In males, signals from the brain to the pituitary gland control testosterone production. The pituitary gland then signals to the testes that they need to produce this hormone. In addition, a “feedback loop” closely regulates the amount of the hormone in the blood.

When testosterone levels are too high, the brain sends signals to the pituitary gland to reduce production.

What’s the function of testosterone in women?

As we already mentioned, we don’t only find testosterone in the male body; it’s also present in a female’s ovaries and adrenal glands. Therefore, it’s one of the androgens (male sex hormones) that are present in women. Experts believe testosterone has important functions in women, such as the following:

For the ovaries to function well, it’s important for there to be a proper balance between testosterone, along with other androgens, and estrogen. Although the evidence is inconclusive, experts believe that androgens may play an important role in normal brain function (including mood, sexual desire, and cognitive function) (2).

How does the body control testosterone?

The regulation of testosterone production is tightly controlled. This is because blood levels need to be maintained, although they’re usually highest in the morning and decrease during the day.

What happens when the body produces too much testosterone?

When there’s too much testosterone in a man’s body, the following problems can occur:

In women, high levels of this hormone in the blood may also be an indicator of polycystic ovary syndrome. Women with this condition may notice increased acne, increased body and facial hair, balding at the front of the hairline, and/or increased muscle bulk.

As you can see, it seems that testosterone is a vitally important hormone in both men and women. For both sexes, it’s important to ensure a correct regulation of this hormone in the blood. If not, then problems such as the ones we’ve mentioned can occur.

6 Types of Hormones and the Moods that Go with Each
The different types of hormones in our body do more than just perform vital functions in certain biological processes. Whether we like it or not, they also condition our behavior and even our mood. Read more »
Link copied!
Interesting Articles
Hormones
What Are the Happiness Hormones?

Progesterone is a female hormone that belongs to the steroid family. A woman's ovaries produce and release it. Along with…