The Catcher in the Rye: a Cursed Book 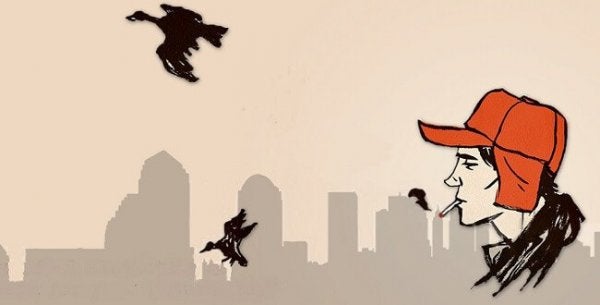 The Catcher in the Rye is one of the most well-known American books of the twentieth century. The writer, J. D. Salinger, managed to capture the essence of adolescence in this novel. Even though reviews were harsh at first, the public still admired it. Through time, it became the literary work that best portrays adolescence. Its direct and vulgar language reflects reality. However, it also was very controversial when it was first published in 1951.

Despite the changes society has gone through, the technological advances, and the evident differences between teenagers then and teenagers now, The Catcher in the Rye is a novel that, to this day, still reflects the reality of teenagers who have a hard time adapting or fitting in the system. Those teenagers who experience the stage between childhood and adolescence as a time of survival, rebellion, and internal struggles.

The plot is quite simple. It’s about a young man named Holden Caulfield who tells his experiences in the first person. He’s a bad student, he’s been expelled from various schools, and his situation doesn’t seem to get better since they just told him he had been expelled from his last school as well. Holden decides not to tell his parents because he doesn’t want to see them. Instead, he goes back to New York in the middle of the night and stays at a mediocre hotel. That’s where his adventures begin.

The Catcher in the Rye tells Holden’s journey. He’s a teenager who’s unhappy with the world and seems to hate everyone and everything. This novel has gone down in history as the favorite of psychopaths, misfits, people with mental issues, teenager, and even adults. Why was it so successful? Why is it so controversial?

The Catcher in the Rye, a reflection of adolescence

Many people see themselves in Holden. Adults don’t relate to him as much as teens, though. What’s the key? The key is to draw an easily recognizable and relatable character who’s rebellious and on the verge of misanthropy.

For a lot of people, adolescence is just the transition to adulthood, nothing else. An irrelevant stage of life where we focus on school and the future and take on new challenges and responsibilities.

For others, however, adolescence is much more complex and obscure. Pressure and both personal and educational responsibilities can be strong obstacles. Learning to understand the world and owning up to our actions might hinder this stage of life. Drugs, alcohol, experimenting, sex, and getting to know how the world works are all parts of adolescence.

During this time, we pay attention to music, movies, and the media. We look for things we can identify with, we want to learn more about ourselves in different ways, and we just want to feel like we belong in this world. Holden hates everything that has to do with life. He hates everyone, his school, society, the system, and the world. The only people he cares about are his siblings. He doesn’t even seem to care about his parents.

“I’m always saying ‘Glad to’ve met you’ to somebody i’m not at glad I met. If you want to stay alive you have to say those things, though.”

One of the most striking aspects of this novel is the fact that it’s narrated in the first person and that it uses a very adolescent-like vocabulary. Holden uses slang and popular rude sayings. He uses improper language when talking about historical events.

We relate to him because of the way he expresses himself. His language is natural and ordinary. His physical descriptions are very accurate to adolescence, too. While reading, you might see allusions to bitten nails and acne, which are typical during puberty.

Another striking fact about this novel is that it lacks action. Yes, Holden flees and has a hard time after, but nothing too crazy happens. The action is static, just like adolescence is. Holden simply confines himself to narrating his thoughts and criticizing everything he can. He thinks about himself, what he likes and doesn’t like, and on how uncomfortable the world is. The Catcher in the Rye touches on the transition from childhood to adolescence and the difficulties it comes along with.

Holden describes himself as “the catcher in the rye” because that’s what he wants to be. He wants to be in charge of picking up the children who run alone into the abyss. Holden wants to protect them from the shock that implies the end of their childhood and the beginning of a time where they must be conscious of reality.

How come a book that reflects adolescence is the favorite of so many criminals? Perhaps the sentiments that are reflected in the book (Holden’s misanthropy and his feelings of not belonging anywhere) can be some of the reasons why some criminals perceive this novel as some kind of Bible.

It’s easy for us to feel connected to Holden in determined moments of our lives. We might see ourselves in him. The way he thinks and the way he feels might sometimes reflect how we truly feel, which can help us not feel alone during those times.

The list of crimes committed under The Catcher of the Rye‘s shadow is quite big. Most of them have fallen into oblivion because they were minor crimes or crimes committed against anonymous people. However, the most remembered crime is by far the murder of John Lennon.

John Lennon was murdered by Mark David Chapman, an admirer of his who saw Lennon as one of those children running into the abyss that Holden described. Chapman believed that, by assassinating him, he would save him from the disturbances of the world, allowing his innocence to survive. After committing the murder, Chapman read The Catcher in the Rye until the police arrived. In the book, he had written “my confession” and signed it as Holden Caulfield.

Robert John Bardo and John Hinkley are other names that resonate when talking about this novel. Bardo murdered young actress Rebecca Schaeffer and Hinkley tried to assassinate Ronald Reagan. Both were carrying a copy of The Catcher in the Rye while doing so.

This novel has a great legacy due to its popularity and the darkness that surrounds it, from urban legends to music inspired by this “cursed” book. This is a must-read for teens and is direct and open.

“What really knocks me out is a book that, when you’re all done reading it, you wish the author that wrote it was a terrific friend of yours and you could call him up on the phone whenever you felt like it. That doesn’t happen much, though.”

8 Must-Read Books
Finding a book that truly touches your heart is like discovering a rare and valuable treasure. Read more »
Link copied!
Interesting Articles
Literature and Psychology
Altered Carbon: The Relationship Between the Mind and an Altered Body