There's a lot of magic and depth in these George R.R. Martin quotes. The author who gave us Game of Thrones is an avid reader who extols intelligence, creativity, and the greatest human values. 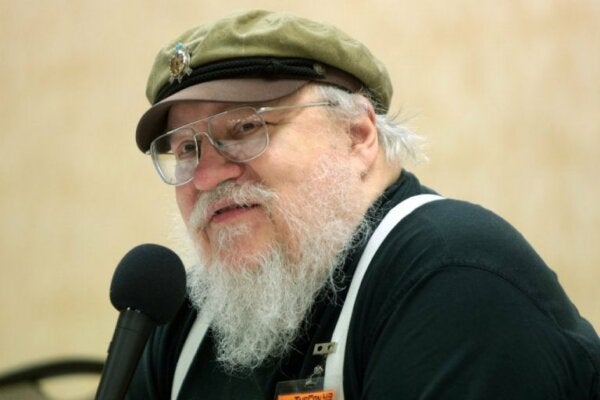 These quotes from George R.R. Martin have that special touch of writers who move between cruel reality and the magic of fantasy. This American author, the genius behind the fantastically popular Game of Thrones series, is one of the most original writers of our time.

Martin is a prolific writer who had his first taste of fame in the 60s. Later, he started to combine use his writing skills to work on Hollywood screenplays. Maybe that’s why his quotes almost always have a dramatic touch.

“When you tear out a man’s tongue, you aren’t proving him a liar; you’re only telling the world that you fear what he might say.”

What not many people know about Martin is that he wrote for the famous 1980s TV series Beauty and the Beast. In his scripts for the show, you could already see the makings of a great fantasy writer.

Today, we’ll share with you some of the most interesting quotes from George R.R. Martin.

This quote is a beautiful homage to readers. Martin wrote, “A reader lives a thousand lives before he dies… The man who never reads lives only once”. For Martin, reading opens doors, to read is to experience countless adventures and see new worlds.

Reading is a way to travel through time and space. You can go to the past, the future, and anywhere on (or off) the planet. Sometimes, a book is so compelling that the reader starts to feel like they’re part of the story. It’s the closest thing we have to seeing the world through someone else’s eyes.

A quote from George R.R. Martin about the world

Martin has an indisputably vivid imagination, but his creations are, in a way, deeply realistic. While his stories about people and situations that could never exist in real life, the worlds he creates are ruled by a perfectly comprehensible logic.

In this quote, for example, “Why is it that when one man builds a wall, the next man immediately needs to know what’s on the other side?” This quote refers to events taking place in an imaginary world, but it very clearly speaks to the nature of human behavior. It’s true on a literal and figurative level. Humans are curious, never satisfied with what’s on their side of the wall.

One of the recurring themes in George R.R. Martin’s quotes is books. Martin was an avid reader from a young age. He says that books and reading were what nourished his ability to create the stories that would later make him famous.

This quote alludes to that idea: “A mind needs books as a sword needs a whetstone, if it is to keep its edge”. Note that he doesn’t talk about learning or information, but reading itself as food for the mind.

What the gods do

The worlds of George R.R. Martin are filled with fantastical beings; sometimes terrible, sometimes marvelous. His literature is a combination of science fiction, fantasy, and horror. Consequently, his stories always have elements of magic. As with any good art, these elements bring us closer to the real world.

This quote from George R.R. Martin says: “The Gods give with one hand and take with the other”. Here, he’s referring to the balance that exists in what we call destiny or fate. In general, when you gain something, you lose something else. This is the work of the invisible logic that Martin calls “the Gods” and that corresponds to the balance that comes along with events in our lives.

Most of George R.R. Martin’s stories are filled with epic situations and heroic characters. Consequently, there’s never any shortage of fighters or warriors. His characters deal with extreme adversity and tests of character, and they’re motivated by their ideals, goals, or passions.

Nevertheless, he also includes a sort of vulgar version of a fighter, which he defines in this quote: “A man who fights for coin is loyal only to his purse”. He’s referring, of course, to mercenaries. Not necessarily only in times of war, but a mercenary in every sense of the word. A person who can be bought and sold, who isn’t loyal to any particular creed.

George R.R. Martin is part of a new guard of creative geniuses who use innovative language to communicate with the world. His books, like any great novels, are profound and speak universal truths. We hope that he continues to write and delight readers with his incredible imagination.

Five Jane Goodall Quotes to Reflect on
These Jane Goodall quotes have a wonderful purpose: to restore human beings' respect towards nature. She's one of the most revolutionary scientists. Read more »
Link copied!
Interesting Articles
Literature and Psychology
Life of Pi: Imagination as a Defense Mechanism