Ten Minutes of Exercise a Day Can Make You Happier

Do you think it's true that ten minutes of exercise a day can make you happier? Let's see what science has to say about it! 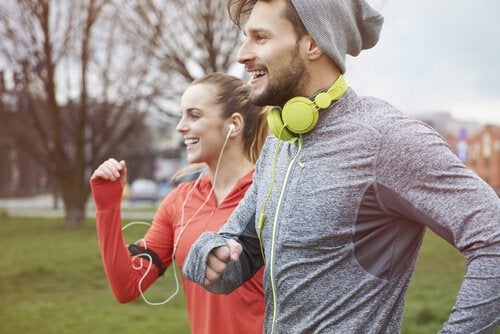 Science is constantly evolving and moving forward. Now, it confirmed that only ten minutes of exercise a day can make you happier.

Everyone is aware of the overall benefits of sports and physical activity. Exercise allows our body to release well-being hormones that can make us more joyful and happy

This study was carried out at the University of Michigan. A group of researchers explored the relationship between positive emotions and exercise, focusing especially on mentally healthy people.

We already knew that physically active people have a lower risk of suffering from anxiety and depression. However, this new study demonstrated the positive and healthy impact of moderate exercise.

In other words, you don’t have to spend a lot of hours at the gym or go for a walk every day. Although those things aren’t bad at all, you can still reap the positive emotional benefits of exercise with a lot less effort.

The development of the study

The researchers analyzed the data of more than half a million participants of 23 studies that linked happiness to exercise that had been carried out since 1980.

Once they analyzed the data and proved that the participants of the different studies belonged to a wide range of socioeconomic and ethnic groups, they proved, by comparing sedentary and active people, that exercising for only 10 minutes a day or once a week helped them feel happier.

Thus, ten minutes of exercise a day can make you happier. But in order for the happy effect to last, you must make regular exercise a habit.

The researchers, led by Professor Weiyun Chen, were shocked by the results. Chen declared in the publication of the study in the magazine The Journal of Happiness Studies that those who exercise moderately have a tendency to be happier.

The researchers emphasized the feeling of well-being produced by a healthy body and the social interactions that arise from exercising. Other specialists affirmed that exercising aids weight loss and thus boosts self-esteem and improves body image.

Other benefits of exercising

Exercise also helps us focus on one activity at a time, which reduces mental noise and negative thoughts.

When we exercise, we also release serotonin, dopamine, and endorphins. These three neurotransmitters are respectively linked to calmness, pleasure, and a euphoric state.

Did you ever imagine that ten minutes of exercise a day could make you happier? So what are you waiting for? Start exercising today!

“The glory is not winning here or winning there. The glory is enjoying practicing, enjoy every day, enjoying to work hard, trying to be a better player than before.”