The symptoms of dysthymia, otherwise known as persistent depressive disorder, can last for years. If the condition isn't properly diagnosed and treated, it can lead to major depression. 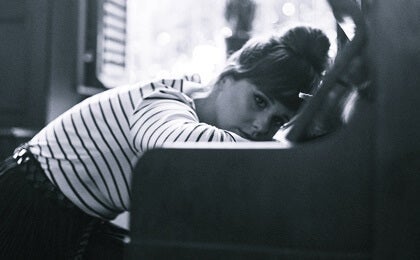 The symptoms of persistent depressive disorder, or dysthymia, tell us that this condition is a lot more than chronic sadness. In many cases, this clinical condition is the prelude to major depression.

However, the worst part is that a person can spend months and even years with a suffocating sadness, they don’t know the cause of. All they know is that their quality of life is greatly impaired.

The brains of people with depression work very differently from the brains of those who don’t suffer from the condition. Thus if a person with dysthymia got an MRI, they might see something very striking. They’d see an imbalance. In addition, the areas in charge of regulating thought, sleep, appetite, and even decision-making have problems communicating, which means they work more slowly.

These psychological realities can’t be seen on the outside. Persistent depressive disorder doesn’t leave a mark, doesn’t cause fever, and doesn’t completely incapacitate you from going to work or relating to people. However, you know that something is wrong with you.

Life hurts and becomes slow, difficult, and dark when a person has to live with dysthymia as a permanent co-pilot who gradually takes control of each and every situation.

Therefore, it’s vital that we learn to recognize the symptoms. Detecting this condition early on can prevent it from worsening. This is because clinical data reveals that the risk of it developing into major depression is 50 percent.

“I walk slowly, but I never walk backward.”

The symptoms of persistent depressive disorder

In the latest edition of the Diagnostic and Statistical Manual of Mental Disorders (DSM-5), dysthymia or dysthymic disorder was renamed as persistent depressive disorder. This designation describes a clinical condition that can last between six months and two years. Nevertheless, it isn’t as serious as major depression.

Studies, such as this one conducted at the University of California by doctors C.T. Hoepner and M. Zetin, show that it’s wrong to consider this condition a minor or mild depression. While major depression causes intense or limiting symptoms, dysthymia has less debilitating but chronic ones.

We’re talking about discomfort and heaviness that affect the sufferer day after day, month after month. Eventually, these symptoms undermine the patient’s mood considerably.

Because of this, we shouldn’t call it a minor disorder. On the other hand, it’s worth noting that, in many cases, dysthymia has a genetic factor and affects more women than men.

Some people believe that feeling this way is, in many cases, an extension of the feelings that predominated in childhood. Assuming that this is a determining factor is a serious mistake, as it would normalize the condition.

Although depression causes different symptoms in each person, some common ones make up the most important diagnostic criteria. These are occurrences, usually subtle ones, involving feelings and emotional states. Although they aren’t as serious or disabling, they end up affecting the patient because of their persistence.

The person may feel able to work, relate to others, or do leisure activities. However, they do them out of “obligation” rather than anything else. They aren’t really motivated to do them, nor do they experience pleasure when they do so.

To be diagnosed with this condition, these symptoms should last for at least two years.

What’s the treatment for dysthymia?

Once you identify the symptoms of persistent depressive disorder, it’s essential to seek professional help. Even though more women suffer from it than men, there’s a high possibility that men are rather reluctant to ask for help.

This condition doesn’t disappear on its own. It’s like a virus that lodges itself inside until it totally weakens the host.

The most common therapeutic strategy is twofold:

In conclusion, each person will benefit from a particular type of treatment. In one way or another, persistent depressive disorder can be treated and its prognosis is usually good. Never hesitate to ask for help so you can enjoy the well-being you deserve.

4 Therapeutic Metaphors for Depression to Help You Reflect
Therapeutic metaphors for depression make it easier for the person to reflect on their situation, by using an idea, a story or a possibility. Read more »
Link copied!
Interesting Articles
Clinical Psychology
Co-Addiction - Characteristics