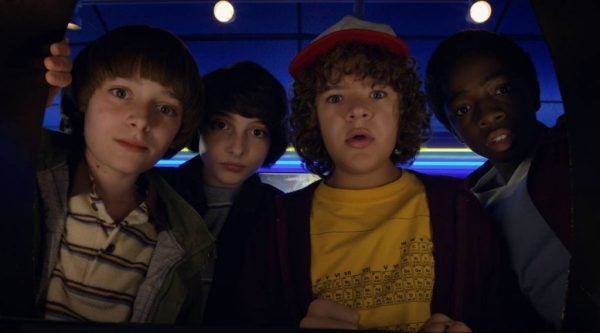 Post-traumatic Stress Disorder is quite common in victims who have experienced traumatic situations. In this sense, the popular suspense and fiction series Stranger Things has some very interesting characters that help us understand it.

Living great adventures and defeating evil monsters is more difficult than it seems. After a year has passed, the characters return for a second season. This second season is full of suspense and mystery.

Keep reading to learn how post-traumatic stress disorder affected people like Will, Eleven, and Joyce. However, we want to warn you that this article contains spoilers. You decide whether to keep reading or not.

Stranger Things, where the supernatural stalks you

Stranger Things was created by the Duffer Brothers in 2016. Launched through the Netflix platform, the series has 17 episodes divided into two seasons. Netflix released the second season in 2017, and it’s confirmed that a third season is on its way.

Eleven grew up in Hawkins National Laboratory. She was born with a set of unusual skills and the scientists at the laboratory wanted to use her powers for political reasons. At the beginning of the series, Eleven escapes from the laboratory. After she escapes, she meets Mike and his friends.

Mike, Dustin, and Lucas are Will Byers’ friends. However, Will has recently gone missing. Although nobody knows at this point in the series, a monster from a parallel universe abducted Will. In this parallel universe, Will must hide from the terrible monster, cold and hungry.

The first series develops over the course of a week. Will’s mother, Joyce, and the police chief, Hopper, are looking for Will. Joyce and Hopper also discover the great supernatural conspiracy involving the government.

At the end of the first season, Will’s friends and family rescue him from the other world. At this point, the second season begins. Will’s mom and older brother try to make life normal again for Will. However, Will experienced a profoundly traumatic event and going back to normal will prove difficult.

Remember that trauma is a situation that threatens the psychological well-being of a person. In this way, a trauma alludes to a situation in which the person perceives a threat that generates a very intense fear. Like many survivors of overwhelming experiences, Will begins to suffer from post-traumatic stress disorder.

This disorder (called PTSD) can develop unexpectedly at any time after a traumatic situation (it doesn’t have to be immediate). Like the trauma, PTSD is violent and unexpected. Its effects are varied and can be easily confused with other disorders. For example, in some cases, a person may suffer from depression and PTSD at the same time, which complicates the diagnosis.

During the series’ second season, Will starts to have panic and dissociation attacks. In addition, he starts to have episodes in which he imagines being back in the world he was initially trapped in.

Some specialists explain the anniversary effect as a strange configuration of factors. The most relevant factor, though, is the environmental nature that triggers unpleasant memories and sensations. This effect can be triggered by smells, colors, sounds, or even flavors that were experienced during the trauma.

Many times, once the anniversary date of the traumatic event has passed, the symptoms of post-traumatic stress disorder subside almost immediately.

Other manifestations of PTSD in Stranger Things

PTSD can appear in many forms. Will Byers, the main victim in the series, suffers the most from PTSD compared to anyone else in the series. However, many people can be affected when a traumatic event occurs.

Among the most common symptoms of post-traumatic stress disorder are recurring memories that are extremely life-like and often refer to the traumatic situation. In addition, a person with PTSD may be easily irritable or agitated. They may also have a certain preference for social isolation or could be hostile.

Some who suffer from PTSD experience episodes that are so intense that they endanger their own health. Some affected by PTSD have nausea, stomach problems, and severe migraines. Other patients lose interest in activities that once gave them pleasure.

Also, many people with PTSD may feel guilt and loneliness. These symptoms are associated with a depressive disorder. Therefore, it’s important to see a specialist after experiencing a traumatic event. Seeing a specialist helps the victim treat and overcome the possible effects of PTSD. There’s nothing wrong with asking for or receiving help.

It’s important that those affected by PTSD don’t feel embarrassed by their symptoms. PTSD is a much more common disorder than we think. However, it can easily improve with the right evaluation and intervention.

“Don’t do things just because other people tell you that you should do them.”

Culture
Travel While You Can!

You might think that travel is a way to escape from life, to give yourself time to disconnect and reflect. In reality, however, the need to travel reflects the desire to prevent life from escaping…