The Story of the Famous Desiderata Poem 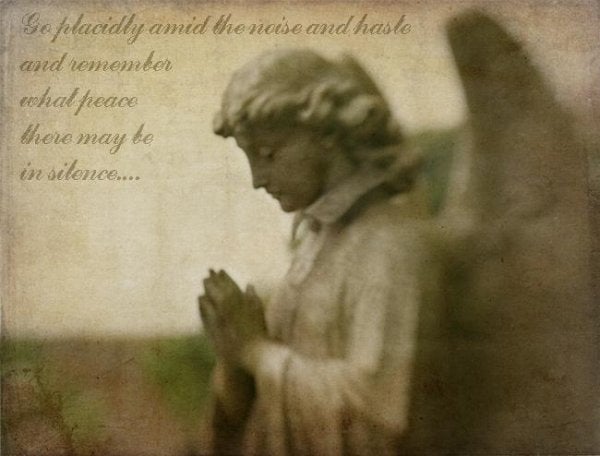 The word “Desiderata” comes from Latin and means “things that are desired.” It is also the title of an extremely famous poem that gained particular fame in the sixties as a result of the hippie movement. The text is a compendium of wise advice that turned the whole world on its head due to the precision of its ideas and the profoundness of its content.

At a certain point, a large debate broke out over the origins of this poem. A legend was woven around the text saying that it had been written by an anonymous monk and that it had been found later on the bench of a church in Baltimore two hundred years ago. According to this version, the poem was written in the year 1692.

In reality, this was all a mistake. The author of “Desiderata” was the philosopher and lawyer Max Ehrman. But the text was never published while he was alive. It did not come to light until 1948 when his wife published his poems posthumously.

The mistake originated from the fact that for many years, “Desiderata” was a poem that circulated from hand to hand, as a sort of act of good will. It turned into something of a manifesto. People who read it sought to to practice everything that was written there.

Many chose not to write the name of the author and so it arrived in the hands of a pastor in Maryland who compiled various texts to make a special Christmas edition. Among these texts was “Desiderata,” and beside the name, the Presbyterian wrote down a legend: “Saint Paul’s Church, 1692.” He only wrote this information to identify his temple and the year of its foundation.

One of the parishioners fell in love with the poem and asked a newspaper to publish it. No sooner said than done, and then the mistake that it dated back to 1692 and had been found in Saint Paul’s Church became widespread.

Whatever the case may be, the truth is that it is a beautiful text that has been translated into more than 70 languages.

Here is the text of this marvelous poem:

“Go placidly amid the noise and the haste, and remember what peace there may be in silence. As far as possible, without surrender, be on good terms with all persons.

Speak your truth quietly and clearly; and listen to others, even to the dull and the ignorant; they too have their story.

Avoid loud and aggressive persons; they are vexatious to the spirit. If you compare yourself with others, you may become vain or bitter, for always there will be greater and lesser persons than yourself.

Enjoy your achievements as well as your plans. Keep interested in your own career, however humble; it is a real possession in the changing fortunes of time.

Exercise caution in your business affairs, for the world is full of trickery. But let this not blind you to what virtue there is; many persons strive for high ideals, and everywhere life is full of heroism.

Be yourself. Especially, do not feign affection. Neither be cynical about love; for in the face of all aridity and disenchantment it is as perennial as the grass.

Take kindly the counsel of the years, gracefully surrendering the things of youth.

Nurture strength of spirit to shield you in sudden misfortune. But do not distress yourself with dark imaginings. Many fears are born of fatigue and loneliness.

Beyond a wholesome discipline, be gentle with yourself. You are a child of the universe no less than the trees and the stars; you have a right to be here.

And whether or not it is clear to you, no doubt the universe is unfolding as it should. Therefore be at peace with God, whatever you conceive Him to be.

And whatever your labors and aspirations, in the noisy confusion of life, keep peace in your soul. With all its sham, drudgery and broken dreams, it is still a beautiful world. Be cheerful. Strive to be happy.“

How can we get to know ourselves if we don't even know who we are? Can we know where we're…

Culture
The Importance of Getting a Good Night's Sleep