Sappho - Biography of a Silenced Woman

Sappho was a woman silenced by time, censorship, and history. In this article, learn all about her! 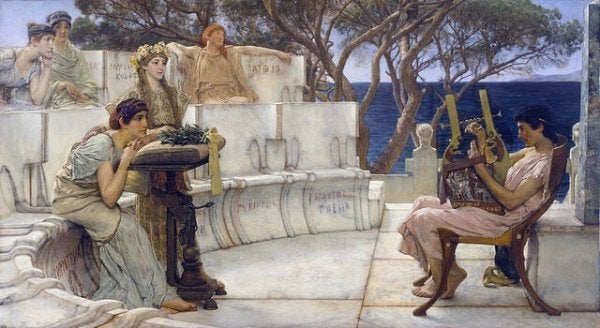 Usually, the names of many males come to mind when one thinks of Ancient Greece: Plato, Aristotle, Socrates, Epicurus, etc. It doesn’t matter if they were politicians, philosophers, mathematicians, or writers. As you can see, it seems there were very few prominent females. Of course, this isn’t exclusive of Greece and seems to be a pattern throughout recorded history. However, there’s one name that shines with its own light among the male crowd: Sappho.

Historians refer to her as “Sappho of Mytilene”, “Sappho of Lesbos”, and, most of the time, simply as “Sappho”. Many name variations for a woman indeed, one whose poetry made it to this era although utterly fragmented, silenced by time. The more you hear about her life, the more you realize that all the world knows about her are mere assumptions drawn from her verses.

Sappho’s poetry is absolutely feminine and she seems to have banned everything related to men. Traits such as strength, rudeness, and manly attitudes have no place in her verses. There’s only a small part of all her works available, but Sappho’s poetry is so important it even gives its name to the Sapphic stanza and the Sapphic verse.

Homosexuality, femininity, poetry, and silence. Her poetry is still silenced today, both by time and in the classroom. And this is because there’s hardly any talk about Sappho and her poems are barely ever recited. Silence put a dent in the poetry of this woman whose life is still a mystery. It’s all idyllic and hypothetical because there’s very little information about her.

There’s proof of the importance of Sappho in Ancient Greece. But only because she’s part of the Nine Lyric Poets. That is the list of most remarkable poets. The authors that people considered worthy of study and whose work was an example. Her influence was such that Plato referred to her as “the tenth muse“.

Sappho lived most of her life on the Greek island of Lesbos between the 7th and 6th centuries B.C. And some say that he spent a brief period in Sicily. Because she belonged to the wealthy social class, she was able to start a school or circle of women. “The House of the Muses” was its name. Of course, wealthy women attended this school in preparation for marriage. However, they also learned poetry and learned to make garlands, among other things.

Some researchers identified a certain religious component in “The House of the Muses”. In fact, they linked it to the worship of the goddess Aphrodite. Sappho’s poetry is all about this goddess. For instance, she wrote “Ode to Aphrodite“, a poem. You could compare this school to Plato’s Academy. However, it was for women only. In addition to wedding odes, they composed many other poems, learned to dance, and studied art.

Unlike other institutions that prepared young women for marriage, Sappho’s school didn’t exactly celebrate motherhood. It was love they worshipped. In there, the purpose of women wasn’t only to conceive children. Instead, they tried to approach beauty and the pleasures of love. You can see all of this in her poetry. It’s quite a departure from male poetry, usually about heroes and wars.

Perfection is the main characteristic of Sappho’s poetry. This is because it’s intimate and sentimental, a clear contrast to male epic poetry. In a militarized society, Sappho rescued love and femininity. She moved away from politics and enveloped the world with much-needed sensuality. However, even though there was no room for politics in her poetry, some believe she did have some political affiliation. Perhaps supporting the oligarchy against a democracy. (This is mainly understood in the context of her era, not in the current one). It was this rebel attitude that supposedly sent her into exile in Sicily.

Sappho modified the Aeolic verse in what was the precursor to the Sapphic stanza and Sapphic verse. The Sapphic stanza is made up of four verses: three Sapphic hendecasyllables and an Adonic. According to the dictionary: “In Greek and Latin poetry, a Sapphic verse has eleven syllables distributed in five feet.” Sappho not only revolutionized the poetry subjects but was also innovative in their form.

Many of Sappho’s verses were lost, burned, or banned with the rise of Christianity, mainly throughout the Middle Ages. However, Sappho survived despite this silence. In fact, some later authors such as Petrarch, Byron, and Leopardi made sure that her name didn’t fall into oblivion. It’s no accident that Catullus chose Lesbia as the name for his beloved. It was a clear allusion to the island of Lesbos.

Sappho wrote about several loved ones in her poetry. But she dedicated several verses to Atthis, so she stands out. The poem “Farewell to Atthis” is about how much Sappho regretted that Atthis had to marry a man. It says that their love was mutual and both regretted the separation. Sappho’s love was authentic, it wasn’t a mere contemplation, as it happens with many male authors. Instead, it was her love that she wrote about.

In the poem “Ode to Aphrodite”, Sappho proposed a new revolution. In it, she speaks of jealousy, desire, sadness… People just didn’t concern themselves about these kinds of feelings in Ancient Greece and relegated them to the divine. For the ancient Greeks, the explanation for these feelings is never earthly. However, Sappho went beyond it and merged the earthly with the divine. In the same poem, she begs for Aphrodite to help her. She tells her that she’s in love with a woman who ignores her, and asks for help.

As you can guess when someone talks about lesbian or sapphic love they’re referring to Sappho of Lesbos herself; hence its meaning of “love between two women”. Love was one of the gems of her poetry, and also the reason to silence her. Even when her love was pure, individual, and an elevated feeling worthy of intelligent poetry. Unlike what people understood in later centuries, sapphic love wasn’t low, vulgar, or purely sexual, but highly sophisticated. This is because the women at “The House of the Muses” were free thinkers.

So lovely a figure with such a simple language, capable of mixing the earthly with the divine, couldn’t have an abrupt end. Thus, her death is mythic and, most likely, far removed from reality. Ovid and many other Greek and Latin poets spread a false legend about Sappho’s death. In it, they said that she was in love with Pharaoh and threw herself into the sea from the Leucadian cliff, due to the desperate passion she felt for him.

This mythic and tragically romantic image deeply contrasts with the one in a poem that scholars were able to reconstruct about her. It’s a poem in which he speaks of old age and the passage of time. One in which she reflects about the youth of her students and the aging of her own body. Undoubtedly, Sappho deserves recognition, celebration, and vindication as a woman who lived as she pleased. A woman who enjoyed love, poetry, and even the company of her students.