Relationships and Tensions during Confinement

Tensions during confinement are common in people who live together. Read on to learn more about this! 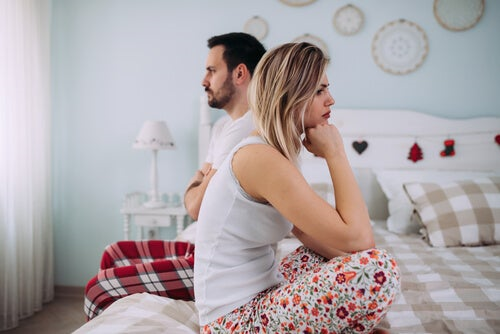 Lockdown shouldn’t have to be a serious problem for most of us. However, tensions during confinement have become common due to the restrictions. In this regard, it’s worth analyzing the source of these tensions in order to know how to respond to them.

In principle, staying at home with a partner or relatives for a prolonged period of time would have to involve an adjustment to certain habits. On the other hand, many of the tensions experienced during confinement already existed before. Forced coexistence has only increased them.

The current situation is the product of a sudden change that required rapid adaptation. In addition to this, the context is one of uncertainty. Because of that, it’s logical for people to feel anxiety and stress.

So much pressure makes people more irritable. However, this doesn’t have to lead to serious conflicts nor intensify tensions during confinement.

“Nothing in life is to be feared, it’s only to be understood. Now’s the time to understand more, so that we may fear less.”

Confinement intensifies contact between people living in the same house and, in turn, this imposes its own restrictions. Before the lockdown, every family and couple had their own coexistence arrangements. But confinement has completely changed them.

The areas that people only partially shared before are now occupied on a near-constant basis. The same goes with the available resources, such as computers, televisions, and even specific rooms and areas.

If everyone has a good attitude, the tensions during confinement can be overcome relatively quickly. When it comes down to it, it’s only a matter of reaching reasonable agreements, where each party gives and takes for the common good. Mutual aid takes precedence over individual interest because that’s what families and relationships are all about.

Of course, negotiations don’t always take place in the best possible way or come to a successful conclusion. In fact, in several countries, especially in Latin America, domestic violence cases during confinement have increased. In many cases, the lockdown isn’t to blame per se, as this is simply the result of the state of those relationships before this confinement.

Tensions during confinement can intensify. In these cases, the latent conflicts are more dangerous than ever, since they can implode at any moment, making coexistence unbearable.

In the past, physical distance helped dispel tension. But confinement has eliminated this possibility. In a normal course of events, people face conflicts when they’re ready to do so, not when they’re forced to. So what can people do in these types of situations?

How to make progress

Tensions during confinement won’t going to go away on their own. In this sense, dealing with incompatibility between family members is quite different than dealing with an addicted person in your very home. Likewise, it’s much easier to deal with indifference or rudeness than aggressiveness or violence.

People who are at risk should seek outside help and find a way to move from their home, at least temporarily. Thus, don’t wait for things to get worse in order to make a decision.

If the conflict isn’t extreme, then it’s best to start by setting boundaries and dividing personal space. This means deciding on times for being in certain areas and for using certain resources. If coexistence is very difficult, then it’s a good idea to establish routines without the need for constant interaction.

Many psychologists are offering their services online, even for free. When faced with rising tensions that are difficult to bear, it may be a good idea to consult one of these experts and listen to their advice. For some people, this could even be an opportunity to solve other underlying problems.

The Ten Commandments for Dealing with Conflict in Your Relationship
As much as you'd like get along with your significant other 100% of the time, sooner or later there will be conflict in your relationship. It's inevitable. Read more »

Conflicts
Putting People Down: A Subtle Form of Aggression

Conflicts
Couples in Summer - Together But Not Messy

Interesting Articles
Stories and Reflections
Since I Lost Her, I Knew She Was For Me

Emotions
5 Emotions that Come with a Personal Crisis