Quattrone and Tversky's Experiment on Self-Deception

In Quattrone and Tversky's experiment, it became clear that people have a strong tendency to tell lies to each other and believe them. We change or suppress information, sometimes consciously, sometimes not, to avoid internal conflicts and problems. 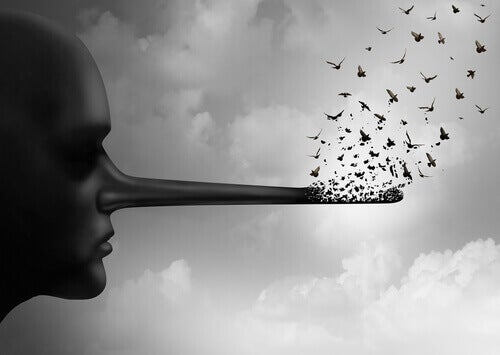 If someone were to ask you, you’d probably say you never get involved in lies and deception. Most of us believe that we live by the truth and that we’re completely sincere in most of our words and actions. However, Quattrone and Tversky’s experiment proved that this isn’t the case.

Quattrone and Tversky’s experiment was conducted in 1984 and was initially published in the Journal of Personality and Social Psychology. The main goal of this study was to prove the existence of a cognitive bias known as the confirmation bias. This has to do with the need to convince ourselves that what we think is true is true, whether it is or not.

This confirmation bias is all about lies and deception. However, in this case, such lies mainly focus on ourselves. We’re talking here about self-deception. This is a process in which we stop seeing, or taking into consideration, aspects of reality that contradict our beliefs or that make us uncomfortable.

Quattrone and Tversky’s experiment shows that we often deceive ourselves. We don’t do it with bad intentions, or out of disrespect for the truth. It’s simply a mechanism that helps us avoid facing painful or uncomfortable aspects of reality.

Quattrone and Tversky’s experiment was based on a group of 34 volunteers. The researchers told them that they were carrying out research on “the medical and psychological aspects of athletics”. Although it wasn’t true, it was necessary for them to believe that it was.

Then, the researchers asked them to immerse their arms in cold water. The researchers told them that their level of resistance to the cold water was a very important indicator of their overall health. This wasn’t true either. They asked them to do other kinds of tasks as well. These included riding bikes and similar activities, which were intended to be just distractions.

At the end of all this, they talked to the volunteers about “life expectancy“. In the talk, the researchers told them that there are two kinds of hearts. Type I was more resistant and, therefore, less vulnerable to developing heart disease over time. Type II, on the other hand, had weak heart that was prone to disease.

A twist in the experiment

After this first phase, Quattrone and Tversky’s experiment took a twist. The group of volunteers split in two. Separately, the researchers told group one that the arms immersed in cold water were an indicator of whether each of them had a type I or type II heart.

After this, all the volunteers were asked to put their arms again in cold water so that they could evaluate them again. The results were curious. The members of the first group let their arms under cold water for a lot longer than when they first did the experiment. With the other group, the opposite happened.

The conclusions of the experiment

In order to make their final conclusions, the researchers asked all participants one question. They asked them whether the information about the two types of hearts had made them endure more or less with their arms in the cold water, in order to prove that they had a strong heart. Of the 38 volunteers, 29 denied it. They were then asked if they believed they had a healthy heart. Sixty percent of those who had denied that they had been influenced by the heart information said yes.

According to the researchers, the results proved that we have a strong tendency towards self-delusion. Some suppress true information completely, just to prove to themselves (and others) that they’re right. By doing so, they avoid situations that may be unduly uncomfortable or worrying.

White Lies, Compulsive Lies, or Pathological Lies – What’s the Difference?
We teach children that lying is bad but some lies are socially acceptable. We call them white lies, and everyone uses them to some degree. Read more »

The Washoe Project is both fascinating and moving. It involves a female chimpanzee named Washoe, considered the first non-human animal…