The Beautiful Parable of the House Without a Master 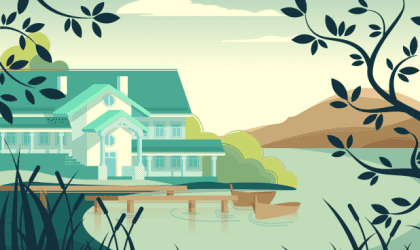 The parable of the house without a master tells the story of a family composed of a mother, a father, and their 9-year-old son. The three of them lived in a beautiful house where, fortunately, they always had everything they needed. Both the mother and the father always made sure of that. They both worked so they were able to live comfortably.

The boy was obedient and did very well in school. The nanny would always pick him up from school every afternoon. Then, she’d take him home, where a delicious lunch was always waiting for him. The mother would always leave precise instructions so that her son ate healthy and nutritious food.

In the afternoon, both the mother and the father would call home to check up on their son. They did this because when they came home, the boy was usually already asleep. This was their way to maintain contact with their son. The parable of the house without a master tells us that the boy felt thankful, but also lonely.

One day, the mother came home from work and saw that her son was waiting for her wide awake. She was surprised since it was late at night. Had something happened? Was he sick? She was worried so she started asking him all kinds of questions. The boy asked her to calm down. He was just waiting for her because he wanted to ask her something.

This parable tells that the mother sat down next to her son and gave him all her attention. She was willing to listen to what he had to say. The boy asked her, “How much do you make per hour at your job?” The mom felt very confused. She wasn’t expecting that question.

Before answering, the mom asked: “Why do you want to know that? Do you need anything? Do you want me to buy you something?” The boy just said he wanted to know the exact amount. Still confused, the woman replied, “Up to €100 an hour.” The boy seemed satisfied. He then proceeded to say goodnight to his mother and go to bed.

The woman was left feeling worried. She thought that her son’s question was a sign that something was wrong. She didn’t think it made any sense. Did he want to ask her for something and couldn’t? Did he have money problems? When the father came home, she told him what had happened. They both agreed to pay more attention to their son.

Two months later, nothing new had happened. The parents thought he had only asked that because he was genuinely curious. However, one night, the father came home very late at night, as per usual. The boy got out of his room and found his father. He was waiting for him. The father was surprised. Had something happened? Was there a problem?

The kid proceeded to ask him the same thing he had asked his mother, “How much do you make per hour at your job?” The father immediately responded, “I make €100.” After thinking about it for a few seconds, his expression changed. He asked his son, “What are you thinking of?” However, his son said nothing. “Tell me what you want!” asked his very upset father. “Nothing, nothing,” responded the boy, who was quite frightened.

After that, the father decided to call the nanny. He wanted to know if she had noticed him behaving strangely or out of the ordinary. She said no. Perhaps the only thing that was different now was that the boy went to a friend’s house every afternoon and always came back a few hours later.

The ending of the parable of the house without a master

The father suspected that his son was hiding something. For this reason, he postponed some tasks at work and decided to spy on his son. He wanted to know the reason why he would go to his friend’s house every afternoon.

As per usual, the boy went to his friend’s house. The father noticed that this son spent his time there cutting the grass and washing cars. He then came back home.

The father then asked his son what was going on. Why was he going to his friend’s house to work? Why was he so concerned about money? The kid was surprised, so he decided to confess. He was working because he needed money. “I’ve already made €200,” he said. “Now, I’ll be able to pay mom so she can hang out with me for two hours. I only have to make €300 more so I can pay you too.”

The parable of the house without a master is a great lesson for those parents who spend more time at work than with their children. Making kids happy doesn’t necessarily mean buying them what they want whenever they want. No matter how happy material things can make them feel, the most vital thing for them is having an emotional connection with their parents.

The Inspiring Parable of the Unscented Flowers
Anger is a terrible thing. How can we possibly control it? Today we bring you an amazing parable which some valuable lessons about this destructive emotion. Read more »
Link copied!
Interesting Articles
Culture
Method of Loci: A Wonderful Mnemonic Device

The method of loci is a very ancient mnemonic device that can train our mind in the art of storing memories. It's based on getting…

Curiosities
The Levels of Consciousness and Their Colors

Ken Wilber is an American author who's focused his work and studies on philosophy, mysticism, ecology, and spiritual evolution. His…