When You're Your Own Worst Enemy

Have you ever felt that you were your own worst enemy? To defeat your internal enemy, the first step is recognizing that you have a problem. 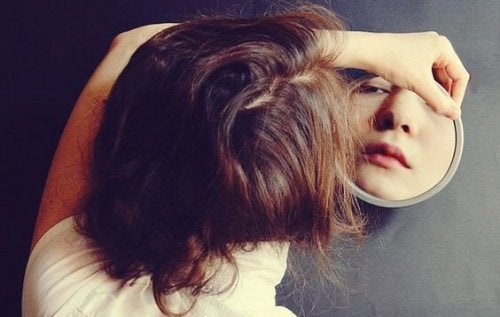 Have you ever felt that you were your own worst enemy? There’s no doubt that living a full life and achieving our desires isn’t easy. In fact, this is a journey with a beginning, but no end.

On the other hand, we may also have to deal with difficult economic, work, or household situations. We may also be dealing with some internal conditions, such as suffering from a disease or a misfortune.

We’re also internally competing with other people who are trying to achieve the same goals we are. These people can be your enemies, but sometimes you’re your own worst enemy.

People who have everything but feel unhappy

Some people who seem to have it all feel unhappy. In theory, they have no obstacles or enemies. So what’s the problem? What’s going on?

A person who is their own worst enemy may have created obstacles themselves by how they judge themselves or the unrealistic goals they set. This is something we’ve all done at some point, and that we’ll keep doing. These self-imposed burdens can have a lot of negative consequences.

The importance of judging ourselves objectively

Loving ourselves means recognizing our own worth and considering ourselves as important as anybody else in our lives. For many people, this isn’t always easy. Namely, it’s because they don’t know how to judge themselves objectively.

People who don’t know how to judge themselves objectively are capable of praising others’ virtues, as well as forgiving their biggest mistakes and flaws. However, they’re tremendously unfair with themselves. They’re often very demanding and cruel and, as a result, they’re their own worst enemy.

This can lead to a deep bitterness that will eventually lead to depression and neurotic behavior. You have to know how to value yourself objectively and not compare yourself to others. Only by doing so will you stop being your own worst enemy.

Your experiences can make you become your own worst enemy

In general, being your own worst enemy results from experience. Children are self-centered by nature. They have no social conscience and think that everything around them belongs to them or that they’re the center of the universe.

This idea is corroborated by the fact that children are usually the center of attention. Later on, through education and socializing with other children, they finally discover that there are more people around them. Then, they discover that these people deserve respect and consideration just like they do.

When a person grows with this philosophy in mind, it’s not uncommon for them to end up confused by what is fair and what is considered reprehensible selfishness. To avoid those terrible feelings of guilt, they choose to deny themselves any deserved self-recognition. They behave as if they’re their own worst enemy.

On the other hand, some moral or religious teachings state that humility is one of the most important virtues. Therefore, lacking this virtue is a sin and would bring about punishment. A person who believes this to be true limits themselves rigorously. They consider that there’s only one correct way of acting in certain situations.

You can stop being your own worst enemy

In order to defeat your internal enemy, the first thing you need to do is recognize that you have a problem. Observe your daily behavior and your thoughts. Take a look at how many times you deprive yourself of small pleasures because you think you don’t deserve them.

Begin to encourage your small achievements and positive efforts with small rewards and compliments. Maybe without realizing it, one day you’ll start working towards what’s most important to you and, most importantly, what you deserve.

Self-destructive People: 10 Characteristic Traits
Self-destructive or self-harming behavior seems completely illogical and typical of madness. However, it's a negative impulse that we all have. Read more »
Link copied!
Interesting Articles
Culture
Indira Gandhi: The Iron Lady of India

Culture
Meditating: Being Aware of Your Mind