Certain defiant behavior can be both normal and necessary in a person's life cycle. A person needs it in order to establish their individuality and to be able to establish internal standards and controls. But what happens when this behavior is taken to extremes? 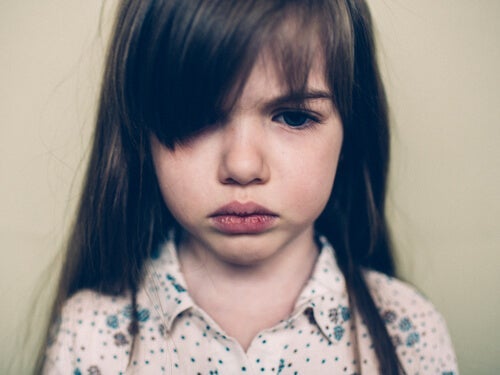 Oppositional defiant disorder (ODD) is characterized by a recurrent pattern of uncooperative, defiant, negative, irritable, and hostile behavior toward parents, peers, teachers, and other authority figures (1).

The DSM-5 (2) groups it under the heading of disruptive, impulse control, and conduct disorders. Other disorders under this heading are intermittent explosive disorder (IED) and antisocial personality disorder (ASPD).

Although defiance may be common in children, from time to time, it may develop into such a disorder. Oppositional behavior can take different forms. The child may present extreme passivity (not obeying systematically by being passive or inactive).

On the contrary, they may also use negative verbalizations, insults, hostility, or physical resistance. This can include aggressiveness towards authority figures, be they parents, teachers, or educators (3).

The prevalence of ODD varies depending on the nature of the population studied and the methods of assessment. Rates of oppositional defiant disorder have been found to range from two to 16 percent (1). This disorder can appear as early as three years of age. However, it usually begins at around eight years of age, with onset after adolescence being rare.

It’s normal for negativistic symptoms to emerge in the family environment. However, over time, they can occur in other environments as well, such as at school, for example.

This disorder affects approximately two to 16 children and adolescents out of every 100. It’s more frequent among young people from families of a low socioeconomic level.

A certain degree of defiant behavior may be both normal and necessary in a person’s life cycle. A person needs it in order to establish their individuality and to be able to establish internal standards and controls (1). Oppositional defiant symptomatology may appear as a reaction to a major life event. An accident or a traumatic event are examples of this.

It can also be a defense against feelings of inadequacy, incompetence, anxiety, loss of self-esteem, or submissive tendencies.

Since aggressive behaviors may be related to biochemical and hormonal factors, experts believe that they may play an important role in the occurrence of negativistic behaviors.

This theory holds that the negative characteristics of the disorder are attitudes that young people learn from negative techniques employed by parents and authority figures. Some of these are punishments, yelling, or even hitting.

There aren’t any distinctive family parenting patterns as such. However, research has found that many of the parents of children or adolescents with this disorder take an exaggerated interest in power and control over their children.

In addition, the family environment may play a role in the occurrence of this behavior. Experts have observed stubborn siblings, depressed and controlling mothers, and also passive-aggressive fathers in some families.

An example of the latter could be a father who ignores his children’s education, but, nevertheless, criticizes any intervention by his partner.

In order to diagnose this disorder, psychologists will usually conduct an interview with the parents first. In this interview, the psychologist will be able to determine how the child or adolescent has behaved during their life cycle.

A direct examination with the child or adolescent and a review by school teachers will also be necessary. They will require a complete medical history (including family, personal, pathological, and developmental history), as well as knowing when to consult with other specialists, and when to refer to another level of care (1).

Treatment for this disorder should be based on individual, family, and group psychotherapy. It involves working with both the child and the parents.

The goal with this type of therapy should be to increase the child’s ability to:

In addition to individual psychotherapy, it’s essential to consider communication and family interaction in this type of disorder. Parents or guardians of the child will sometimes need help from a professional in order to develop some parenting skills for the child or adolescent.

In conclusion, we can say that oppositional defiant disorder doesn’t exclusively affect the child or adolescent. It also affects the family, teachers, and peers. Its origin seems to be mainly psychosocial and may be related to the child’s or adolescent’s upbringing.

This disorder must be treated as soon as possible. Otherwise, it may evolve into a major behavioral problem, such as an antisocial disorder.

Cognitive Therapy for Personality Disorders
One could say Aaron Beck as the father of cognitive therapy, it's proven to be effective in all sorts of personality disorders. Read more »
Link copied!
Interesting Articles
Clinical Psychology
Memory and Trauma: What's the Link?