Have you heard of night eating syndrome? In this article, we explain what it is and how it is treated. 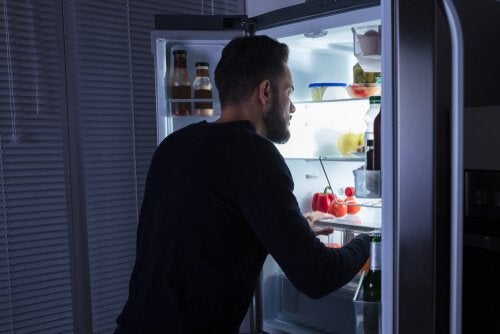 Night eating syndrome is either classified as an eating disorder or sleeping disorder. The category that it falls into depends on whether or not the individual is awake when they’re binge eating. In either case, this syndrome is defined as binge eating large quantities of food after dinner or in the middle of the night, with a preference for calorie-rich and carb-rich foods.

German researchers Zwaan, Muller, Allison, Brahler, and Hilbert estimated that night eating syndrome (NES) affects 1.5% of the population and has serious health consequences in 2014. In this article, we’ll talk more about the symptoms, causes, and treatment of NES. While it’s a rare syndrome, it’s serious enough to deserve our attention.

What is night eating syndrome (NES)?

Dr. Albert Stunkard was the first to talk about night eating syndrome (NES) in 1955. The Diagnostic and Statistical Manual of Mental Disorders (DSM-5) classifies it under Other Specified Feeding or Eating Disorder (OSFED). Sleep-related eating disorder is similar to this one. The difference between the two is that people with NES are awake when they’re eating. People with sleep-related eating disorder actually eat in their sleep.

When the individual is asleep while they eat and unaware of what they’re doing, we’re dealing with a subtype of sleepwalking. It happens during REM sleep and is characterized by very deep sleep cycles. An individual with this disorder will wake up and eat compulsively without realizing it. They might seem like they’re awake and they can open the fridge, chew, and swallow. Just like sleepwalkers, sleep-eaters have no idea what they’re doing and don’t remember anything the next morning.

In the case of night eating syndrome, however, the person is awake the whole time and they remember everything. This is also a case of compulsive eating, but it’s somewhat voluntary.

What are the symptoms of night eating syndrome?

Night eating syndrome is easy to diagnose due to frequent episodes of compulsive eating during the night or before bed. In other words, it seems like food addiction. Even though the individual doesn’t want to eat or is trying to lose weight, they binge eat at night. While it isn’t easy for a person to admit or recognize their problem, they’re awake and aware of their actions.

On the other hand, sleep-related eating disorder is much more difficult to diagnose. What usually happens is that a friend or family member will find the person sleep-eating or they start to gain weight without knowing why. Another possibility is that they notice things disappearing from the fridge and no one remembers eating them. However, since people with this problem eat during very deep sleep, it’s very unlikely that they’ll realize they have a problem.

Both cases are characterized by an exaggerated and compulsive pattern of eating after dinner or in the middle of the night. Psychologists will only give this particular diagnosis after ruling out other psychological or psychiatric problems.

In the case of NES, the individual uses food to escape from depression and anxiety. Eating is a coping mechanism to deal with their problems. It develops just like food addiction. People with NES feel an urgency to eat and they can’t calm down until they do.

Sleep-related eating disorder (SRED), on the other hand, is caused by a glitch that happens when the person wakes up. They aren’t prepared to wake up, but when they do, their motor system of voluntary movement activates. That, in turn, triggers “automated” actions or well-learned behaviors like walking, talking, and eating. That’s why most people with SRED aren’t aware of their behavior. They might wake up while they’re eating without understanding what they’re doing or how they got there.

In all cases, these nighttime eating disorders are more common in people with obesity. They usually have something to do with hormone imbalance (melatonin and cortisol) and neurotransmitters such as serotonin. Consequently, different studies show that certain drugs can effectively treat these disorders. These studies specifically studied drugs such as selective serotonin reuptake inhibitors (SSRIs), melatonin (the sleep hormone) and drugs that reduce the stress response (Zapp, Fischer, and Deuschle, 2017).

In general, disruptions in sleep patterns and circadian rhythms tend to lead to nighttime eating. While we don’t have many studies on the causes of these disorders, experts assume that factors such as anxiety, stress, obesity, and circadian rhythm disruptions are the most likely causes. Coping strategies that focus on the emotion and not the problem are also related to compulsive eating. Psychological intervention for this type of eating disorder should certainly deal with those coping strategies.

Treatment for a nighttime eating disorder

Both NES and SRED require a multidisciplinary treatment approach. Nutritionists get involved to help the patient lose weight. Psychiatrists prescribe any necessary drug, and psychologists help them manage their problem on a behavioral, emotional, and cognitive level. It’s important to keep in mind that the physical consequence of weight gain isn’t the only side effect. People with these disorders are dealing with high levels of anxiety and depression. They need psychological treatment to help them overcome their problem.

On the other hand, there are also measures that they can take to help them break the cycle of binge eating. Locking their fridge, locking their bedroom door, or coming up with something that will help them wake up if they get out of bed can all be effective measures.

Likewise, if the problem is an eating disorder, the patient will need therapy to help with insomnia. That’s because eating helps them fall asleep. If they aren’t allowed to eat before bed, they might have trouble falling asleep. Whatever the case, a person who’s suffering from a nighttime eating disorder will have to make a series of changes in their lives to overcome their problem.

Emotional Regulation and Eating Disorders
Emotional regulation is an important skill everyone should foster. However, it is especially important for those who suffer from eating disorders. Read more »
Link copied!
Interesting Articles
Psychology
People With Compulsive Needs: An All Too Frequent Phenomenon

It's easy to say that Nikola Tesla was the genius who illuminated the world. To imagine a world without him,…

Psychology
Is It a Coincidence or Fate?

Coincidences have always sparked curiosity and fascination. Sometimes, everything seems to synchronize inexplicably, so that two seemingly unrelated situations match up. As a result, people have always associated these chance occurrences…