Myths and Facts about Sleep Learning

So far, we only have two concrete facts about learning while asleep. One is that it's possible to learn while you're sleeping, though it has its limits. The second is that scientists still don't understand how or why it happens. 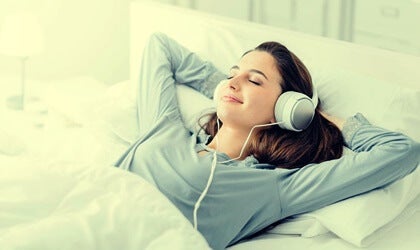 Sleep learning (hypnopedia) has gotten a lot of attention in recent years. Some marketing campaigns claim that all you have to do is play an audio lesson while you sleep and, when you wake up, you’ll have acquired new knowledge. Is that true? What does science have to say about it?

The obvious attraction of this method is that it supposedly requires zero effort to get results. In theory, it’s an effective way to learn something. You end up with new information without not having to try at all. This seems like a dream come true for people who don’t like to study. You go to sleep ignorant and wake up wise!

“Every unnecessary help is an obstacle to development.”

As a marketing tool, this message is obviously very attractive. However, in practice, things are quite different. While the message is rooted in science, they’ve taken it way farther than that. Let’s learn more!

First of all, you could say that learning is a process by which a person’s perspective or behavior undergoes a transformation caused by acquired experiences. Those experiences can be physical or mental. In either case, after learning something, an individual is different from who they were before.

On the other hand, learning isn’t limited to things that you consciously remember. Memory is just a part of the process. Learning doesn’t just generate memories but also attitude changes and the way you see the world.

There are basically two sleep phases: paradoxical and non-paradoxical sleep. The first is also called REM (rapid eye movement) sleep. Science has discovered a relationship between this sleep phase and memory consolidation, but experts still don’t completely understand these mechanisms.

What researchers do know is that the memory that consolidates during this phase is long-term memory. They also know that not completing the REM phase of sleep causes memory loss and stress. If an individual gets external stimuli during this phase, they won’t get proper rest. In spite of all that, is learning while asleep still possible?

To figure out if learning while asleep was possible, the Weizmann Institute conducted an experiment in 2014 that was later published in the journal Nature Neuroscience. The experiment was about learning by conditioning. Researchers subjected sleeping test subjects to a series of different tones. At the same time, they released a particular smell. They repeated that several times. However, they left out the olfactory stimulant the last time.

These results led researchers to conclude that certain kinds of learning are possible while asleep, but there are specific limits. In the first place, the learning that occurred was completely mechanical. There was no rationalization involved. None of the participants in the experiment remembered what had happened the night before and, with time, they stopped associating the sound with the smell. In other words, it was a basic and ephemeral kind of learning.

What surprised the Weizmann Institute scientists was that the learning occurred while the participants were asleep, as limited as it was, was acquired during non-REM phases of sleep. Supposedly, the brain is more receptive to external stimuli during the REM phase, but the experiment yielded opposite results.

So far, what we know and understand about sleep is still far less than what we don’t know. It’s obviously a fundamental part of being human, that much is clear. When you sleep, your brain gets rid of information you don’t need and consolidates what’s relevant to you and your life. Not getting enough quality sleep also has very negative health consequences.

Today, we still don’t have any evidence about learning that requires reasoning while asleep. Nor do we know anything about the duration and extent of other kinds of learning that happens while you sleep. Consequently, your only option for learning new information continues to be the traditional way – for now at least!

Sleep Hygiene: 7 Guidelines for Better Sleep
Many factors influence how we sleep, from the room's ambient temperature to what we had for dinner. Sleep hygiene studies the effects of these factors. Read more »
Link copied!
Interesting Articles
Research
Overtraining Makes People More Impulsive