Current popular music is influenced by the musical style of Louis Armstrong. He was a rather talented African American musician who became a sensation despite the challenging social conditions he faced. 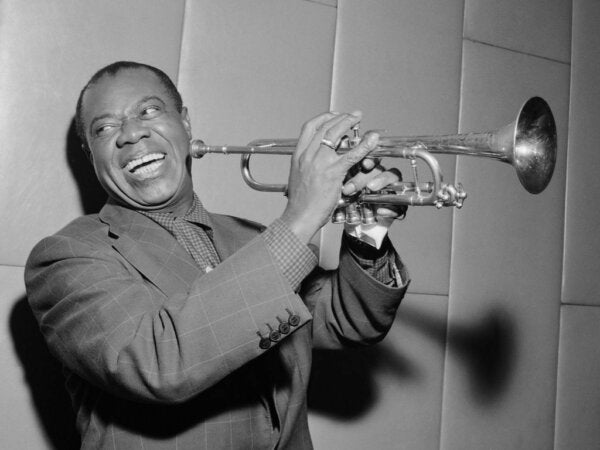 One of the favorite anecdotes of Louis Armstrong took place in the 1930s just before he began a tour with his fellow musicians. The plan was to travel to various towns in the Southern United States and bring jazz to many different places. They even rented a bus and a driver to transport the entire band.

The bus driver looked at them suspiciously and with contempt. After examining them in detail, he decided he was unwilling to drive a group of black, humble-looking men. Thus, they had to get off. Louis Armstrong reminded him that the contract was signed and paid for, but this failed to persuade the driver.

After a few minutes, the police arrived. Louis Armstrong and his musicians were arrested for “disorderly conduct”, despite the fact that they hadn’t even been angry during the dispute with the driver. Thus, they all ended up locked up in a cell at the local police station.

At midnight, one of the group members took out a joint and said to Louis: “Skipper, I think I have something that could cause us problems” and showed it to him. Armstrong replied, “Look, son, I think the only solution is to destroy the evidence”. They both laughed and proceeded to smoke it. Louis Armstrong remembered the episode over and over, in different interviews.

“If you have to ask what jazz is, you’ll never know.”

Louis Armstrong was born in the bad side of the tracks, a bad place to be black and poor: Louisiana. This is one of the most racist states in the United States. Historians think he was born around 1900, but the exact date is unknown.

He lived all his childhood and a good part of his adolescence in a neighborhood referred to as the red right district. Some think it’s the most dangerous place in New Orleans. This is because Storyville was the headquarters of prostitution, the place where most of the unprivileged people in that society lived. Although there were many shady cabarets, the music was great.

The place was also characterized by its Protestant churches, in which a large number of people gathered to express their prayers in the form of songs: gospel music. Louis Armstrong became part of the choir of one of those churches. Many think this was the beginning of his career in music.

He had everything against him

Louis Armstrong’s parents separated shortly after he was born. He ended up living with his grandmother, a highly devoted woman. Then, he moved in with his mother, Mary Ann, a rather broken woman.

Louis had many “stepfathers” during his childhood. Amazingly, his mother knew how to direct him so he didn’t get involved with the illegal businesses that went on in their neighborhood.

On one occasion, there was a celebration and Louis Armstrong, who was just a teenager, grabbed a gun from one of his stepfathers. He then shot it repeatedly into the air. This kind of action was acceptable in his neighborhood. However, there was a plainclothes policeman there who witnessed it and arrested him. He was placed in a juvenile facility. There, the boy took his first music classes ever and learned to play the cornet and the trumpet.

Louis Armstrong – from rags to riches

Once he left juvenile detention, Louis began working as a construction worker during the day and as a musician by night, in the brothels. His talent caught the attention of musician King Oliver, who helped him enter the band Kid Ory shortly afterward. He then became part of another band that played music inside a riverboat.

Later, he went to New York. In 1925, he recorded his first album with the Hot Five. His popularity remarkably spread and, by 1933, he was touring Europe with huge success. He enjoyed 40 years of uninterrupted success. His tour of Africa, in 1960, is one of the most spectacular in the entire history of that continent, according to some people.

Louis Armstrong married four times. The first and third time to two prostitutes, who apparently weren’t good companions. The second time, he married a college-educated pianist who brought a lot to his life. However, they didn’t fully get each other. The fourth time was the lucky one. He finally found the perfect companion, who he stayed with until his death. Louis Armstrong’s music influenced all popular genres.

What Your Taste in Music Says About Your Personality
To begin, we invite you to listen to this song while you read. As this is an article that is dedicated to music, it's only fitting that we include some. Read more »
Link copied!
Interesting Articles
Biographies
Daniel Lagache and French Psychoanalysis