The Letter from Gandhi to Hitler 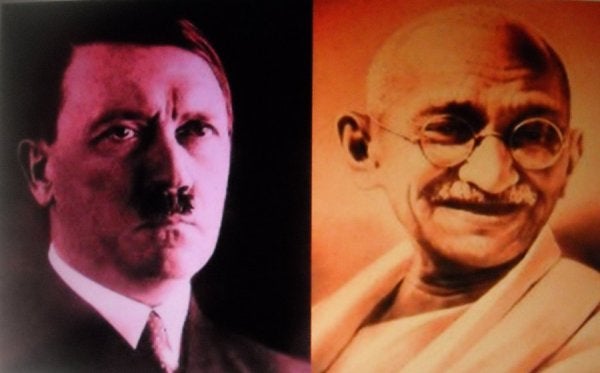 It seems really surprising that Gandhi could have written a letter to Hitler with a greeting like “Dear friend” and ending with “I remain, Your sincere friend.”

Gandhi sent this letter to Hitler in 1939, just as a new war was threatening peace in Europe; it seems that the letter never came into Hitler’s possession, but it a text that reveals an incredible amount about one of the most admired people ever and one who is still admired by us today.

He had a masterful way relating to the world through understanding and humility, which gave him the ability to win thousands of battles without starting a single war. He clearly had plenty of mental dexterity, a form of interpersonal intelligence, that Gadner describes in his theory of multiple intelligences.

Friends have been urging me to write to you for the sake of humanity. But I have resisted their request, because of the feeling that any letter from me would be an impertinence. Something tells me that I must not calculate and that I must make my appeal for whatever it may be worth.

It is quite clear that you are today the one person in the world who can prevent a war which may reduce humanity to the savage state. Must you pay the price for an object however worthy it may appear to you to be? Will you listen to the appeal of one who has deliberately shunned the method of war not without considerable success? Any way I anticipate your forgiveness, if I have erred in writing to you.

Interestingly, this letter was criticized by the public, who believed that he had used too submissive a tone. But Gandhi did not have the slightest doubt: you do not make yourself better understood simply by shouting louder…This had already been shown in his famous, peaceful “Salt March” and in all the protests that he organized in his lifetime.

Gandhi would later send a second letter to Hitler on December 24, 1940, appealing to him to stop the war. Today, these two letters can be found in Mani Bhavan, Bombay, where this “peaceful rebel” lived for nearly 20 years. Mani Bhavan is a simple museum that invites us to better know this important figure.

The history of humanity offers us countless examples of how our the way we choose to face the world can result in the best actions of mankind as well as the greatest atrocities.

And it is because psychology is all over. It is in art and it is in history, it is in the ways we greet our neighbor when we see them on their doorstep or in the way that we address the supermarket employee “who has cut” in that endless line that is getting on our nerves, and it is on the highway when we are driving and there is traffic jam…

To finish up with this reflection, we leave you some other interesting examples from history of how “the mind rules the world” and how it can draw out the best and the worst of us towards others.

What other historic incidents seem important to you for improving our human relations?

“He who really knows what he is talking about has no reason to raise his voice.”

Winston Churchill said that "a good conversation should exhaust the issue, not the speakers." Undoubtedly, a man who negotiated as…

Frida Kahlo lived an intensely emotional life full of precocious learning and controversial temptations. This filled her history with love, struggle, and hope, and showed the world a life beyond what everybody thought…