Kangaroo Grandparents: The True Key to Reconciling Family and Work 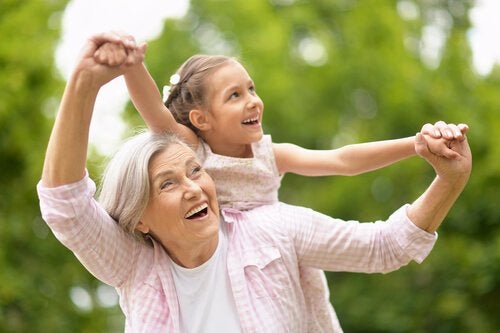 Kangaroo grandparents are fundamental for society. They’re a common sight in school doorways and city parks. They take care of their grandchildren for many hours a day while their parents work. Thus, almost without being aware of it, they become the main educators in the home.

One out of every six people between the ages of 50 and 70 tends to their grandchildren with some regularity. Of these, half do it daily and for more than 12 hours a day, according to IMSERSO’s 2010 Report on the Elderly. The impossibility of reconciling family and work life, a lack of financial resources, and the children’s emotional safety lead families to rely on grandparents as the most important support network when it comes to childcare.

The effective incorporation of women into the workplace for their own self-actualization and, of course, to improve the domestic economy has generated needs in families regarding the youngest members. Thus, grandparents have become the main figure in their grandchildren’s emotional and personal development. Grandparents find themselves at the same level of the child’s own parents or even higher.

Kangaroo grandparents of the 21st century

An increasing life expectancy and active aging programs mean that our elderly have a better quality of life. They can devote more time to caring for their grandchildren. Modern medicine boasts the idea that we should live longer and better. It’s not about reaching 100, but about aging without losing quality of life.

The economic difficulties that many families go through have also been a fundamental reference when it comes to having grandparents as primary caregivers.

Kangaroo parents offer an economically advantageous alternative since many parents cannot afford to pay for a nursery school or a nanny to care for their children. Grandparents tend to care for their grandchildren for hours and don’t impose a closing time or schedule. This makes the parents feel at ease.

The incorporation of women into the workforce

Throughout the last decades, our society has significantly changed the distribution of domestic tasks. Both parents work outside of the home, increasing the difficulties of reconciling family and work. Therefore, whenever possible, grandparents are used as an alternative to childcare.

“Grandparents are magicians who create wonderful memories for their grandchildren.”

Grandparents emotionally support their grandchildren. Emotional and affective bonds are very important between them and arise as the result of shared activity and feelings of relational satisfaction.

Grandparents feel happy to have someone encouraging them to remain active, as well as to be heard and accompanied. In the same way, the affection and illusion with which the grandchildren address their grandparents reinforce their confidence and self-esteem.

Children perceive their grandparents’ affection and closeness, thus generating bonds of trust. As a result, they go to their grandparents in search of support and during moments of anxiety. In this sense, the experience and invaluable knowledge that grandparents provide create a “school of life” for children that includes respect, values, inter-generational games, and love for our elders.

It seems that grandparents are having a very active role in their grandchildren’s upbringing nowadays. Their help is invaluable to parents. They not only care for their grandchildren but teach them and love them with all their heart. Hence, as a society, we owe them so much.

“Surely, two of the most satisfying experiences in life must be those of being a grandchild or a grandparent.”

Grandparents – A Treasure That Benefits Us All
Grandparents are invaluable and unique in our society. There are benefits for the parents and the grandchildren, and also for themselves too. Read on to appreciate the vital role they have to play. Read more »
Link copied!
Interesting Articles
Family
When You're Embarrassed by Your Family